Build-a-Phone Workshop: my first encounter with Moto Maker and a customized Moto X

Share All sharing options for: Build-a-Phone Workshop: my first encounter with Moto Maker and a customized Moto X

As one of the first people allowed into Motorola's Moto Maker program, I had a chance to design the phone I always wanted, to order a phone made by Motorola but designed by me. This was my Jony Ive moment. I was ready.

The Moto Maker tool itself is beautifully designed and incredibly simple. All the options sit in a tabbed sidebar on the right side of a white webpage, and a phone spins in the center — your phone. There are many like it, but this one is yours. First, you pick your back. One of 18 colors, ranging from Navy and Mint (in the "Cool" category) to "Warm" colors like Crimson and Cabernet. A few of the backs are different materials, which is where Moto Maker stumbles a bit; there's just no way to tell how one color feels versus another, so you really need to get to an AT&T store for the whole experience. As you click on an option, the spinning phone in the center automatically changes to match. Next, move to Front; there's just white and black here. There are seven accent colors, too, all of which start with "Metallic." It's not Orange, apparently, it's Metallic Orange.

Spin your phone around to see it from all angles

At any time, turn on the 360-degree view mode for a spinning look at the device you've selected. It's an invaluable addition, showing me that blue accents and a red back look good together, but pair them with a white front and it's hideous. The whole tool is a mix of HTML and Flash, and works well, though the beta encountered a few slowdowns while I was using it and it set the fans on my MacBook Air going full-tilt.

Picking colors is most of the work, but there's more to do in Moto Maker. You can have the phone engraved, with up to 20 characters — "David's phone" fit, but I could only do "This isDavid's phone." There's also plenty you can't say in the first place, of course, including basically every fun thing you could say. Ultimately, I've come to regret every time I've had a gadget engraved, so I left my Moto X blank. I did pick a start-up message, though, so my phone will greet me every time I turn it on. 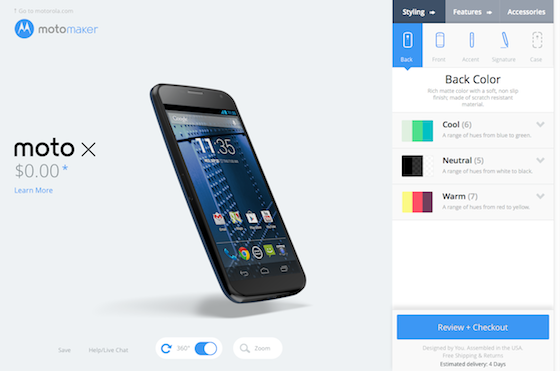 Finally satisfied with the look, I was then prompted to choose storage size (the Moto X will come in 16GB and 32GB models, but my test unit is only 16GB), pick $39.95 headphones from Sol Republic that either matched or complemented my phone, and even decide between white and black wall chargers. I even chose among the many odd-looking wallpapers and logged into my Google account, so my Moto X will be set up when it arrives to me, ready to turn on and start working immediately.

Moto Maker is a tinkerer's paradise, and kind of a paralyzing tool. There are so many choices, and every time you change one you wind up re-doing the whole thing — I decided I didn't like one color of headphones, and somehow wound up picking an entirely new phone. It's a fun, easy, useful tool, and one I hope will be available to more than just AT&T customers in short order; this kind of customization is really the primary appeal of the Moto X.

I landed on Turquoise on the back, Black on the front, and Metallic Orange accents. And I'll be honest: I haven't bought the phone yet. I just can't decide. But I'll defeat you yet, Moto Maker. 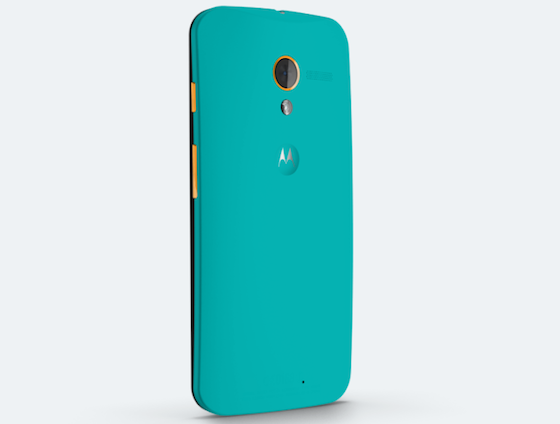