Why do these companies love to hate each other?

The gloves are off: Microsoft and Google find themselves battling in more product areas than ever while fighting a very public war of words. The latest spat has led Google to block a Microsoft-developed YouTube app for Windows Phone, despite a promise to collaborate between the two companies. In the past, Microsoft has launched public campaigns directly against Google: there's Gmail man, newspaper ads, Scroogled, and even an anti-Google Apps "Googlighting" campaign. Google's moves are less public, with curiously timed product changes, methods intended to block Windows Phone users, and the occasional sniping comment from Larry Page or Eric Schmidt. Behind closed doors, both companies are forced to work together for the benefit of their mutual customers. What's really going on, though? Why doesn't Google want a Windows Phone YouTube app? We've spoken to sources at Microsoft and Google to find out.

The most recent issue began over two years ago when Microsoft alleged that Google was preventing it from "offering consumers a fully featured YouTube app for the Windows Phone." At the time, Microsoft shipped a YouTube app for Windows Phone that simply redirected users to the mobile version of the service. Microsoft wanted more. Earlier this year the company voiced similar concerns, but in May it decided to do something about it, releasing a full YouTube app for Windows Phone with functionality that rivaled the official apps on Android and iOS. There was a slight problem, though: Microsoft had reverse-engineered Google's YouTube APIs and created an app that lacked ads and allowed users to download videos for offline viewing.

Microsoft has been poking the Google bear

Google wasn't happy with the app — it specifically cited the ability to download video, the lack of ads, and playback of restricted video — and requested that Microsoft remove the app by May 22nd. Microsoft responded, noting it was "more than happy to include advertising," but that it needed access to the necessary APIs in order to do so. Instead of pulling the application like Google requested, Microsoft pushed out an update on the very day Google demanded it be removed, nixing the download option but not addressing the lack of ads. Microsoft was poking the bear, and it knew it. Days later, the pair released a joint statement promising an updated YouTube app with ads, and compliance with YouTube’s API terms of service. From the outside, the public statement made it look like the pair were working together, but behind closed doors it was a very different story.

In the past two months, Microsoft and Google have been bickering over one central issue: HTML5. The Verge has learned that Google is forcing Microsoft to build its YouTube Windows Phone app in HTML5, despite its own Android and iOS versions using superior native code. Although Microsoft has offered to build ad support along with making other tweaks as Google has requested, a full HTML5 app isn't currently possible on the platform.

The reasons are mixed. Sources at Microsoft tell us that Windows Phone has some browser control limitations within apps, and that they'll be addressed in a future version of Windows Phone. "There is also an inherent behavior of Windows Phone where playback of an HTML5 video through a web page opens the built-in media player to host the video," says Michael Choeung, a developer of third-party YouTube app MetroTube. The restrictions make it difficult for Microsoft, and others, to control video playback and overlay controls on YouTube videos. 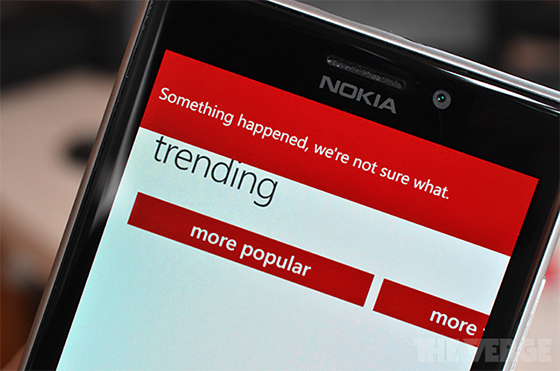 Microsoft calls Google's request for an HTML5 app "odd" but the reasoning is unclear, as Google has declined to comment. In a statement, the company says: "We value our broad developer community and therefore ask everyone to adhere to the same guidelines." These guidelines are designed to promote the public HTML5 APIs that Google provides, but if the APIs are sufficient then why aren't more developers using them widely on iOS? "I use an undocumented API as the HTML5 API is having some drawbacks," explains Muhammad Bassio, the developer of third-party YouTube iOS app Tuber. Bassio claims YouTube's HTML5 API isn't popular with other third-party iOS developers. "The ones I know don't seem to use the HTML5 API, as they play the videos natively in a custom player," says Bassio, citing Jasmine, McTube, ProTuber, TubePlayer, and YouVids as all using workarounds.

We also understand that Google wanted full approval rights on Microsoft's YouTube app, a reasonable request given it owns the brand and wants to manage the way customers experience YouTube. Instead of waiting for Google's approval, Microsoft sent Google an updated app with ad support and immediately published the new application to the Windows Phone Store, poking the bear once again. Google responded by revoking an essential API key that Microsoft was using, blocking access to YouTube from the app. It seems that Microsoft made the bet that Google wouldn't want the bad publicity involved with pulling the API key. It lost that bet.

Sources at Google tell us that the company isn't happy with the way Microsoft has implemented YouTube ads, as there's no guarantee the correct ads will be served and tracked correctly. However, insiders at Microsoft tell us that Google has refused to assist Microsoft in implementing ads in the correct way, instead insisting that it uses the HTML5 APIs it knows Microsoft is unable to use right now. Google appears to be forcing Microsoft into a tricky situation; but it is one that Microsoft brought upon itself by teasing its users with a YouTube app that wasn't approved in the first place.

What happens next isn't clear. Google's initial public statements claimed the pair would work together to "update the new YouTube for Windows Phone app to enable compliance with YouTube’s API terms of service, including enabling ads, in the coming weeks." It didn't mention a specific HTML5 requirement, or that Microsoft would be forced to rebuild the app in a matter of weeks instead of updating the existing app. Google has previously stated it has "no plans to build out Windows apps," noting that it invests where its users are and that "they are not on Windows Phone or Windows 8." If that changes then Google says it would invest, but right now it seems like Google doesn't want a YouTube Windows Phone app at all, whether it builds it or not.

It's time for these kids to grow up

Looking at the pattern of oddly timed efforts by Google to block access to its services from Windows Phone devices, it's clear the search giant isn't concerned about the relatively small number of mutual customers it shares with Microsoft on Windows Phone. At the same time it has every right to control, manage, and protect its own brands and services in the same way Microsoft does, providing it's not anti-competitive.

While Microsoft has been poking the bear and attempting to gain as much publicity as it can, Google appears to be making big demands behind closed doors before it reverses course and saves the day publicly. In reality, both companies are acting like children, and while the fight drags on, customers lose out.

More from this stream Scroogled: the Microsoft attack ads that treat Google like a political opponent