Sony's new "lens cameras," wireless accessories that clip onto your smartphone and turn it into a high-quality point-and-shoot camera, have been detailed again, this time through a leaked manual. Sony Alpha Rumors (SAR) has previously leaked photos of the devices, and is back now with a lot more detail. Diagrams taken from the manual show that the lens cameras won't leave all the controls down to the smartphone they're attached to. Both lenses detailed in the menu feature power switches, microphone, shutter keys, and power zoom, as well as a small display panel that shows vital information like battery levels and SD card status. The models will also have tripod mounts and a "multifunction jack." 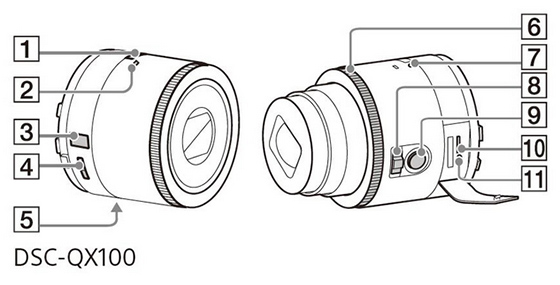 The more expensive model has a manual focusing ring

As previously detailed, there'll be a pair of the devices at launch, but SAR now says they'll be known as the QX10 and QX100. The former is a lower-end model with the same sensor and lens as Sony's WX150 point-and-shoot, while the more-expensive QX100 uses the higher-end RX100m2's internals, namely a 1-inch 20.2-megapixel Exmor R sensor and an f/1.8 Carl Zeiss lens. The QX100 will feature manual ring control for focusing and weigh 179g, while the QX10 will weigh just 105g. The lenses will use your smartphone's display as a viewfinder — a feature already available to Sony's recent Wi-Fi cameras — and will be compatible with Android and iOS devices. Both the QX10 and QX100 are expected to be announced at an event on September 4th, where we'll hopefully find out perhaps the most important detail about the lenses: their price.