Share All sharing options for: A look back at GE's decade-spanning search for a man-powered robot suit

In 1959, Robert Heinlein gave the world exoskeleton-clad soldiers in Starship Troopers. The idea of an augmented worker or supersoldier, though, wasn't limited to fiction. A year before Starship Troopers was published, GE engineer Albert Mosher had unveiled the first of a series of prototypes he hoped would marry the dexterity of humans with the power of machines. Called Handyman, it consisted of two parts: a pair of claw-tipped robotic arms and a corresponding pair of handles that reached over the shoulders of a human operator. When the operator moved his arms, the robot would follow suit — pictures at the excellent Cybernetic Zoo repository show it rolling a hula hoop or swinging a hammer.

The Handyman was only the first of several experiments, partly funded by the US military. In the 1960s, Mosher adapted the idea behind the Handyman into the Hardiman seen above, attempting to give an ordinary man "the strength of a giant." One of the few full-body Hardiman pictures shows an incredible (if impractical) piece of industrial design, with the Handyman's crablike claws completely encasing the operator's hands. GE says the suit was meant to let the user lift up to 1,500 pounds, but it weighed 1,500 pounds as well and required an umbilical connection to a power supply. Unfortunately, it also apparently worked only at a rudimentary level, despite a concept drawing that showed it helping load cargo into a plane.

While GE has variously described the suit as a real-life version of Tony Stark's Iron Man suit or Matt Damon's exoskeleton in Elysium, a slightly different theme runs through much of the projects' documentation. At a time when robotics and AI development was still primitive, GE was exploring a cybernetic "'intimate marriage' of man and machine," in which the mind of a human would help guide the power of an otherwise dumb piece of technology. The 1966 GE publicity reel above insists that "the machine is not a mindless robot operated by remote control instruments. It is an augmented man."

While the robotic suit certainly fits the definition of an augmented man, GE was also working on a project that we'd identify more with the Mondo Spider vehicle or the autonomous BigDog robot. Described as a "four-legged walking machine," it was in fact designed for the exact same purpose as BigDog: the military wanted a vehicle that could navigate rough terrain. At the time, though, GE worried that if it was operated by a computer program, "the cost would not only be prohibitive but extreme limitations would be put on the machine's range of operational achievement."

Now, AI development is becoming less of a problem every day, but the military hasn't stopped its search for ways to augment soldiers' strength. And GE's original ideas aren't dead: the HAL exoskeleton works on the same basic principles as the Hardiman, and the force feedback system used in the suits was incorporated into later GE projects in the 1970s. 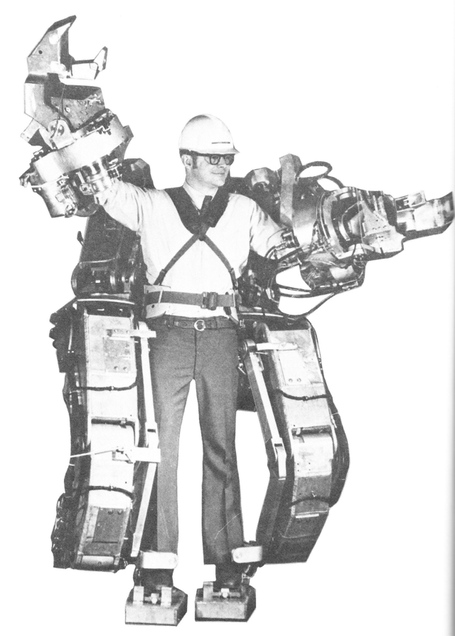