Instead of bad guys, Hinge wants to help you find dates

If you Google "John Kleint," you won’t come up with much. This time last year, Kleint was working for a military defense contractor that he won’t name. "Big data analytics," he calls the job. "Projects involved analyzing a large social graph of people, organizations, and locations that were important to find meaningful connections," he says. Imagine the agent crunching numbers and tracing reports in Zero Dark Thirty.

Today, Kleint analyzes a very different kind of "meaningful connection" as the "chief matchmaker" at Hinge, a mobile dating app. Hinge is a lot like Tinder, a popular hookup app that only reveals potential matches once both people show interest, except it only surfaces matches that are friends of friends. Given that Hinge pulls from a smaller pool of potential matches than other dating apps, making smart recommendations based on good data is key, an idea which captivated a restless Kleint. "In defense, you’re looking for the bad guys, or following money and influence," he says. "It turns out that a lot of the graph processing work is pretty similar in dating." 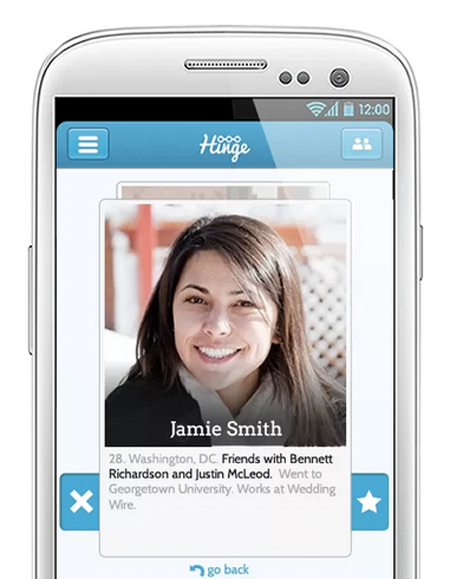 When Kleint first started working at Hinge, in a DC office not far from his old defense gig, the first challenge was understanding his new data set — tens of thousands of completely harmless Facebook users. On a good day at his old job, nobody got hurt, and now, a good day is when Hinge receives an email from two soul mates who found each other using the service. Hinge doesn’t ask the usual array of questions like "Do you believe in God?" from its users, and instead relies on pre-existing signals to make assumptions about you. Solely by examining your friends and interests, the service can predict your political leaning, your age, your sexual orientation, and your race. Kleint works on the algorithms and machine learning techniques to make it all work.

"There are certain factors that go into a stable long-term relationship, and you can infer some of those factors from your friends," he says. "There’s no explicit equation. There’s no guessing that likes should have 20 percent weight and attraction should be 30 percent." Picking matches is especially hard since different people have different tastes. Hinge takes the opposite approach to some dating sites like OkCupid with overt "hot or not" meters and percentage odds of being a a match. And unlike dating services that simply pair you with somebody who’s also obsessed with Jay and Silent Bob Strike Back, Hinge uses that data to learn other things about you. Kleint won’t expose Hinge’s secret sauce, but points to a study by researchers at Cambridge University who created an algorithm that correctly predicts male sexuality 88 percent of the time, and is 95 percent accurate at distinguishing between African Americans and Caucasian Americans, without ever having seen a photo.

"One of our problems is computing attractiveness."

When Kleint first drew up a histogram for all Hinge users and the number of potential matches for each, he expected a normal statistical distribution, but what he saw looked like a chart spit out by an EKG machine monitoring your heart. "There was no pattern to it," says Kleint, who was expecting to see some people with 1,000 matches and some with just a few. Instead, he found that there do seem to be "a lot of fish in the sea" for any given person, since we all have different tastes.

"One of our problems is computing attractiveness," says Kleint. "How might we estimate the attractiveness of a particular user, and how can we use that to provide better matches?" Foursquare weighs the likes of Japanese food connoisseurs higher when computing its 10-point restaurant scale for ramen places, and Hinge is no different. The service needs to take into account that some people are or aren’t attracted to members of a certain ethnic group, says CEO Justin McLeod. Hinge’s algorithms organize people into sub-pools based on these kinds of characteristics to make better recommendations, but like Netflix, the service sometimes throws in a wild card based on the tastes of people similar to you. The service is very much a learning machine modeled after Amazon and Netflix, "the big boys" of data-driven recommendations, as Kleint calls them. 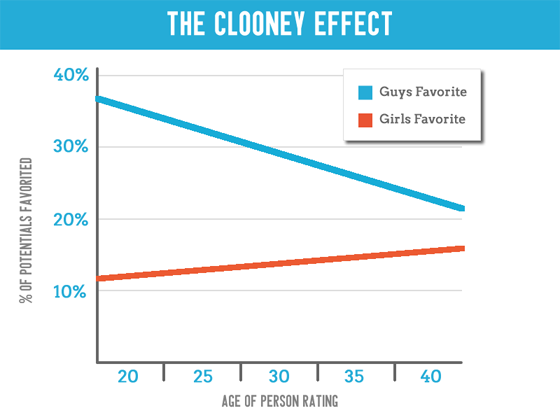 Like with his previous job, half the battle is realizing that not everything is what it seems. At his last position, Kleint sleuthed through investments in government defense suppliers to see if there were any undue or shadowy investors. "You want to follow the flow of influence through a social graph and find the non-obvious relationships, and connect the dots," says Kleint. He uses apps like InfoViz to visualize the wall of Facebook data and spot patterns. One such pattern is what Hinge has called The Clooney Effect: as women get older, they become less selective (or perhaps more attracted to "a touch of gray?"), but as men get older, they become more selective.

The Clooney Effect: as women get older, they become less selective

Setting aside content, Kleint has enjoyed the degree of flexibility that a startup entails. Hinge runs on databases housed on Amazon servers — a far cry from government servers locked in a bunker. At his old job, all software and hardware was built in-house on a closed network, disconnected from the internet. Bringing in external software wasn’t really an option. At Hinge, it’s just a matter of pitching a new tool to the leadership.

With Kleint’s help, Hinge could help you look for and find the love of your life. But don’t bother looking for Kleint. In a world when everyone has some dirt on Google, there’s hardly any evidence he exists aside from some Python tutorials and a couple research papers he co-authored in college. On AngelList, a popular website for learning more about startups, Kleint is listed beneath his Hinge colleagues, but without a picture, and with the word "Unconfirmed" below his name — and that’s the way he likes it. "I can neither confirm nor deny holding research positions at various three-letter agencies," says Kleint, "but the CIA cafeteria definitely has the best food."

John Kleint declined to be photographed for this article.