Printer concept trades your bulky inkjet for a Stack of paper

Share All sharing options for: Printer concept trades your bulky inkjet for a Stack of paper

Few people have set out to reinvent desktop printers (at least in ways that don't involve shrinking them). But Mugi Yamamoto has a fresh take on how the office mainstays should work; he's trading the bulk of conventional units for a compact device that sits atop a pile of paper and "eats" its way down. The Stack, created by Yamamoto as a university diploma project, swallows pages beneath it and forms a new heap of paper with your printed jobs on top. Yamamoto says the design allows a "very light appearance" that's downright tiny compared to traditional printers from the likes of HP, Canon, and Epson.

That minuscule footprint is possible because Yamamoto has managed to forgo the paper tray, which he says is the bulkiest component of printers. It also makes reloading less of a chore; the frequency of paper refills will vary based on how high you're willing to stack a mountain of paper. Granted, you'll need to find a way of keeping those piles orderly, but that won't be a practical concern for some time: the Stack currently remains in prototype stage. Yamamoto tells Wired he's already built a functioning demo model, but is seeking out ideas for improvement from fellow engineers. "To sell Stack as a mass product, some more development and refinement needs to be done," he says. 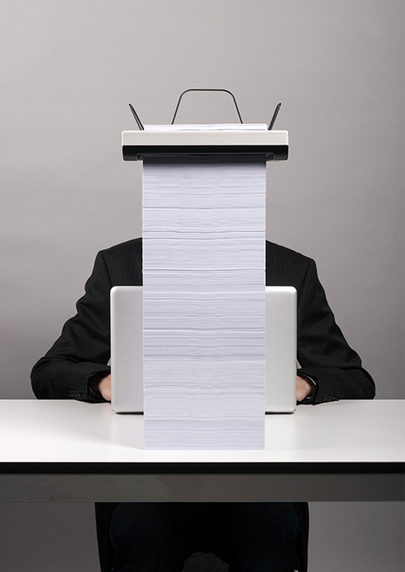