Spec Sheet: BlackBerry meekly returns to BB7 with the 9720

Spec Sheet: BlackBerry meekly returns to BB7 with the 9720

Earlier this week, BlackBerry announced a new keyboard-equipped smartphone built in its tried-and-true rounded rectangular shape — but the new phone isn't running BlackBerry 10. The new BlackBerry 9720 is actually running the company’s previous operating system, BlackBerry 7. With BlackBerry already struggling to make a dent in the market, it’s easy to question why the company would bother to put effort into a low-end device running outdated software. But the short answer is that for BlackBerry, low-end devices still matter in a major way. 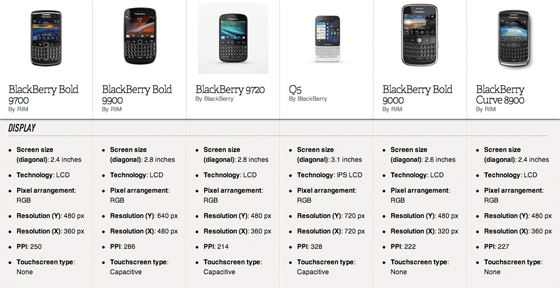 BB7 is sticking around for now

That the company is continuing to developing BB7 devices actually isn't a surprise: this time last year, BlackBerry CEO Thorsten Heins said that it wouldn't be giving up on its old OS until a "full portfolio" of BB10 smartphones was available. While BlackBerry is quickly moving toward that goal, Heins also remarked that BB7 phones have remained strong in emerging markets, where low-cost devices are succeeding.

That’s right where BlackBerry’s new 9720 fits in. Depending on how you look at it, it’s either a low-end version of one of the last BB7 flagships to grace stores, 2011's Bold 9900, or a higher-end version of 2009’s Bold 9700. It has the styling of the former, the touch abilities found on both, and internal specs that fall distinctly in between. In its favor, the new 9720 has a smart and simple style, almost like a matte version of the company's 2011 flagship, and it has a keyboard more akin to what was found on its Curve line of devices, which some might prefer.

It’s not a particularly special phone in that regard, but for BlackBerry, it’s likely to mean something. Bloomberg Businessweek reports that around two-thirds of the company’s business now comes from emerging markets — right where this phone is headed. BlackBerry hasn't specified exactly where that'll be just yet — nor for what retail price — but it says the 9720 will be available in various markets within Asia, Africa, Latin America, Europe, and the Middle East sometime soon. Thanks to low cost phones, BlackBerry has reportedly remained a dominating force throughout the type of developing nations where the 9720 might be found.

Though BlackBerry has already begun to bring BB10 to these markets with the Q5, the Q5 may not be selling for quite low enough of a price. According to The Wall Street Journal, the Q5 sells for around $500 throughout Europe. While BlackBerry hasn't announced a price for the 9270 yet, if it were to set it significantly lower than the Q5’s retail cost, then there would be a distinct place for the new phone among BlackBerry's lower priced devices. With even lower-end specs than the Q5 and the Bold 9900, there's a good chance that's exactly what BlackBerry plans to do.

There were a couple other fun additions to the database this week: