Can tower defense create a new generation of locomotive lovers?

Lionel has been making and selling model trains since 1900, and recently the company decided to do something different to rejuvenate the brand — release an iPad game. Battle Train is a game where you strap guns to your locomotive in order to fight off waves of evil robo-trains that want to stop you from delivering your payload. And for the company, it's an attempt to tap into a lucrative, younger demographic. "Many parents and grandparents today know and love the brand, but we recognize that technology has significantly changed how kids today interact with toys and games," says Lionel's Tony Bordon. "We understand that in order to keep up, Lionel must evolve as well."

Lionel is a company that has had a rough decade. In 2004, a legal dispute with rival MTH Trains forced Lionel to file for Chapter 11. When the company finally emerged from bankruptcy four years later, CEO Jerry Calabrese called it "one of the most dramatic and difficult periods in Lionel's 108-year history." This involved a major company-wide restructuring — among other changes, the investor, rocker, and model train fan Neil Young was no longer a minority shareholder, though he remains on board in a consulting role. A few years later, the company has turned to video games.

"In order to keep up, Lionel must evolve."

Battle Train is sort of like a tower-defense strategy game, but one where you and your enemies are moving along a track. You can switch between tracks to avoid obstacles and smash through foes, and when an enemy is within range you simply tap on them and the gun you want to use and it will start firing automatically. When your train gets longer and more enemies appear on screen, managing everything can be a stressful experience. As you play you'll earn money, which can be used to buy new boxcars and all kinds of crazy sci-fi weapons to put on them. You can also buy a cowcatcher covered in dangerous-looking spikes and armor to better defend against robot-train attacks. There's even a story that's as ridiculous as you'd imagine, complete with a villain named Dr. DeRaille.

It's a long way from the meticulously detailed models Lionel is known for, though the trains in the game are based on actual Lionel models, seemingly in an attempt to drum up interest in the physical hobby — they just happen to have guns and spikes all over them. Some sort of mobile model train simulator might have been a more obvious step for the brand, but Battle Trains is Lionel's attempt to reach kids on their own terms. And it could just be the beginning. If Battle Train is successful, says Bordon, "Lionel is considering a more expanded modular train simulation." Calabrese, meanwhile, says that the game "marks the beginning of a larger digital initiative" for Lionel. 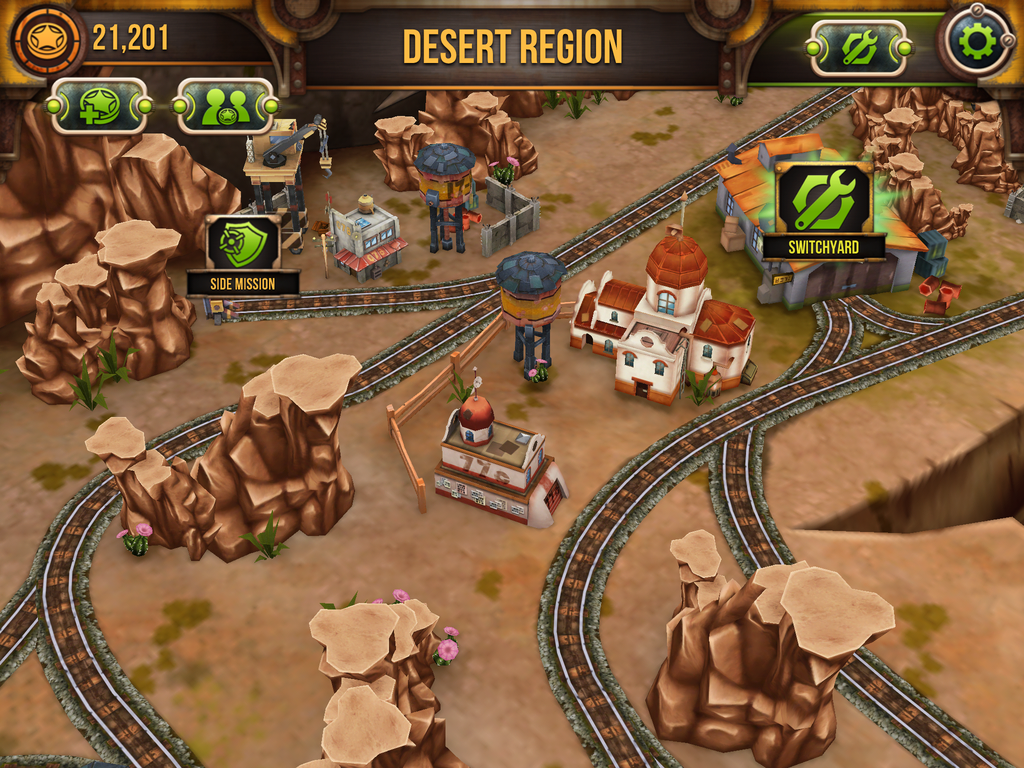 Build a train loaded to the brim with weaponry

Luckily, despite its odd premise, Battle Train is a pretty solid tablet diversion. You'll want to ignore the goofy story and plentiful train puns, but the core gameplay is fun and there are numerous upgrades to mess around with. There's something very satisfying about building up a train loaded to the brim with weaponry. It even employs a free-to-play structure that, much like the recently launched Plants vs. Zombies 2, doesn't really force you to spend real money. Of course, just because kids find the game fun doesn't mean they'll be converted into model train fans. And if they are, they might be disappointed to learn that a real General 440 can't actually shoot laser beams.