It’s not hard to send your friends a vacation postcard from Saturn — even if you never actually visit. All it takes is a visit to the Intergalactic Travel Bureau, a combination of science classroom and performance art project that briefly popped up in New York. For two weeks in July, you could step inside an unassuming office near Times Square and plot a vacation as near as Mars or as far as a distant galaxy, all with the glamour of a ‘60s Pan-Am magazine spread.

The Intergalactic Travel Bureau debuted at the British Royal Observatory in 2011, but it’s now made two stops in New York, the first at Government Island’s Figment art festival in 2012. Outside the repurposed storefront, producer Olivia Koski and documentary artist Kaitlin Prest, two "travel agents to the stars" clad in minidresses and multicolored scarves, take turns drawing in customers. In the back of the room, astrophysicist Hanno Rein sits at a desk behind both a typewriter and a MacBook Pro. Stacks of postcards litter the office for visitors to fill out and send to friends and family. 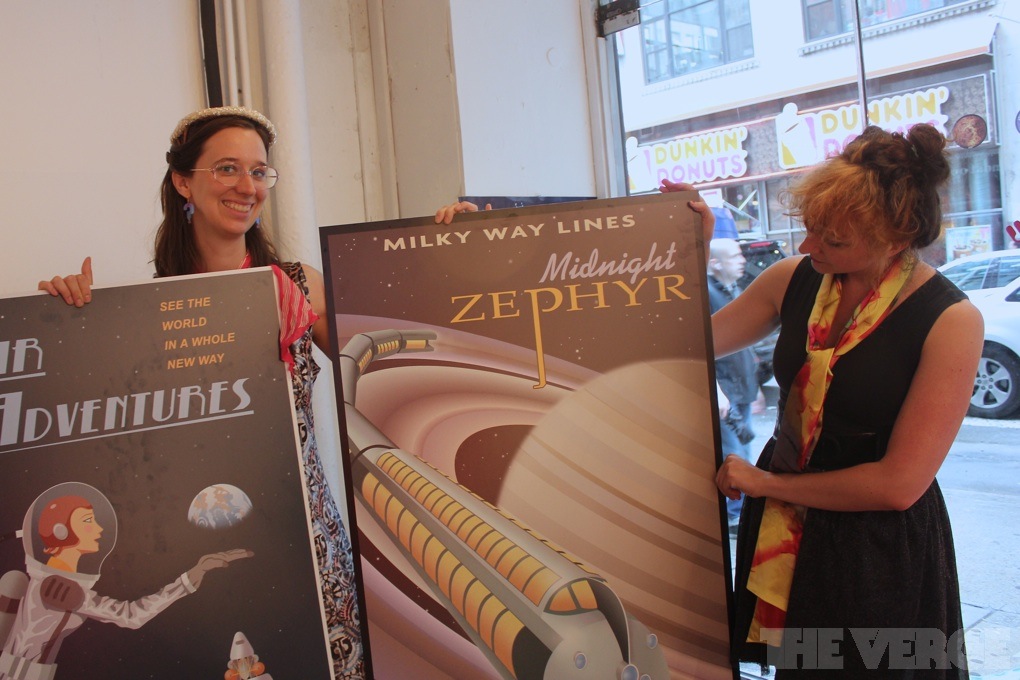 As the agents show you illustrated ads for the different planets — Venus is tropical, Pluto has great winter sports — Rein pulls up a vast space map controlled by the Leap Motion, twisting his hand to pull up an array of information about your choice. He designed the program himself, scraping data from the Kepler missions, but the real draw is hearing about how you’d actually plan a vacation. Ask about a planet, and you'll hear about its composition, how much a mission costs, and how long the trip is. If the journey there and back is more than a lifetime, you'll probably only need a one way ticket.

"There’s a nostalgia for the past when people were dreaming of the future."

The Intergalactic Travel Bureau harks back to an earlier era where traveling into the exosphere was a gauzy dream, complete with attentive stewardesses and catchy slogans. But space tourism, as evidenced by both real programs like Virgin Galactic and aspirational plans for cheap lunar missions, is already a feasible reality, if you have the cash to finance it. Koski admits this has actually made things a little more complicated. "When we first did it, it was just ‘Oh yeah, we’re going to space!’ Everyone knows that we’re not really going, but we’re going to learn about space science." Virgin Galactic still existed then, she says, but private travel is increasingly coming into the public eye. That means Intergalactic's agents have to know all the details. "We’re going, ‘Ok, I need to make sure I know what all our options are, because maybe people have heard about Mars One.'"

When I came to visit, the Intergalactic Travel Bureau was having a little trouble drawing customers: unlike people who come to a science expo, Times Square pedestrians are used to being harassed by nonprofit volunteers and costumed salespeople. "I’m like, please! Space vacation planning! You want to go to outer space? And they’re just like ‘No’," says Koski. Then they do a double take — and sometimes reconsider. "Some people really dive in," she says.

I got to see one group plan a vacation, a couple that disdained the "boring" world of Mars for somewhere as far away as they can get. After being offered a trip to some distant exoplanet found by Kepler, they asked how much it cost: several billion dollars. "Oh," one of the men said in mock disappointment. "I don’t have that kind of money." They filled out some postcards anyways. 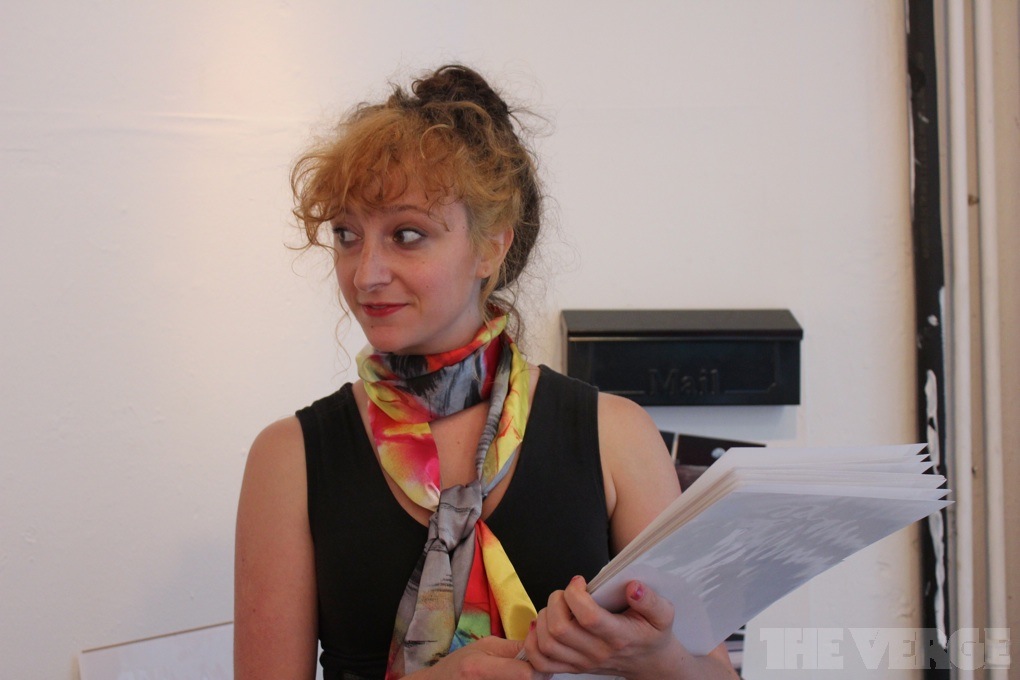 While the Intergalactic Travel Bureau is all about the democratization of space science, its members have mixed feelings about the explosion of crowdfunded space projects. "They seem like a gimmick," Koski says — and she’s dubious that the money some of them raise will go toward anything that legitimately helps the scientific community. Rein, who works at Princeton’s Institute for Advanced Study, worries that space crowdfunding could accidentally signal that scientists don’t need traditional grants. "We shouldn’t let scientific projects be judged like a popularity contest," he says.

The spacebound future is nearer now than ever, but like the Intergalactic Travel Bureau, part of us is still looking at it with borrowed optimism from a bygone era. "I think there’s a nostalgia for the past when people were dreaming of the future," says Koski. "It’s this fantasy of travel — the way you travel as well … I think it was a different time, too. I think we’ve lost that excitement as a society." But she thinks that could be changing, with companies like SpaceX getting real results. And any science can delight and fascinate, but there’s a particular allure to exploring distant planets. Koski sums it up more succinctly: "I think space is just cool." 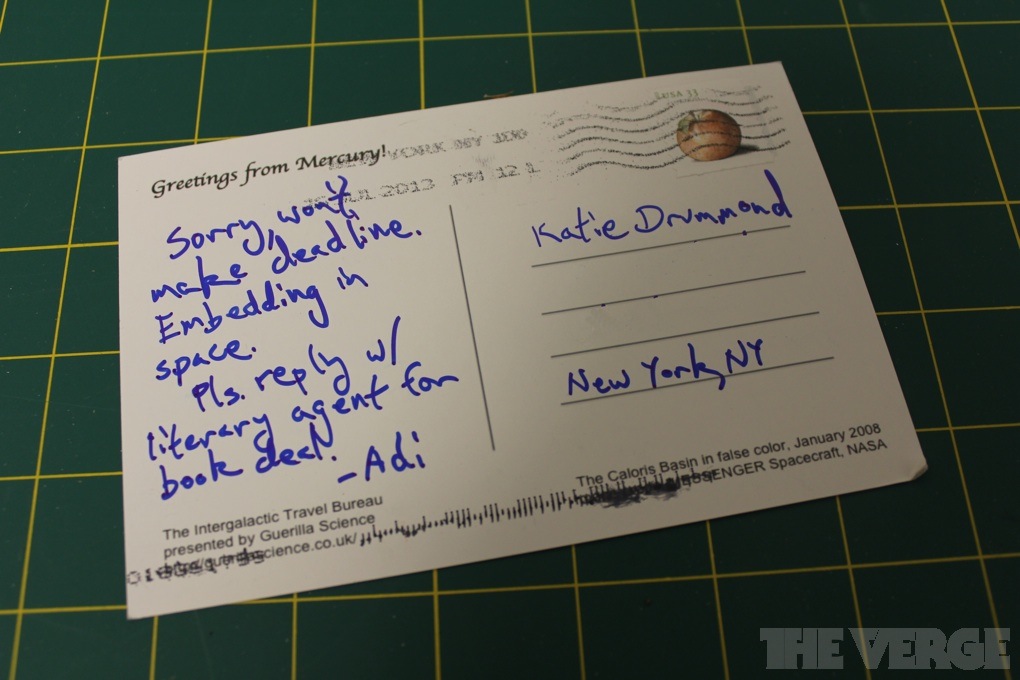