The Moto X has finally been revealed and although it’s the first phone that truly reflects the new company’s post-Google philosophies, it’s thoroughly a Motorola phone, not a Google phone. It’s not running the latest version of Android, it’s being sold in partnership with the carriers, and it’s priced like a traditional smartphone instead of as a low-cost Nexus. It could be disruptive, but it’s more likely to stake out a middle road. Motorola insists that it’s just another phone maker to Google.

Now that we know what the Moto X is — and more importantly what it isn’t — we can say pretty definitively that for the time being, the job of pushing Android forward falls to the same people it always has: Google’s Android team and the Nexus program. Both are paradoxical and always have been. Android is open source and despite Google’s best efforts, fragmented at both the device and software level. The Nexus program has always seemed more like a vanity project for diehard Android fans than a genuine attempt at dominating the smartphone market.

Android is fragmented and Nexus devices have limited appeal

Can Google solve either of those problems? Does it even want to? Luckily, Google just released a new version of Android and a new Nexus 7 tablet — so we took the opportunity to sit down with Android director of engineering Dave Burke and vice president of Android product management Hugo Barra to see if the answers to those questions have changed. Here’s the short version: yes, but not how you might expect.

If you're the sort of person who gets worked up about Android fragmentation, the just-announced Android 4.3 update is a good news / bad news kind of release. The bad news is that there's no end in sight for the cycle of Android updates, which goes a little something like this: Google announces and releases a new version of Android, Nexus devices are updated over the course of a month or so, and every other phone manufacturer on the market makes vague promises of updates that inevitably feel like they're delayed by custom software and carriers.

It remains to be seen if Google Play edition phones or the Moto X can change that cycle — but even if they do, it will only solve the problem for a tiny fraction of Android users. 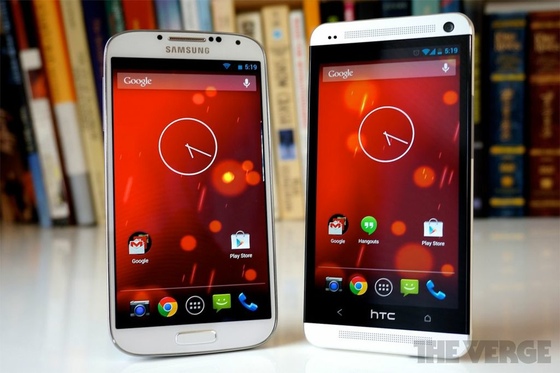 Android 4.3 is a very minor update

With Android 4.3, the "good" news, such as it is, is that it isn't what most would consider an essential update. The features 4.3 adds to the operating system are mostly under the hood: Bluetooth Smart, improved multi-user profiles, and slightly better gaming support top the list. As a "point" platform update, it's not unexpected and presumably an upcoming 5.0 / "Key Lime Pie" update will do a better job of wowing users with new features.

But while Google doesn't have a big platform update now and can't seem to get software updates distributed to the Android ecosystem in a timely manner, it has found a way to push new features out to Android users. The method is simple: Google has "modularized" the Android platform so it can release the best parts — its apps — on their own schedule, irrespective of major platform updates. "We're not tied to a platform release for apps unlike some companies," Burke says, "we're constantly updating all our apps in parallel."

Google has "modularized" the Android platform

Burke points out that Google's Android apps — including Hangouts, Keep, Google Music, Chrome, Drive, Gmail, YouTube, and more — are updated on a more aggressive schedule and "no longer have to wait for major platform updates." How often each app is updated can vary, but "six to eight weeks is pretty typical," Burke tells us.

There are upsides and downsides to this strategy. Android itself becomes more of a "platform," needing updates mainly so that it can support new app features and functionality. That doesn't necessarily make life easier for developers — who still need to decide which release to target — but it does make life better for users. Google misses out on the attention it would have gotten from the giant, update everything kind of release we see with iOS, but it reduces the pain of not being on the latest version. For people who still can't handle that pain, there's the Nexus program and the new "Google Play edition" devices.

Nexus devices have always been a bit of a mystery

Nexus devices from Google have always been a bit of a mystery. When the company started the program, it looked like Google's plan to sell devices directly could actually cause some real disruption in the wireless space. But mobile is filled with entrenched and powerful players, so Nexus phones didn't have a big retail impact.

What are Google's Nexus devices for if not to be purchased by large numbers of consumers? Google's take on that issue has been consistent: they're "halo" devices meant to educate the rest of the ecosystem. Burke put it to us this way: "Basically what Nexus allows us to do is set the standard ... [we can] demonstrate how Android runs and hopefully influence other device manufacturers to take what we've done and do even better."

That explanation has often been difficult to take at face value. Though the phones have usually been elegant devices, they typically launched with specs that were behind the curve. The Galaxy Nexus had a pretty terrible camera, for example, and the Nexus 4 lacks support for LTE. Now that Google sells top-end "Google Play edition" phones that run stock Android, the Nexus line seems more irrelevant than ever.

That brings us to the other — and more important — reason the Nexus line exists: Google simply needs hardware on which it can develop Android. Burke says "as an engineering team creating a mobile platform — we can't do that in the abstract. We need to do it on a real device that we're carrying with us." When people ask me about the Nexus line, I like to joke that if you need to create a few hundred polished and usable devices for Google engineers, why not make a few hundred thousand more and sell them to hardcore users?

But with Google Play edition phones running stock Android, does the company really need to be in the business of making hardware for a tiny audience of power users? The argument that it doesn't may have become moot in the past year, thanks to the release of the original Nexus 7. Google says it accounts for ten percent of the rapidly growing Android tablet market and, indeed, recent studies show that it is among the top 20 Android devices worldwide. It was the first Nexus device that struck upon a simple, winning formula: make a good product and sell it as cheaply as possible. Later, the Nexus 4 would also retail for surprisingly little and has done better than its predecessors — but still hasn't sold as many units as the Nexus 7. 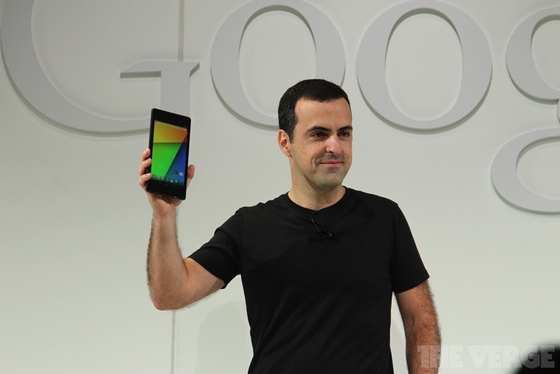 Hugo Barra tells us that the Nexus 7 achieved these sales in the face of aggressive competition from other Android tablets and, of course, the iPad. It also achieved Google's goal of using a Nexus device to improve Android itself. "We learned a ton from it," Barra says, and the improvements in Android 4.3 are largely designed to appeal to tablet users. "It really helped us think about what we needed to put in the new generation tablet."

The Nexus 4 appears to be more popular than most people give it credit for, and the Nexus 7 is the most popular Android tablet. Even if you don’t buy into Google’s "halo" argument, the company now has two good reasons to keep the Nexus program going: developing Android and actually selling devices — though whether or not the company makes a profit at it is totally unclear.

There’s no cure for Android fragmentation, but Google can manage the symptoms

There's no getting around the fact that Android fragmentation at the platform level is real and a real problem for Google — even if it's only because it opens the company up to shots from Apple CEO Tim Cook. If you think Android fragmentation is a disease, over the last five years you’ve seen Google try and fail to come up with a cure. Luckily, it’s not a terminal disease, and in the past year the combination of unbundled app updates and successful Nexus devices have helped to manage its symptoms. Google, and Android users, are just going to have to live with that.