A French artist has built a seven-foot-tall humanoid sculpture from A4 paper. To construct the figure, named Titan, Thomas Voillaume first created a model using 3D software, before printing out the necessary pieces onto 145 sheets of A4 paper. The paper was treated with resin to increase its strength, while the figure was filled with expanding foam to help it stand upright. Voillaume then grouted and sanded the sculpture, applying comic book art to act as Titan's skin.

Voillaume describes the resulting sculpture as an "inverted avatar;" a "digital entity materialized in our world, the fruit of our collective imagination." He believes it's a physical representation of our superhero fantasies: Titan's angular face is modeled on radio signals, implying the intangible, while the comic-book skin represents our hopes and dreams. "The stories of great heroes blend and blur, revealing the reins of our contemporary mythology." 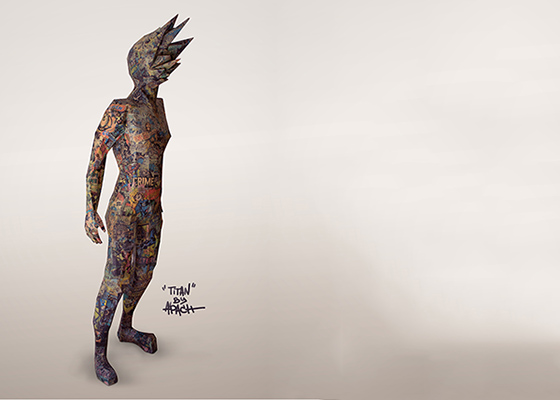