Microsoft has submitted a patent for a "head-mounted display" that looks a lot like the company's leaked Kinect Glasses. The patent application was filed in early 2012, and made public this week. Microsoft describes a multiplayer system that lets game players invite other users via a head-mounted display device. Illustrations attached to the patent show a pair of glasses that include sensors to locate users, track gestures, and read the environment of a game player. 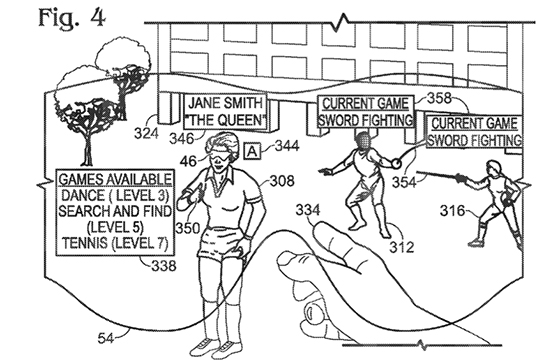 Several Microsoft employees are listed on the patent application, including two that work in the Xbox division. Prior to Microsoft's Xbox One unveiling, an "Xbox 720" document leaked in June last year that included references to a Kinect Glasses device (Project Fortaleza). The glasses appeared to be Wi-Fi- or 4G-enabled and incorporated augmented reality in a similar way to Google Glass. A roadmap suggested the glasses would be made available in 2014 following the launch of the Xbox One. Microsoft submits hundreds of patent applications every month, and its research teams are exploring a "no touch" future of wearable devices, but it's not clear if the company is actively developing any eyewear like Google Glass.

The Verge has reached out to Microsoft for comment on its glasses plans, and we'll update you accordingly.

Update: A Microsoft spokesperson says the company regularly applies for patents. "Not all patents applied for or received will be incorporated into a Microsoft product."