It’s pretty easy to see what the theme of the year is when it comes to mirrorless cameras: two-tone, throwback looks built into a slim package. Panasonic has just stepped into the arena with a retro camera of its own, the Lumix GX7. It’s the successor to Panasonic’s well received GX1 — and while it has a smaller sensor than some of the best competition out there, it also has a lot worth liking. Here’s how it stands up to some of this year's most stylish and powerful cameras. 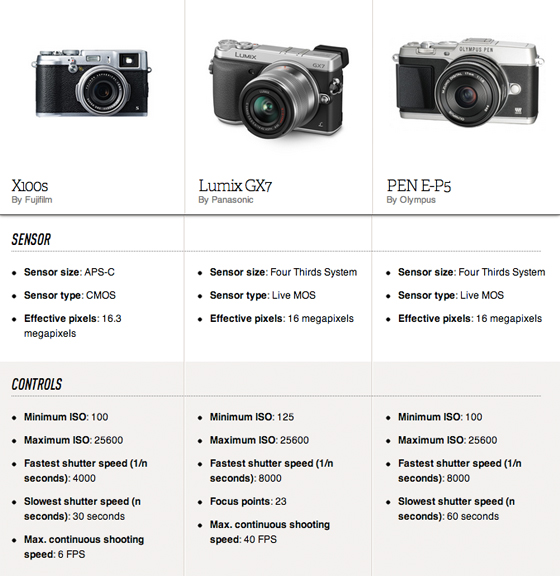 Panasonic’s latest will be directly competing with Olympus’ small and sleek PEN E-P5. Both are Micro Four Thirds cameras sold for $999.99 body only, but the GX7 comes with the major advantage of a built-in electronic viewfinder (EVF). While there are plenty of great cameras that only allow users to frame their shots through a rear display, using some type of viewfinder can allow for better visibility in bright lighting and better stability when shooting. Olympus does sell an external EVF — which is a little bulky but absolutely gorgeous to look through — but it’ll run about $279.99 extra.

For about $300 more than either of those cameras, there’s Fujifilm’s incredibly charming X100S. It has some of the best looks of the bunch, though it’s just slightly bigger and heavier. That’s for a good reason though: you’ll get a much larger, APS-C format sensor, which should be able to capture more light and create a shallower depth of field than either of the Micro Four Thirds cameras' sensors could. It also has a built-in EVF that can even flip down to reveal a slightly offset traditional viewfinder.

But the GX7 and E-P5 have two big bonuses over the X100S. For one, they both include in-body image stabilization, which should let photographers capture sharper images during situations such as shooting in dim light or through a telephoto lens. The X100S doesn’t have built-in stabilization, but it also might not need it quite as much because of its compact, wide-angle lens.

That lens, however, is arguably what gives the others cameras another advantage: both Micro Four Thirds cameras have a wide range of lenses to select and swap between, while the X100S has a single, fixed lens to work with. That said, the GX7’s 14-42mm kit lens isn’t much to marvel at, reaching a minimum aperture of only 3.5 at its widest level of zoom. If you end up picking up the GX7, you’ll likely want to look through the Micro Four Thirds ecosystem for something that better suits your shooting style. 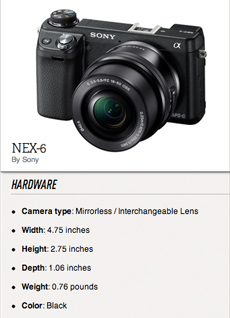 The X100S is certainly a fun camera to shoot with, but for photographers looking for a tiny camera that offers more creative flexibility, the GX7 could just win out — if it can take some great pictures. And with its built-in EVF, it should have the edge on Olympus’ E-P5 as well.

Of course, if you’re not focused so heavily on a vintage look, the field changes quite a bit. Sony’s NEX-6 looks good, takes great photos, and is available body-only for $749.99 or bundled with a lens for $899.99. Its lens selection is limited, but it also includes an APS-C sensor, which — as on the X100S — is bound to capture better photos than a smaller Micro Four Thirds sensor.

While the GX7’s predecessor had a slew of fans, it was also fighting against cameras at a much lower cost. At its high price, the GX7 will have its work cut out for it, but it could still be the right choice for those committed to the large Micro Four Thirds lens ecosystem.

There were a few other additions to the database this week:

If you want to learn more about any of the products mentioned above, all of our information on them can be found through the database box located beneath the article. For more on cameras, tablets, and just about every product around, you can check out the full Verge Database right here.