This is how you build a Windows 8 laptop

I'm at 38,000 feet, in seat 20B on a Delta flight from San Francisco to New York City. I’m next to a large man in a pink shirt and tortoiseshell Ray-Ban glasses, who could barely wait until 10,000 feet to reach underneath his seat and pull out his laptop. An HP laptop, black, I can't tell what model. Clunky, fat, clearly past its prime. He pulls out a mouse next to it, and after about five minutes of wrangling finally finds space for everything on his tray table.

Next to him, I reach into my bag, slide the Acer Aspire S7 out of its beige felt case, and get to work.

The S7 is straight-up made for airplanes. It's incredibly thin and light, with a hinge that opens to any angle you want and a screen that looks great from even the oddest seatback-induced angle. And with this, the $1,449 laptop's second revision, it claims enough battery life for a cross-country flight and more.

Which is a good thing, because all the outlets in my row are broken. Best of luck, Richard (I think his name was Richard). I have work to do.

I've never been so mad at stickers. I always hate the Intel and Ultrabook squares that adorn just about every Windows laptop, but here they're particularly offensive. They're the only pock marks on what is otherwise one of the most beautiful, well-crafted laptops I've ever used. From the white Gorilla Glass lid to the glittering silver magnesium alloy and aluminum chassis, this 0.51-inch-thick notebook is as attractive as it is well-crafted. 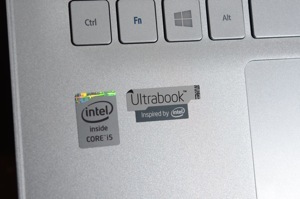 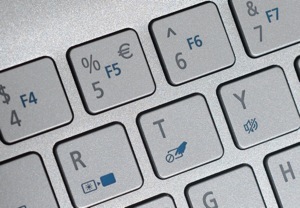 In a lot of ways, it’s better-designed than the MacBook Air. Every detail appears to have been considered, like the slight underbite of the lid that makes it easier to pry open (though at 2.87 pounds it's so light you'll need to hold it in both hands lest you pull it off your desk while you open the lid). From the glowing logo to the hinge-mounted fan that looks cool rather than simply necessary, it’s everything a laptop should be — and perhaps as importantly, nothing more.

Acer combined the function row with the number keys on the keyboard, which is a little confusing. The number, function, and F1–F12 keys are combined into two crowded rows, which meant I spent a lot of time trying to figure out how to toggle Wi-Fi on my flight (it’s on the Q key), but it's not so bad once train your pinky to find the Fn key. It also makes the keyboard five rows instead of six, and the tray appears much smaller and more refined.

The keys are big and have much more travel than on last year's model, but they're just as responsive; this is one of my favorite keyboards to type on. The backlight is still so uneven that the keys can be hard to identify in the dark — the Sony VAIO Pro had a similar problem, and it's just ugly. But even though it's not perfect, it’s great.

The trackpad, as with any Windows 8 machine, is good and bad. It's relatively smooth, a completely usable pointer, and while I can't stand that it's not centered on the palmrest it's plenty big and clicky. Even though all too often the trackpad thinks I'm selecting text when all I want to do is scroll with two fingers, it's still one of the better Windows 8 trackpads out there — just go to Settings and extend the area on the right side that acts as a scroll bar, and you'll be fine. 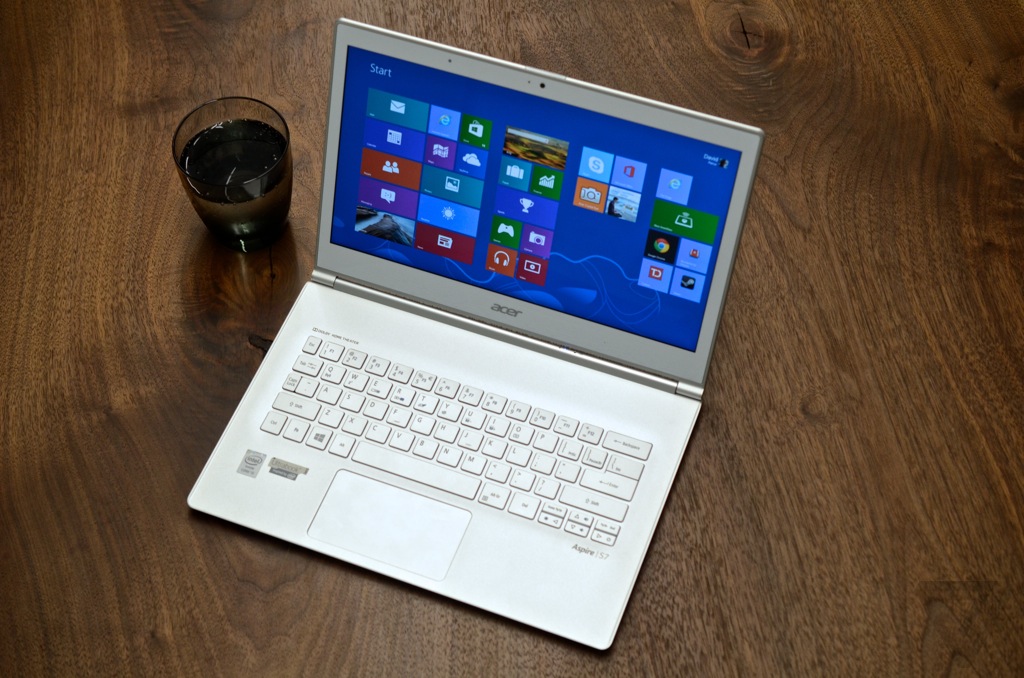 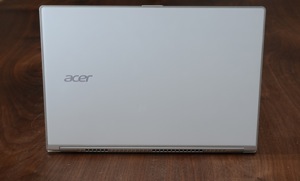 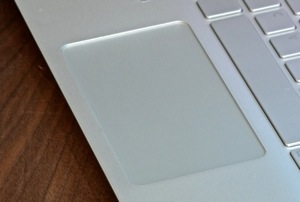 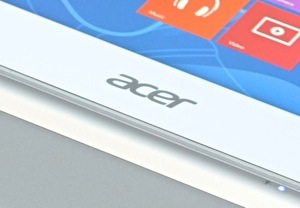 My eyes aren't nearly good enough to take full advantage of all the pixels on the 13.3-inch, 1920 x 1080 display on the S7, which makes some UI elements appear too small (especially on the desktop side, but I’m hoping Windows 8.1 solves that) but is otherwise a great display. It's bright and colorful, with wide enough viewing angles that everyone in my vicinity on that Delta flight could see exactly what I was doing.

The wide viewing angles are key, because the S7's hinge allows you to lay the screen completely flat; you could mount the S7 on a wall if you were so inclined. (I've yet to figure out an actual, practical reason to lay the screen flat, but it's at least a neat party trick.) More often, it’s just useful for propping on your lap, a table, your chest, anywhere — I couldn’t find a position where the S7 wasn’t totally usable.

The one thing I hope changes is the side-mounted power button. It’s hard to find next to the ridged edge of the base, and it’s easy to accidentally press, which meant my lap was a minefield of accidental shutdowns. My seatmate Richard also turned it off at one point as he leaned over to get something from his bag. I’d like better speakers, too — the new S7’s stereo audio gets relatively loud, but there’s almost no bass to speak of, and everything sounds tinny and compressed.

The hardware is fantastic, but it was last time too — Acer only made slight improvements over the last Aspire S7 model. Just as the MacBook Air hasn't changed much in three years, I imagine this is what the S7 will look like for the foreseeable future. But Acer did have some work to do with the S7, particularly with the device’s pathetic battery life turning it from gorgeous laptop to decorative furniture.

Compare the Aspire S7 to the MacBook Air, Kirabook, and more 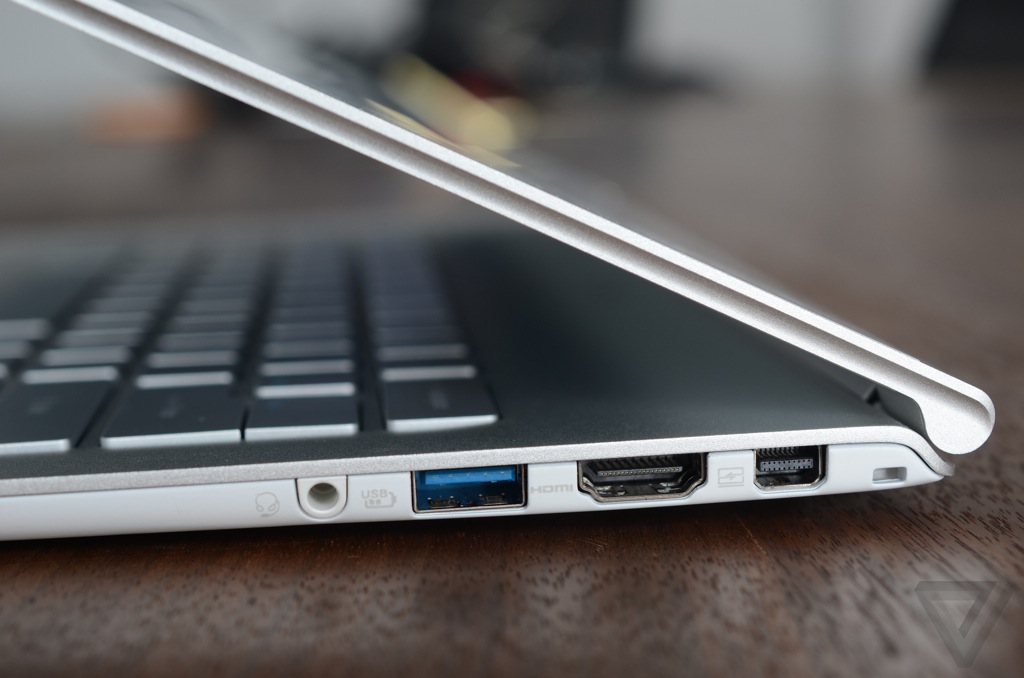 Nothing else about last year’s Aspire S7 mattered once we found it offered all of three hours, 55 minutes of battery life. That’s just not an acceptable score, but Acer’s righted its wrongs here. It shoved a much larger battery into the tiny body (6,280mAh instead of last year’s 4,680mAh) and included Intel’s new Haswell chips, which have proven their battery prowess over and over. The new Aspire clocks in at seven hours, five minutes on the Verge Battery Test, which loads high-resolution images and popular websites at 65 percent brightness. That’s barely over half what the new MacBook Air scored, but it’s well over the threshold of acceptable battery life for a Windows PC. The S7’s biggest problem: solved. 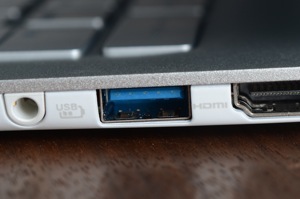 Otherwise, the S7 is mostly unchanged from the last version. I say mostly because there were a couple of strange issues I haven't encountered before: a few different apps opened with a small window surrounded by a full screen's worth of gray space, or would open slightly off-center. Closing and re-opening the app always solved the problem, but I've never encountered it on other machines.

As long as everything opened right, though, things worked well. With a 1.6GHz Core i5 Haswell processor and 8GB of RAM (mercifully upgraded from 4GB last year), along with 128GB or 256GB of solid-state storage, there’s plenty of power for almost everything you'd ever expect from an ultrabook. It's not going to play Crysis 3, and stumbles on Bioshock Infinite with anything but the very lowest settings, but it's good enough for everything else.

The S7 boots like a tablet, waking from dead in about seven seconds and resuming from sleep in only one. It rarely gets loud and almost never gets hot — the back of the base heats up a bit while you're playing games, but it's more sweaty than dangerous.

If you buy the S7, do it in a Microsoft Store. On those models, Acer bundles just three additional apps, including two from Intel — only Acer Crystal Eye, an overwrought app for your webcam, is Acer's fault. This is virtually clean Windows 8. If you buy elsewhere, though, the list explodes: the S7 comes with McAfee and Norton security and backup software, Cyberlink and Nero apps, and the NewsXpresso app that makes me angry with its name alone. Microsoft is doing a good job of enforcing clean software in its stores, and Best Buy and Amazon would do well to follow suit; but until then, you're stuck either hunting for a Microsoft Store or uninstalling a lot of junk on your S7. 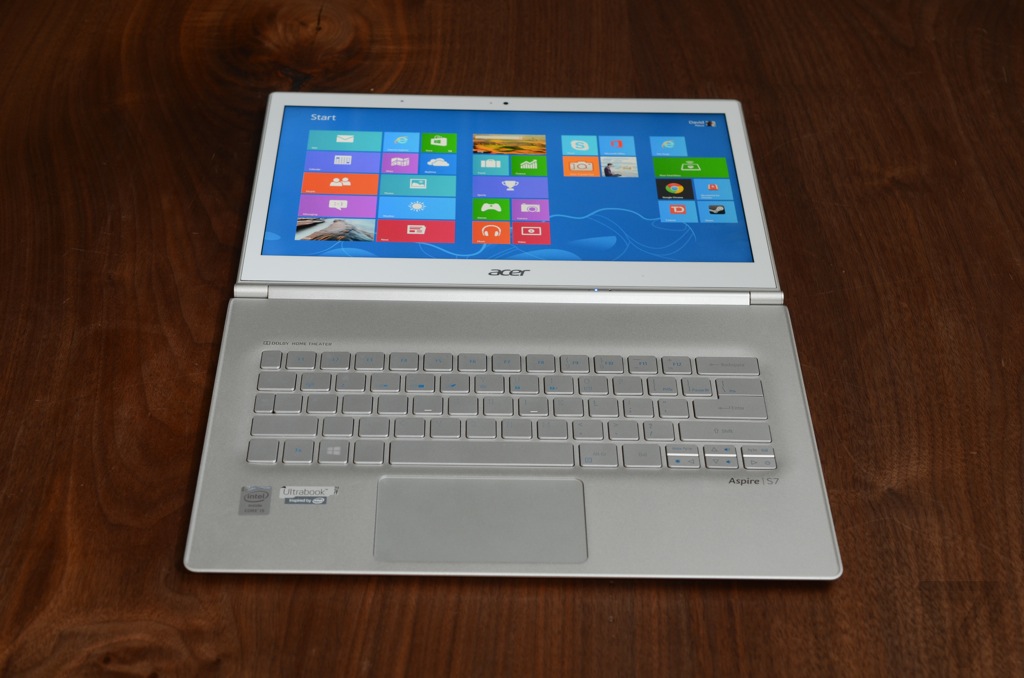 Not quite perfect, but the best all-around Windows 8 ultrabook yet

If you're shopping for a Windows 8 ultrabook, and price is no object, you should buy the Aspire S7. It has only a few, minor issues, like the trackpad and the occasional odd performance niggle. Mostly it's a powerful, useful, beautiful machine that's perfectly suited to the mobile lifestyle yet still a solid multimedia machine — as long as you have headphones, and maybe an external hard drive.

It's expensive, there's no question about that. $350 less buys you a MacBook Air, which offers utterly insane battery life and a better trackpad, but no touch, no 1080p, and in places inferior build quality. You can’t go wrong either way: the S7 is easily the best all-around ultrabook I've tested, and unlike the Sony VAIO Pro I don't have to recommend it as the least of evils. It's just a very good laptop.

My new friend Richard is sold, at least. As we hit hour five in the air, his laptop long dead and mine still going strong, he turned to me wide-eyed. “What is that? I need one.”