Tomorrowland is now in theaters, and since the project was mysteriously announced four years ago it’s appeared to be many things: an ‘80s-style children’s adventure, a mysterious sci-fi tale of interlocking mysteries, and — as I mentioned in our review — a story about the hope and optimism that technology and exploration can unleash in everyone.

The promotional ramp-up to the movie has also revealed that there’s a complicated backstory in play, with a tie-in book and mysterious promotional videos hinting at secret societies and grand utopian visionaries. The film doles out its share of those secrets, of course, but a huge chunk of the Tomorrowland mythology was revealed to those paying attention back in 2013.

That’s when the team at Disney Imagineering kicked off a viral marketing game called The Optimist. It began with the blog of a young girl named Amelia whose grandfather had worked with Walt Disney, and as players visited real-world locations and examined artifacts that “Amelia” mailed out, they learned about a mysterious group known as Plus Ultra and its connection to the 1964 World’s Fair (a location that’s popped up in Tomorrowland’s trailers). The Optimist culminated at 2013’s Disney D23 Expo, where players who completed the game found themselves welcomed into the ranks of the secret society. At the time I wrote about the experience and spoke with the team at Disney Imagineering about the creation of the game and how it was just one step in the company's exploration of a completely different kind of storytelling experience.

Warning: we discuss some minor spoilers to the movie's backstory below. 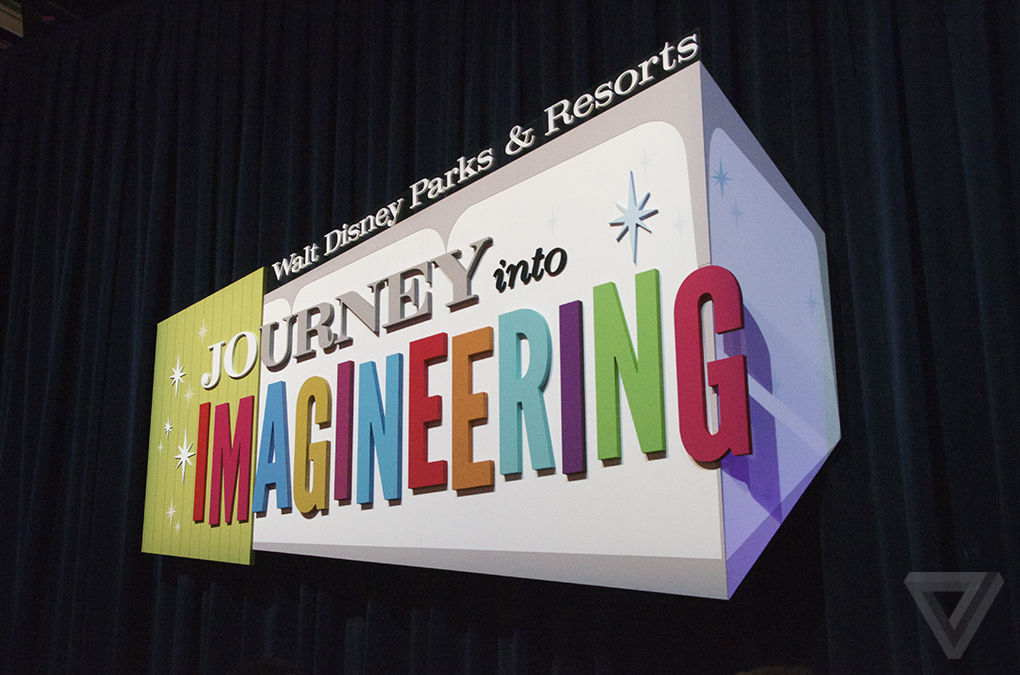 It was 9:58PM on a Sunday night, and I was standing in Disneyland’s Main Street Cinema with seven people I’d met just hours before. We’d spent the evening trekking through the park and the Anaheim Convention Center, tracking down clues left behind by a secret society called Plus Ultra that counted Thomas Edison, Nikola Tesla, and Walt Disney himself among its members.

A short film played across the room’s six screens, welcoming us to the society and detailing its plans for a city of the future — one based on the unlimited potential of technological progress. A glowing platform slid up out of the darkness, holding pins for everyone in the room. Secret totems that would mark us as members of the order.

Welcome to the world of The Optimist.

The latest take on the alternate reality game

Created by Walt Disney Imagineering — the think tank and creative group that dreams up, designs, and builds attractions for Disney parks — The Optimist is the latest take on the alternate reality game. ARGs are a type of multi-platform experience that first received widespread attention back in 2001 with The Beast. That Microsoft-produced title, designed to promote Steven Spielberg’s A.I., mixed movie posters, websites, and real-world events as it led players through a murder-mystery plot that bled out of their computer screens and into the real world.

The Optimist is linked to the mysterious Damon Lindelof and Brad Bird project Tomorrowland, but according to Scott Trowbridge, vice president of creative at Imagineering Research & Development, building an ARG wasn’t an isolated experiment. It’s just one step forward in the company’s larger pursuit of interactive experiences that put the audience at the center of the action — ones that can stretch beyond the historically niche ARG audience and reach more people than ever before. 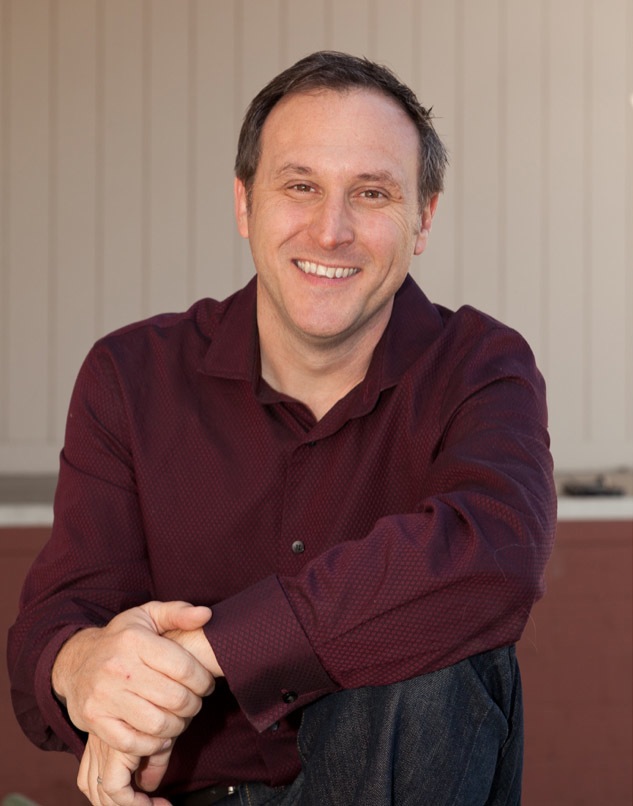 "What we’re spending a lot of time making sure we get awesome at are deeply immersive, participatory experiences," Trowbridge says. Disney has arguably had the "immersive" part of the equation down since the original Disneyland opened in 1955, with rides like the Jungle Cruise — and countless others since — becoming classics. As the park has evolved, the attractions have grown more ambitious, but logistics and technological concerns have largely limited Imagineering to creating fixed stories that audiences experience as they move through a ride. Now, Trowbridge says, that’s changing.

"More and more, technology is allowing us to do this. I think culture is kind of inviting us to do this, and frankly, I kind of believe there’s a changing form of narrative," he says. Expectations of what a story can be are shifting, allowing Imagineering to experiment with experiences where the guest has an active role in determining what happens next. Think of it as an open-world video game that you play in real life. "They can become much more immersive and engaging because the stories are much more personal," he says. "You’re participating in the story, not just being told a story."

"You’re participating in the story, not just being told a story."

It’s an evolution that doesn’t just impact the audience; it requires a dramatically different approach from creators as well. "You’re not authoring a specific fixed narrative," Trowbridge explains. "You’re authoring a story system, a story world, that has certain fixed points but that allows for various degrees of collaboration, various degrees of co-authorship." It requires that the creators behind the scenes — "puppetmasters" in ARG parlance — listen and observe, so the audience’s actions can help evolve the story. "Optimist was an example of that, where there were some spaces designed in the structure for that audience voice to be influential." 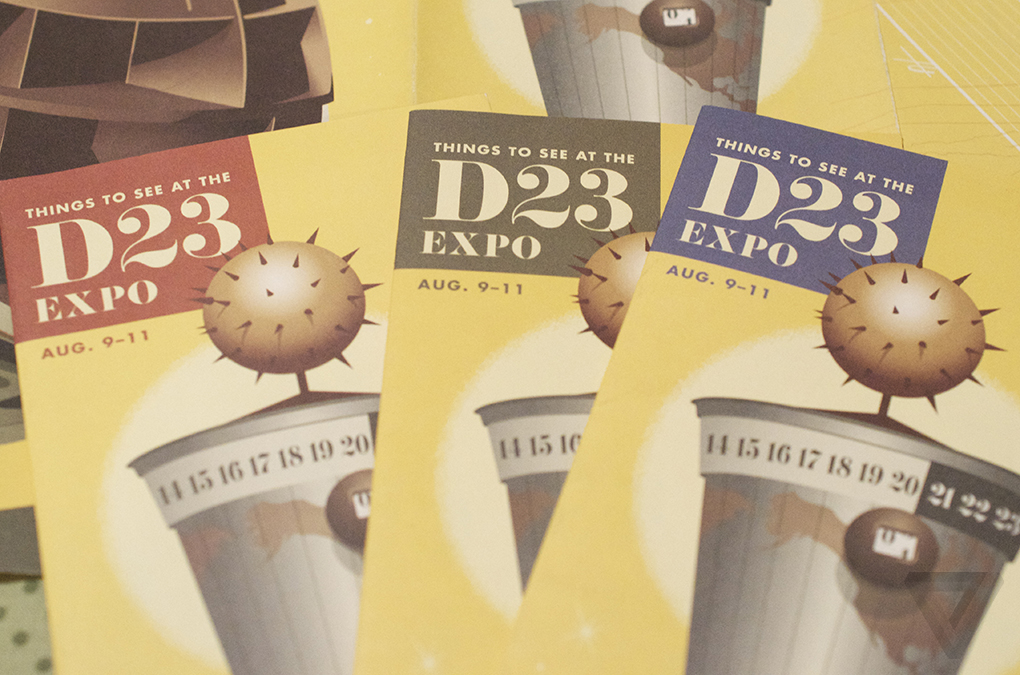 Some of these projects take the shape of transmedia tales, but the principles can also be applied to part of an attraction, or contained within a theme-park adventure. At Walt Disney World, Imagineering has run "play tests" with a pirate game called The Legend of Fortuna, where guests interact with live actors and even take on role-playing duties themselves. Imagineering’s work on this front was also on full display during Disney’s D23 Expo earlier this month.

A play test for a treasure hunt was happening on-site, where attendees were tasked with seeking out "archaeologists" throughout the convention center. Elsewhere, an animatronic fortune teller named El Fortuno interacted with the audience thanks to a live performer and a sophisticated combination of sensor arrays — the kind of behind-the-scenes technology that could tell a future animatronic character how many people were standing in front of it and what emotions their expressions indicated, allowing it to tailor its responses accordingly.

And then, of course, there was The Optimist.

Launched on July 3rd, the game started as many ARGs do: with a blog. A fictional college student named Amelia began writing about her grandfather, Carlos, and the strange things she found in his apartment after he died. A Twitter account followed, and players were soon hunting through the history of the 1964 World’s Fair, where It’s a Small World debuted. A mysterious artist named Wallace appeared online, pointing participants to some of Walt Disney’s favorite locations. Multiple real-world meet-ups followed as players discerned the outlines of the mysterious society, and Wallace himself hosted a booth during all three days of the Expo. 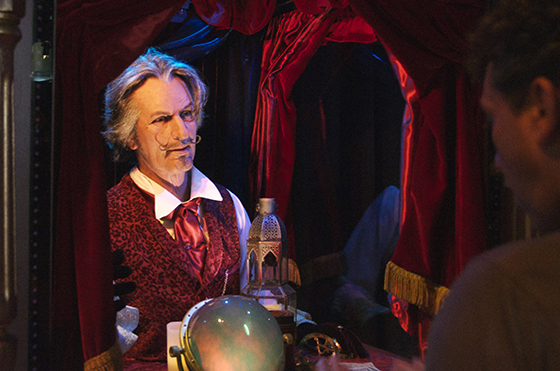 Behind-the-scenes technology that can TRACK your expression 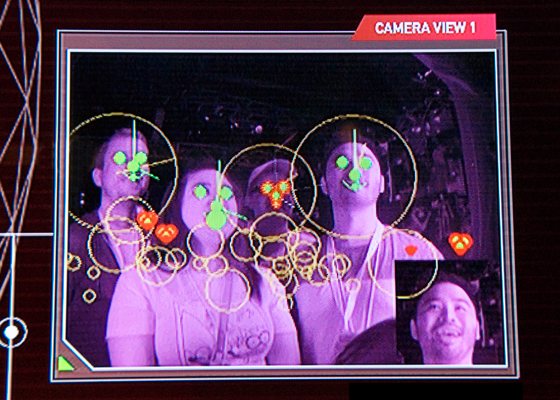 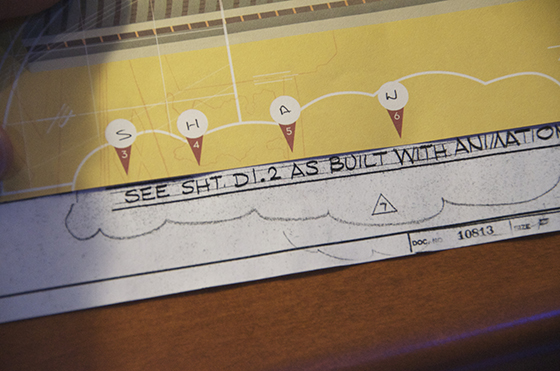 The puzzles couldn't be solved without pairing with other players 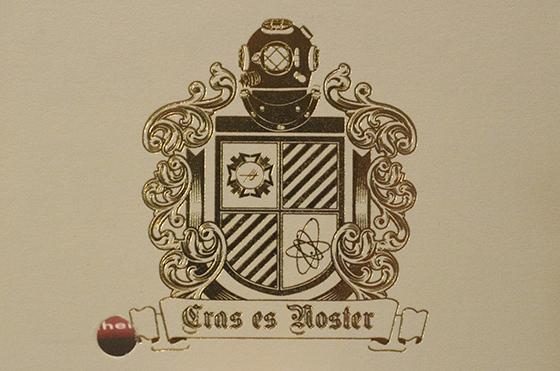 There attendees could sit down and chat with the character — and if you had the right password, you’d receive a map that sent you off on the final adventure. I’d followed The Optimist from afar, but at D23 I jumped in with both feet. Just in terms of execution, the game held several advantages from the start. Using the real history of Walt Disney and the World’s Fair as a backdrop gave the fictional elements an immediacy and believability, and the Expo mission was designed to require real-world collaboration; Wallace handed out several different maps, and you couldn’t solve the puzzles unless you paired up with other players. While diving through audio file spectrograms to glean clues is fun, it’s nothing compared to the bonds you make with total strangers as you unearth story beats in a physical location.

My group grew from two, to five, to eight. Sometimes we interacted with actors playing knowing society agents, other times we worked from written clues. It only took a few hours to complete the quest, but as we wound past the other park guests a sense of momentum took hold. There’s something about being a group with a secret in a sea of thousands. It pulls you deeper into the fiction; it makes you want to believe.

The most striking difference, however, was the tone. ARGs often traffic on dystopian terror or paranoia, and while The Optimist is about a secret society, it’s one whose aim is to create a peaceful, technological utopia. Yes, this is Disney we’re talking about, but the name of the game is no coincidence, and the players I encountered along the way reflected that mindset — creating an overall experience that felt much more accessible than any ARG I’d played before.

More accessible than any ARG I'd played before

Trowbridge explains that the shift was a conscious choice. "A lot of time [ARGs] are done around certain kinds of genres of film or activity," he says. "So really, we were trying to say, ‘We want to see if we can broaden out our audience for this.’" To that end, the team looked beyond just delivering on the treasure hunt and mystery elements. "Some of the other things we really challenged ourselves with were, ‘Can we actually create an emotional resonance with this? Can we actually speak to, with these kind of experiences, an audience that hasn’t typically engaged in this kind of thing?’" 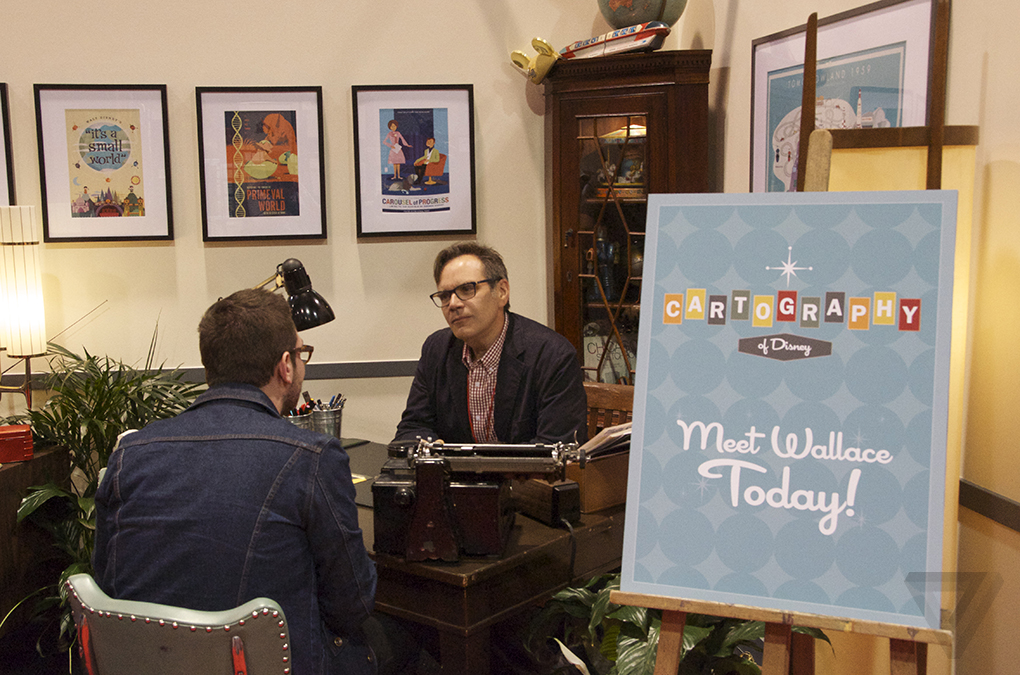 For those that followed The Optimist from its onset, the heart of the game was the relationship between Amelia and her mother, Tanya. Amelia's constant digging causes strain in their relationship, and since the players were doing the investigating they were implicated in the rocky relationship between mother and daughter. The game’s emotional climax came when Tanya appeared in person at the Main Street Cinema to learn about her father’s involvement with the society firsthand — surrounded by a number of Optimist players. 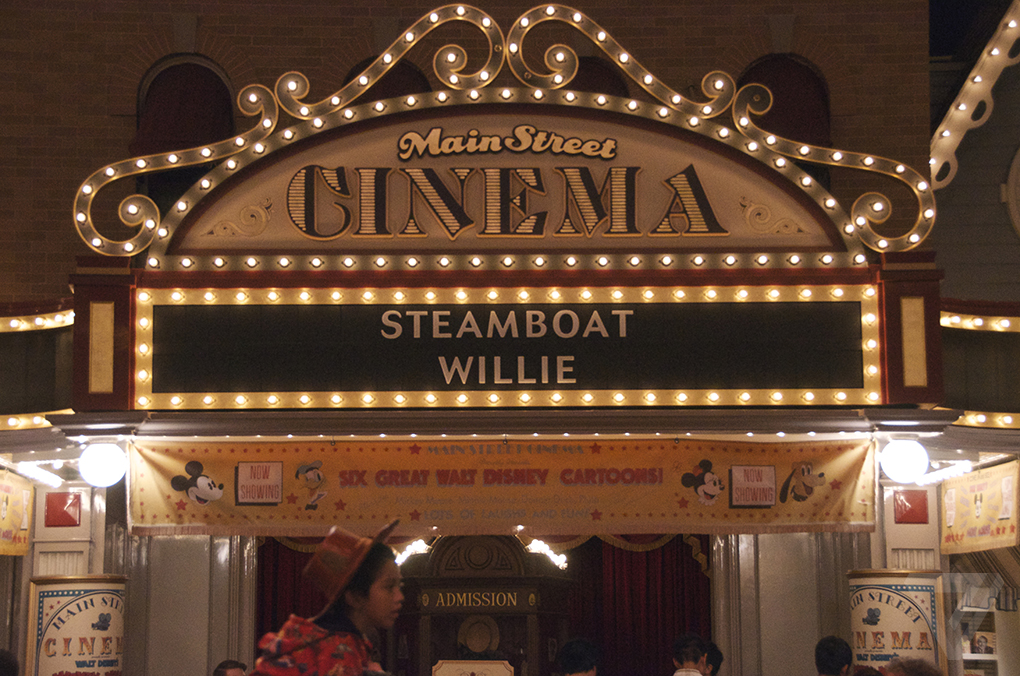 Hastin Zylstra, a Disney fan that followed the game from the very beginning, live-streamed the event to players that couldn’t attend. "What amazes me is that from the moment she showed up, we [game players] never dropped out of character," Zylstra says. "This concept of being able to share with a character was a really interesting sort of emotional feeling. Because you know, I’ll 100 percent admit, when she went in the cinema and saw the video, and called Amelia on the phone — I was in freakin’ tears."

"The real goal is to actually develop a community of storytellers."

However, with the art form still in its relative infancy, people with experience working in these mediums are still somewhat rare. It’s an issue that led to the creation of Imagineering’s Living Worlds program. Announced in 2012, Living Worlds is a sort of Sundance screenwriting lab for participatory and transmedia projects; artists can submit their idea, and if they make the final cut they’ll have the opportunity to have their concept produced by the Imagineering team. "The real goal is to actually develop a community of storytellers that are going to be good at this kind of thing," Trowbridge says, "so what we’re trying to do is to find ways to provide energy, provide momentum, provide a body of experience for storytellers in that space." 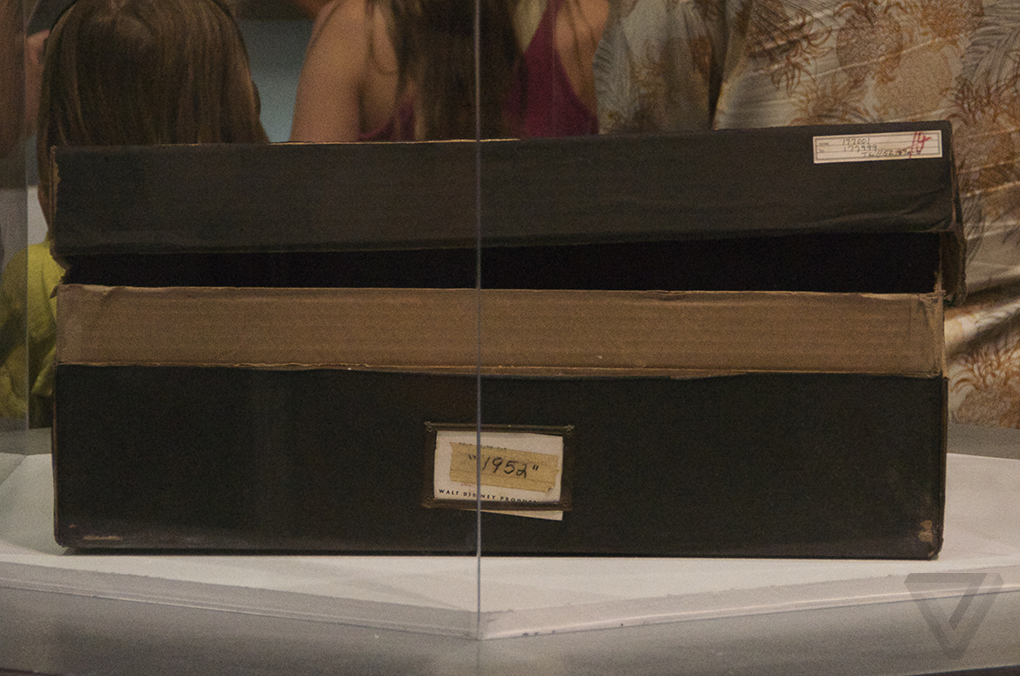 And what about Tomorrowland? When director Brad Bird hopped aboard the film, it was described as a "multi-platform" project — and the symbol of the ARG’s secret society is plastered all over the materials Lindelof and Bird say inspired the film. Is The Optimist really over?

"Well, Amelia is still tweeting, maybe that’s a question best asked of her," Trowbridge tells me. "I certainly wouldn’t want to speak on her behalf."

Update, May 23rd, 9:00AM ET: Updated with new introduction. This story was originally published on August 20th, 2013.