Microsoft's Xbox One Showcase event at Gamescom 2013 is primarily intended to let people get to grips with its next-gen console, but there are a few noteworthy news items as well. Firstly, Fable Legends has been announced as an upcoming Xbox One exclusive, the latest in the long-running series of role-playing games from Lionhead Studios. Microsoft says the new game will feature an "online world of Albion like you've never seen before," while the big gaming appeal is pitched as the ability to play as either the villain or the hero.

The Unreal Engine 4-powered game is still at the pre-alpha stage of development, so some animation stutters were predictably visible in Lionhead's demo, however the whole thing conveyed a real sense of next-gen gaming. The gameplay looks to focus on tactical team play, whether with AI sidekicks or via online multiplayer, and villains will be able to prearrange monster spawn points and other nasty surprises for oncoming heroes.

Mojang's new game, Cobalt, will be coming to Xbox 360 and Xbox One, while Tom Clancy's The Division will get exclusive content on Xbox One.

Legends of fables and football unite on One consoleFIFA Ultimate Team will include an Xbox One-exclusive option, allowing you to combine the stars of today with those of previous years. Ruud Gullit and Freddie Ljungberg came out on stage to talk up the possibilities and excitement of being able to play historic icons like Franco Baresi alongside the stars of today. Freddie and Ruud will be the first two legends dropped into that new game mode. Microsoft topped off the happy FIFA news by announcing that every European pre-order of Xbox One up to this point and until stocks last will come bundled with a free digital download of FIFA 14. 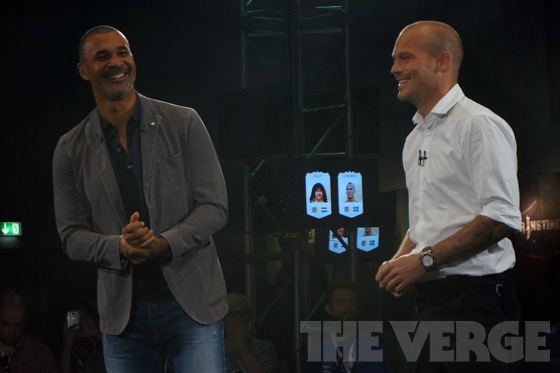 From PopCap Games, Peggle 2 and Plants vs. Zombies: Garden Warfare are coming to Xbox One first. The former game will be a launch title, while the latter will come with Kinect support at some point in 2014.