Share All sharing options for: The creators of 'The Walking Dead' try to strike gold again with a hardboiled fairy tale

Telltale Games writer Pierre Shorette is perhaps more aware than anyone of the pressure The Walking Dead’s success put on members of the studio. "When I started, we had a table that all of the Game of the Year awards arrived on, and it happened to be right next to my desk," he says. "Sometimes they’d show up on my desk — in front of my monitor." While the accolades were piling up, Shorette was hard at work on The Wolf Among Us, the long-awaited game that fans hope will reach the high bar of its predecessor. "I've definitely felt this pressure," he says. "And it should be there, because Walking Dead was fantastic."

Shorette is right to be nervous. The Walking Dead was nine-year-old studio Telltale’s breakout hit, popularizing a style of "interactive narrative" that was heavy on storytelling and light on traditional gameplay. And it introduced perhaps the most iconic character of the year: Clementine, the resourceful but vulnerable girl who is both the game’s emotional core and its moral compass. With a second season of The Walking Dead on its way, the team behind The Wolf Among Us is trying to carve out its own niche, with similar gameplay but a radically different style.

The Wolf Among Us is based on Fables, a comic launched just a year before The Walking Dead started publication. But while the latter’s AMC series has made it a household name, attempts to move Fables to film and TV have fizzled. The semi-realism of The Walking Dead’s zombie apocalypse is immediately understandable, but the world of Fables, which puts fairy-tale characters into real-world New York, is a slightly harder sell. Shorette, however, thinks the release is coming at a perfect time. "I think that in a period where you have Once Upon a Time, Grimm, tons of fairy tale-related movies coming out, it feels like we’re hitting a pocket where we don’t have to explain as much as we would have had to 10 years ago."

Like the comic itself, The Wolf Among Us starts with a murder mystery. "We base it around this detective story, which people can latch onto, and then you onboard the Fables element," says Shorett. Along the way, players’ games will branch based on choices large and small, one of the most compelling features of The Walking Dead. Telltale is fairly open about the fact that it’s not creating completely different paths for everyone, but Shorette promises that players will feel as though they’re making real decisions about the course of the game.

The story centers on Bigby Wolf, a reformed monster and literal big bad wolf (though he usually appears human) who serves as sheriff in an enclave for fictional characters known as Fables. Within a few minutes, he’s embroiled in a fight; not long after, he’s attempting to make sense of a rare killing in Fabletown. Bigby, a major character in the comics, is painted here as a hard-talking antihero a few steps away from giving in to his bestial nature, while other Fables — including a mild-mannered Beast and petty Ichabod Crane — fill out a world that’s by turns seedy and comically bureaucratic. These two qualities mirror Bigby’s choices, as players guide him towards being a law-abiding detective or an impulsive, violent animal. 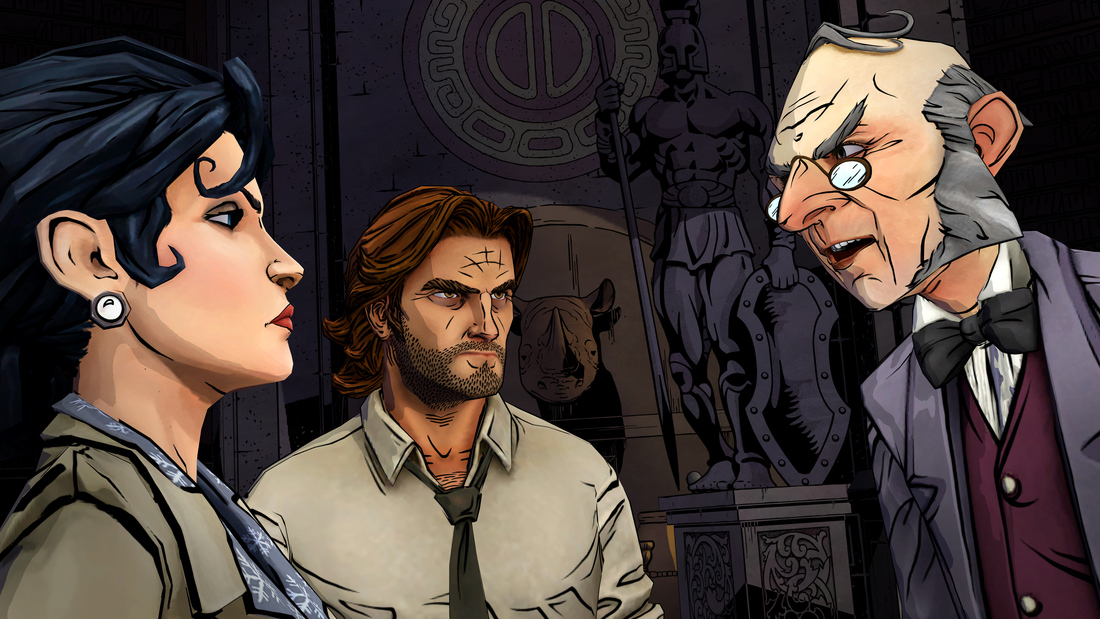 Accordingly, almost everything in The Wolf Among Us is over the top, opening on the prostitutes, tenements, and neon of a gritty 1980s New York. Bigby’s dialog options give you the chance to be gruffly kind, make wry wisecracks, or tell just about every character to "fuck off." An early fight scene lets you choose how to smash an abusive, violent drunk into various pieces of furniture before crashing out a second-story window. The man is eventually subdued — but not killed — by an axe to the head. The murder of a Fable is shocking, but it’s largely because just about nothing seems to faze them.

"I don’t want you to feel like ‘This is story time, this is game time.’"

This aesthetic is reflected in how you play. The game’s basic mechanics are almost identical to those of The Walking Dead, but combat and conversation are emphasized over traditional "place object on object" puzzles. Finding the right clues is still important, but at least in the game’s early sections, you’re more likely to show them to a colleague than use them to fix a swing. "We want it to feel organic," Shorette says. "I don’t want you to feel like ‘This is story time, this is game time.’" While Telltale’s games are often put in the point-and-click adventure genre, he doesn’t think the label fits. "I don’t think you can classify [The Wolf Among Us] as an adventure game. It’s almost a genre unto itself."

The biggest difference between The Walking Dead and The Wolf Among Us may end up being how the same storytelling engine serves two very different genres. The post-apocalyptic Walking Dead was an exercise in constant anxiety, with a vulnerable protagonist who could lose everything by making a bad decision or telling one lie too many. Though the first half-episode of The Wolf Among Us gives you just as many chances to make someone hate Bigby, its hardboiled fantasy style makes him a powerful player in a world of nearly immortal characters. It’s hard to say whether fans will find the new direction as satisfying, but it gives Telltale a much-needed chance to explore the limits of its medium. And if some players don’t like it — well, there’s always the second season of The Walking Dead.

The first of five episodes of The Wolf Among Us will launch in late September or early October for the Xbox 360, PlayStation 3, PC, and Mac.