Yesterday morning at 8:41AM EST, a NASA airplane took off into the gray sky over Wallops Island, Virginia, heading straight for a massive dust cloud off the coast of Africa. While flying directly into such inhospitable conditions may seem like a death wish, the pilots of this particular plane weren't in any danger. Instead, they were back on safe, solid ground in Wallops and in Dryden, California, controlling the unmanned aircraft remotely. And the success of their mission could not only help scientists better predict hurricanes — it could also help reset some of the negative public opinion about drone usage. That's at least the hope of the company behind the drone, military contractor Northrop Grumman, which points out that the very same type of aircraft was used to help find and kill Osama bin Laden.

"If we publicize a bit more the nontraditional uses it might change some perceptions," says Jessica Burtness, communications representative at Northrop Grumman's Global Hawk division. "I know our unmanned aircraft have been used largely for war-fighting and combat purposes, but they've also been used for humanitarian purposes and for research by NASA." Luckily for Northrop, NASA is taking it upon itself to help publicize its new Global Hawk mission, holding a public media briefing at Wallops on September 10th. 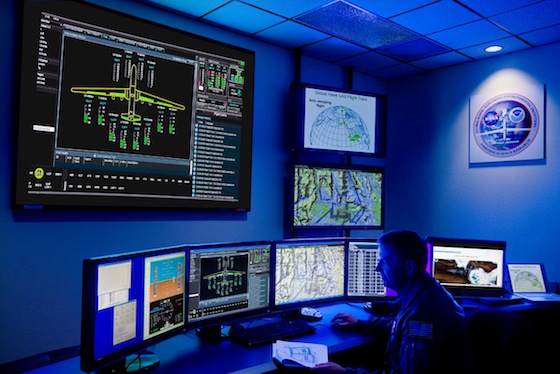 In fact, this NASA drone mission is actually just the latest in a long series of the US space agency's experiments with unmanned aircraft, which date back to the late 1960s, when NASA first attempted to develop a remote pilot system for manned propeller planes. At that time, the immature technology relied upon nose-mounted fisheye lens cameras to give pilots on the ground a view comparable to that of a pilot on board, and it never really moved past the research stage. But in the late 1990s, NASA launched a program to partner with commercial aerospace companies and develop new, more advanced sensors for unmanned aircraft. From this program came the iconic Predator combat drone, made by General Atomics, as well as many of the fundamental technologies behind the modern drone boom.

As for NASA’s recent flights into dust storms, those are part of an ongoing effort: the Hurricane and Severe Storm Sentinel (HS3), in which the agency will be flying two former military Global Hawk drones on repeated, nearly daylong stints during each Atlantic hurricane season from 2012 to 2014. The drones are each equipped with a different set of instruments and together are able to gather data about cloud structure, temperature, windspeed, vapor and a host of other factors related to tropical storms.

Their goal is to "investigate the processes that underlie hurricane formation and intensity change," with a specific focus on how storms are impacted by the enormous mass of dry air over the Sahara desert. "The fact that we can observe these storms further east has the potential to increase our ability to provide earlier warnings of hurricane development," says Christopher Thorncroft, chairman of the Department of Atmospheric and Environmental Sciences at the University at Albany, who’s one of over 20 scientists working on the mission.

Tropical Storm Frank as seen from the base of a NASA Global Hawk drone in a 2010 flight (Credit: NASA/NOAA)

Aside from avoiding risk to pilots, "the Global Hawk aircraft have the advantage of duration and altitude," says Beth Hagenauer, a public affairs specialist with NASA's Earth Sciences division, highlighting these specific models' ability to stay aloft for 28 hours and reach heights of 60,000 feet.

But how NASA ended up with the drones under its wing is another story that speaks to the growing interest from drone manufacturers to push their wares to civilian customers on US soil, bridging the two spheres — warfare and peacetime use. The push comes as the US Federal Aviation Administration, the agency that regulates the country's commercial airspace, is gearing up to allow drones to fly everywhere manned planes can by 2015 (right now, the FAA limits drone usage to below 400 feet or to a few select permit holders at higher altitudes, including NASA.)

The Global Hawk is a line of unarmed surveillance and reconnaissance drones initially developed for the US Air Force in the late 1990s. The first models entered US combat operations overseas shortly after the September 11th, 2001 terror attacks. Then in 2007, Northrop Grumman had a breakthrough: the US Air Force took a Global Hawk out over California to capture "high resolution, near real-time images" of out-of-control wildfires and shared them with firefighters, the first instance of military drones being used to directly help US civilians. That same year, the Air Force gave NASA two of the first seven Global Hawk drones ever constructed to use for its science missions. Both planes had only been flown on test flights, and never actually used for combat-related missions. 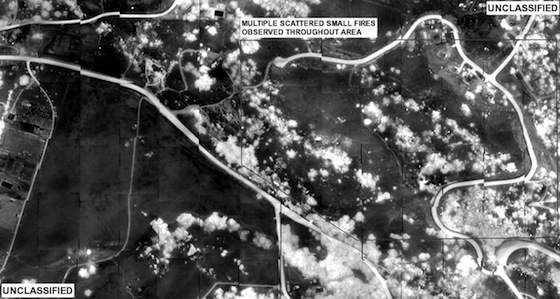 After that, other Global Hawks popped up to aid responders in several other disasters, including the aftermath of the catastrophic 2010 Haiti earthquake, the 2011 earthquake and tsunami that struck Japan, and yes, the seminal 2011 Bin Laden raid. "I don't think many people know about these uses," notes Burtness, describing the humanitarian and research missions. She may be right: surveys indicate that while most Americans support drone usage for targeted killings overseas, they are more concerned about privacy violations when it comes to drone usage for non-lethal purposes in the US.

A few US advocacy groups have been vocal about additional privacy concerns with drones, which can be flown in places that manned aircraft cannot, for longer periods of time, and at lower cost, raising their potential for misuse. "The major things that protected individual rights before unmanned aircraft were cost, time, and practical considerations," says Amie Stepanovich, director of the domestic surveillance project at the Electronic Privacy Information Center, a privacy advocacy group. "Advances in technology have really lowered those barriers." 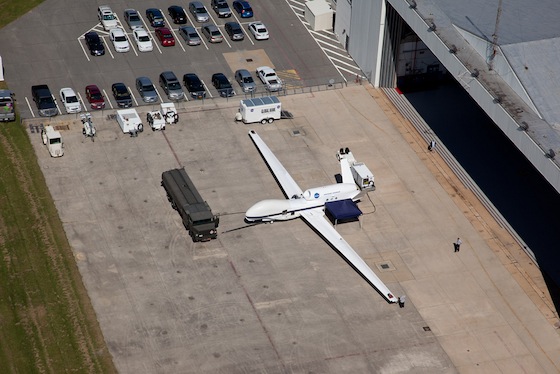 Even in the case of NASA's Global Hawk drones, which are mostly flying over uninhabited expanses of water, Stepanovich says that "incidental" collection of personally identifiable data is something planners at NASA and Northrop Grumman should be taking into concern. Stepanovich points to the fact that NASA had to fly its Global Hawks from where they were originally stationed in California across the US mainland to get to Virginia. "Overall, drones can be an incredibly positive thing, [drone operators] just need to make sure they have the right policies in place before they put them in the air," she says.

NASA, for its part, doesn't share too many of those privacy concerns right now, saying it doesn't even have the technical capacity to resolve details small enough to identify individuals. "The instruments NASA flies on planes and satellites are designed to take very wide views of the earth below, on the scale of towns and counties, since our mission is to understand changes of the whole planet," explains NASA spokesperson Stephen Cole. "You can’t do that efficiently if the instruments focused as narrowly as a house or a street."

"Overall, drones can be an incredibly positive thing."

And NASA seems quite satisfied with its former spy drones abilities' to help in that regard: the agency recently renewed its partnership with Northrop Grumman through to 2018. If all goes as planned and the Global Hawks do help NASA scientists help to better forecast hurricanes, they could more effectively help drone makers sell the American public on the idea that these are more than tools of war. "There’s not a whole lot we would see that you wouldn’t see when looking out of the window of your Southwest airplane," says Burtness.