IFTTT hooks up with Twitter to bring back tweet-based triggers

IFTTT hooks up with Twitter to bring back tweet-based triggers

When Twitter announced a strict new set of rules for how developers could use its API, automation service IFTTT removed all of its popular Twitter triggers, which let you do things like archive your tweets and save links you favorite to Pocket. Today, IFTTT is reviving four of its most useful Twitter triggers: "new tweet by you", "new tweet by you with hashtag," "new link by you," and "new favorite tweet by you." This means you can turn off your lights whenever you tweet #LightsOut, archive all your tweets to Evernote, crosspost your tweets to App.net, and save links you favorite to a text file. This time around, the company did it with Twitter's help.

Back in September, IFTTT feared that its ability to archive your tweets didn't abide by Twitter's Developer Display Requirements — which mandate that "tweets always have to look like tweets," and that you can't "upload Twitter content to a cloud-based service." "We removed the triggers because we noticed a policy change and didn't see a clear way of keeping them in light of [Twitter's] developer policy," says IFTTT"s head of Business Development Leor Stern. After spending the last few months working together, Stern and Twitter came to a mutually beneficial agreement that operates within the bounds of Twitter's current developer guidelines. 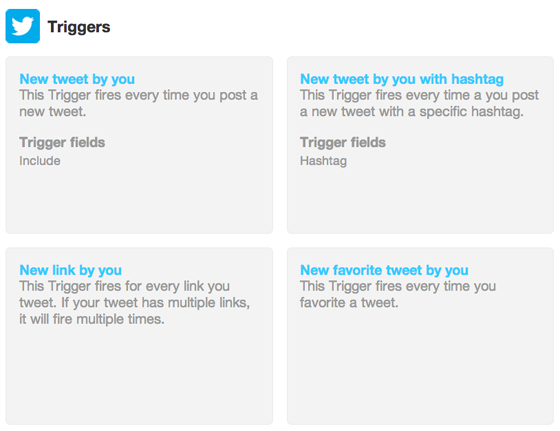 IFTTT didn't bring back all of its Twitter triggers, however. This round focuses most on your own tweets, whereas some of the old triggers let you do things like archive the public tweets of another user, or unlock your front door when your spouse tweets #TheEagleHasLanded. Stern says that IFTTT plans to add back some of these other triggers, starting with the ones most requested by users.

IFTTT has been moving at a rapid clip, having recently announced embeddable recipes, New York Times integration, and an iOS app that lets you upload all your selfies to Tumblr. The San Francisco-based company has grown to more than 15 people, and shows no signs of stopping.