Status update: the link between Facebook and depression isn't so simple

Another day, another "Facebook makes you miserable" headline. For the last few years, the social network, which now claims nearly 700 million daily users worldwide, has been the subject of an endless stream of stories in the media and sociology journals claiming that it’s "making people depressed." Facebook usually keeps mum when each fresh wave of negative press hits, each URL another arrow flung toward its iron-clad gates. To a casual observer, it would appear that Facebook has a really big problem on its hands.

Dozens of articles by reputable publications like NPR and The Economist piled on to the latest piece of evidence: a study by the University of Michigan which measured the moods of just 82 people, all of whom were college-age — hardly a representative sample of the company’s 1 billion users worldwide. Even though the researchers’ conclusions were based on college students, the media attention they received was not. It seems we want to believe Facebook makes us sad, even if the evidence is thin and stale.

When you look back at the last few years of psychological studies about Facebook and its effects on people, a few trends emerge. One is that these studies have a vague definition of what it means to "use Facebook." The University of Michigan’s study, for example, asked students every few hours how much they had been using Facebook on a 1-100 scale. They compared this data with student responses about their well-being and perceived "satisfaction" with their lives, as monitored over the same period. The study concluded that the more its subjects used Facebook over a two-week period, the more their "life satisfaction levels" dropped. 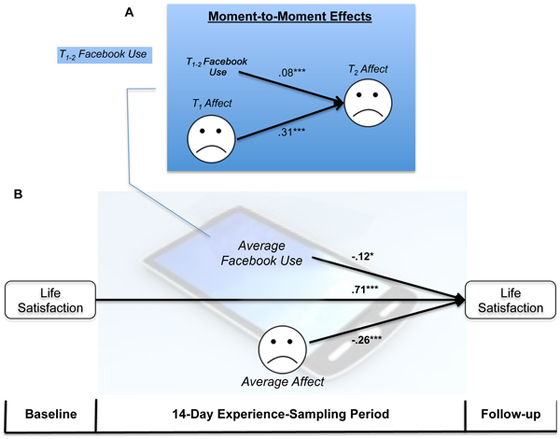 But the study didn’t ask subjects if they were surfing the news feed, playing Farmville, chatting with friends or cyberstalking their exes — activities that could elicit very different kinds of reactions. To say "Facebook makes you depressed" without any of these details is like saying "the internet makes you depressed" without checking on what sites you’re browsing.

A study by the University of Canterbury in 2008 set out to determine how internet use impacted people, but quickly realized that measuring "internet use" as a whole was moot. Researchers came up with six different ways to measure internet usage, a "multiple-factor" model that separated chatting with friends from searching for jobs, playing games, and looking up stuff on WebMD. As you might expect, surfing the web and chatting with strangers increased levels of depression, while talking to family and friends decreased it.

"The number of Facebook friends was negatively associated with emotional and academic adjustment among ﬁrst-year students."

"Spending a lot of time on Facebook relates to low self-esteem, a ﬁnding that parallels the relationship between internet use and self-esteem," says Dr. Maria Kalpidou, lead researcher on a study in 2011 about Facebook use among college students, but by only counting time spent on the service, we’re missing a big part of the picture. "The number of Facebook friends was negatively associated with emotional and academic adjustment among ﬁrst-year students," says Kalpidou, "but positively related to social adjustment and attachment to institution among upper-class students."

In other words, friending everyone you just met is probably an unhealthy sign, while having a ton of long-term friends through Facebook says the opposite. Even amongst college students, results can skew greatly simply based on your grade and how many friends you have. Two other studies confirm these findings, including one study conducted in partnership with Facebook itself, which concluded that "overall [social networking] activity, particularly friend count, was positively correlated with [social capital.]" The University of Michigan’s study, on the other hand, concluded that friends lists play no part in how depressed Facebook can make you.

So how does Facebook deal with all this misinformation, not necessarily from researchers, but from media outlets that have taken coverage overboard? Headlines like "Facebook is bad for you," "Facebook Causes Depression," and "Feeling Sad? Study Says Facebook Is To Blame" littered the web once Michigan’s youth-focused study was published — the latest of many studies to critique Facebook. The social network started by hiring a data science team of its own, including researcher Moira Burke, who had previously studied Facebook while at Carnegie Mellon University. Facebook doesn’t usually refute the conclusions of every study that comes out, but Burke spoke to The Verge in response to the latest attention-grabbing study.

"The [Michigan] survey doesn’t include questions about whether [subjects] directly interacted with people on Facebook, or just read stories or played games," says Burke. "When you’re asking the same person multiple times per day, both their Facebook use and their mood are likely driven by other factors, like the time of day or how stressed or bored they are."

"The majority of studies in all areas of psychology are done with college students, and it’s usually reasonable to generalize the results to other adults," says Burke. But college is the place where Facebook was built, and is arguably the period in a modern person’s life when Facebook is most heavily used. It’s like going to a bar to study the effect of booze and talking exclusively with alcoholics.

There’s likely some truth to the University of Michigan’s study, since Facebook use seems to share a lot in common with internet use, but it fails to provide much insight because different subsets of people use Facebook very differently. Teens, for example, seem tired of the service, while user growth in developing countries is exploding. In the Philippines, for example, "Facebook is literally becoming the internet," Quartz says.

Burke doesn’t deny that loneliness and depression are a part of Facebook, but suggests that only certain behaviors elicit these kinds of reactions. "Passive" Facebook use, the kind of "news feed surfing" done by less outspoken people, hasn’t been linked to better subjective well-being, Burke says. Current research would suggest that surfing Facebook for hours in fact makes you feel worse, just as sitting alone in a crowded restaurant on Valentine’s Day might make you feel lonely.

In the Philippines, 'Facebook is literally becoming the internet.'

"People who feel a discrepancy between the social interactions they have and those that they desire tend to spend more time observing other people’s interactions," writes Burke. "Whether the loneliness causes the clicking, or the clicking causes the loneliness is left to [future studies.]" In short, the correlation between surfing Facebook and feeling depressed doesn’t necessarily mean causation, but it is real.

Burke is quick to point out that all signs indicate that Facebook chatting and commenting with close friends increases your well being, but even for the extroverts, certain activities on Facebook have been shown to have negative effects on users. A prime example is vacation photos in the news feed, which researchers at Humboldt University and Darmstadt Technical University say are the most common causes of resentment and bitterness on Facebook. No one can deny that Facebook amplifies FOMO (Fear of Missing Out), but if that’s the case, articles should read "surfing Facebook photos causes depression," not "Using Facebook causes depression."

How do you surf?

"The body of research studying Facebook use and well-being shows that the outcomes depend on how you use the site and whom you talk to," says Burke. If you talk to Facebook, for example, they might tell you that "the more people use Facebook, the better they feel," but even this conclusion feels as broad as Michigan’s. If we were to evaluate Facebook usage using a multi-factor model, we might discover that elderly users have a blast on Facebook, or that people who use Facebook just for messaging see their mood rise, while those who simply browse their feed endlessly get depressed. Facebook’s effect on us, is, in a word, complicated, since it can widen our insecurities but also amplify our self-esteem depending on how we use it and how extroverted we are. And today, we use Facebook to do a lot of things.

"[An] unprecedented scale of information sharing naturally provides a ground for envy."

As the study by Humboldt University and Darmstadt Technical University notes, depression, envy, scorn, and bitterness should be expected when introducing massive amounts of social information about a community to its members. "[An] unprecedented scale of information sharing naturally provides a ground for envy," the study says. "[Social networking services] offer users easy and transparent means to compare and ‘benchmark’ themselves against their peers, inducing them to engage in social comparison."

It’s not Facebook specifically that’s making you depressed — it’s everything. It’s the texts you don’t receive. It’s the exes your friends can’t seem to get rid of. It’s the cyber-bullying on Ask.fm. It’s the indexing of everything you do or say, and the photo of yous, passed out on the floor of a bar that will exist on web servers until the next ice age. We focus on Facebook because it's the largest and most information-packed of our 21st century social networks, but that only makes Facebook Exhibit A in a future where we’re all hyper-connected. We’ve all felt the pangs of envy or depression that internet-induced-FOMO provides. Facebook is just the perfect scapegoat.