Share All sharing options for: A map of New York City's 500,000 annual stop-and-frisks

What do half a million police stops look like? As part of a project for Columbia Journalism School, students were tasked with mapping all of the 532,911 stop-and-frisks performed by the NYPD in 2012. The result is the map below, built in RStudio with geolocation data from the New York Civil Liberties Union. It's also coded by race, with blue dots representing African American suspects, red standing in for caucasian stops, and green for asian or Pacific islander. Damien Spleeters, a student who published the results on Twitter, found the results surprising. "I didn't expect to get such a clear depiction," Spleeters says. "That was brilliant." A federal judge ruled the impromptu searches unconstitutional earlier this month. 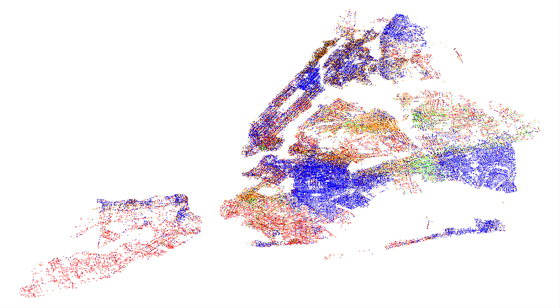