After news leaked of Apple's upcoming iPhone event on September 10th, it was assumed the new iOS 7 would be announced at the same time — but now there's proof. Today, a developer named Owen Williams received an email indicating that iOS 7 would be released to the general public on the 10th, giving non-developers their first peek at the controversial operating system. The email comes from Nuance, which works closely enough with Apple to know the date in advance.

The news could also indicate that the release date of the new iPhones will come much closer to the September 10th event itself. Apple could even opt for a day-of release, a move the company has executed successfully with other products, but never attempted with the iPhone. 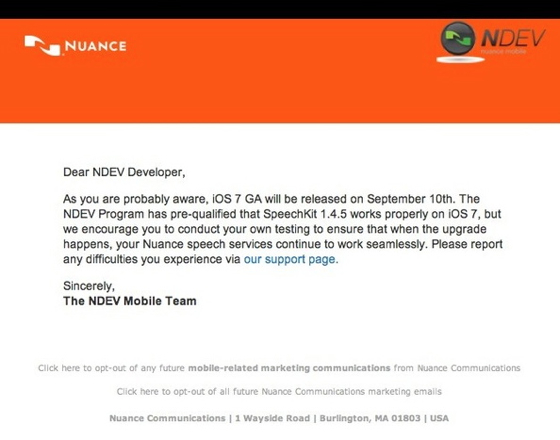 Update: It's important to point out that if true, this release plan would deviate significantly from Apple's past approach. The company normally gives developers plenty of time to have their apps submitted for a new version of iOS. Further, it has never released a major iOS update on the same day as an iPhone hardware announcement. With this email, Nuance could be referring to the Golden Master (GM) build of iOS 7. That's the finalized, feature-complete version of the OS that Apple has traditionally provided to developers ahead of a consumer rollout.