Sony combines mirrorless camera and DSLR with the tiny new A3000

Share All sharing options for: Sony combines mirrorless camera and DSLR with the tiny new A3000

From the entry-level NEX-3 to the pro-level NEX-7, Sony's made a name for itself cramming big sensors into small camera bodies. The company's doing it again this week, but with a slightly different tack: it's fused the body of a DSLR with the sensor, control setup, and lens options of a mirrorless camera. The new Alpha A3000 comes with a 20.1-megapixel APS-C sensor, an electronic viewfinder, 1080p video shooting at 60 or 24 frames per second, and a dozen or so picture filters and effects, and an E-mount. So far, so NEX.

The body of a DSLR, the innards of a NEX

But the A3000 looks much more like a shrunken DSLR, with a roomy grip for your right hand, a mode dial on top, a hotshoe, and buttons and dials everywhere. It's smaller than most DSLRs but obviously still larger than most mirrorless cameras, and it's quite comfortable; I found it easier to hold in one hand than any NEX camera I've used. This camera is Sony's attempt to blur the line between mirrorless camera and DSLR, and do it at a price that'll make any DSLR shopper look twice: $399.99 with a black 18-55mm kit lens. It's very much an entry-level camera, with few bells or whistles to speak of, but thanks to its E-mount compatibility it offers some growing power — and a cheap way to look like a pro holding a DSLR. 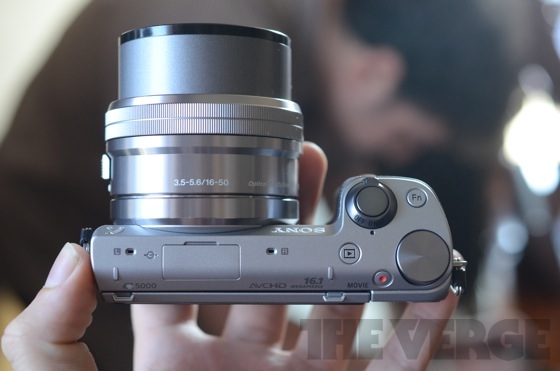 Sony's not ignoring the traditional NEX lineup, though: it's introduced the new NEX-5T, which is all about bells and whistles. The $699 camera isn't fundamentally that different from the NEX-5R, but it adds NFC: that allows one-touch connection between the NEX-5T and your smartphone or your computer. Given our past experience with Sony's camera Wi-Fi, that may not be a frequently-used feature, though we've liked the ability to use your phone as a remote viewfinder and shutter button. The 5T keeps the same sensor, same fast hybrid autofocus, and even most of the same fit and finish as the last model — but since it comes with Sony's new, smaller power zoom 16-50mm kit lens, it's a noticeably smaller footprint. We liked the NEX-5R, and though the 5T doesn't reinvent the wheel it's a nice upgrade.

Both cameras will be available in late September, along with three new E-mount lenses. They probably won't upstage the NEX-6 as our favorite of Sony's mirrorless cameras, but at far cheaper prices they probably don't need to.