Google Glass is in Vogue, but not yet in vogue

Share All sharing options for: Google Glass is in Vogue, but not yet in vogue

Aside from the occasional up-and-coming NBA star, most of the early Google Glass adopters are, unsurprisingly, developers and technology fans that aren't normally seen as denizens of style. Even before its release, the headset has become the poster child of refreshed privacy fears and the butt of many talkshow jokes. It's safe to say that Glass has an image problem. But with a 12-page spread in the iconic September issue of Vogue, Google is hoping to change the perception of its headset.

Not all publicity is good publicity

In the shoot, Glass is featured against a variety of retro-futuristic backdrops in a piece called "Google Glass and a Futuristic Vision of Fashion." It's not the first time Google has aligned itself with the fashion world to promote Glass — the company paired with designer Diane von Furstenberg to record a behind-the-scenes video from New York Fashion Week last year. But while continual promotion will obviously help Google to keep its headset in the public eye, Fast Company's Mark Wilson opines that a science-fiction-inspired photo shoot isn't likely to ingratiate the device to the masses. 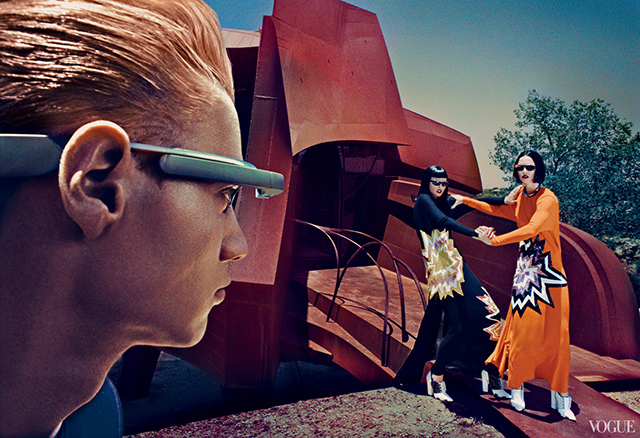 Rather than toeing the company line and portraying Glass as a friendly device that will improve your life, Vogue places Glass on emotionless models, set against the brutal architecture of Robert Bruno's Steel House. In one unnerving image, a Glass-less model lays unconscious on the floor while a pair of cyborg-like models watch on through their headsets. Not exactly in line with Google's desire for Glass to blend invisibly into our present-day lives.