The decline of serial killers and rise of the sharing economy

Share All sharing options for: The decline of serial killers and rise of the sharing economy

In San Francisco and Los Angeles, fleets of amateur taxi drivers have taken to the streets, using services like Lyft and Sidecar to find fares, ferrying total strangers around to earn extra cash. In New York City, despite legal concerns, there are thousands of apartments available on Airbnb, and many renters allow a never ending stream of visitors to book a spare bedroom for a few nights each week. Across the nation, TaskRabbits fill odd jobs — walking the dogs, carrying the groceries, and cleaning the bathrooms of people they don’t know very well at all.

Collectively these companies have raised over $200 million in funding to power what's known as the "sharing economy." But there was time not so long ago when the idea of interacting so freely with complete strangers would have made many Americans much more uncomfortable. "There was a cultural moment during the '70s and '80s where the dominant boogieman was the serial killer. This figure crystallized our worst fears, and walked among us," says Harold Schecter, a professor at Queens College and a true-crime writer.

A 2011 study, "Extreme Killing: Understanding Serial and Mass Murder," found that the number of serial killers in the United States began rising in the 1960s, peaked in the 1980s, and has been falling ever since. "There is definitely an intriguing connection between the decline of serial killers and the rise of this sharing culture," says Schecter, "These startups reflect how much our anxieties have eased." 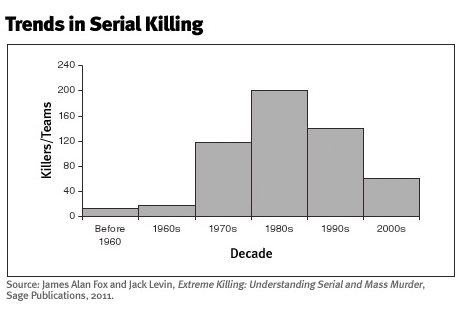 Even during their peak, serial killers were not numerous enough to be statistically significant in terms of personal safety. Their impact was more psychological. "Serial killers generate far more fear than their numbers justify," says Kirk Heilbrun, a professor at Drexel University. "It has an impact on the national consciousness, the question of whether or not you believe a stranger will do the right thing."

The result was that a very small number of criminals had an outsized impact on social behaviors, like hitchhiking, that require people to trust strangers. Gone were the days of Jack Kerouac and his pals sharing rides across the country. Drivers and hitchers both felt they couldn’t trust the other party, as a study from 2001 found. Guidebooks increasingly recommended against the practice and local laws often banned it entirely.

Do you believe a stranger will do the right thing?What role has the internet played in reversing this trend? Mike Aamodt, a psychology professor who has studied serial killers, says the web has created a new paradigm. "There is an identity layer that exists now which prevents predators from moving between communities and staying unnoticed as they did in decades past," he tells The Verge. "A Google search makes it more difficult to simply leave your history behind."

There have been a number of serial killers over the last decade who found their victims through Craigslist, as detailed in a recent feature for The Atlantic, but this is the exception that proves the rule: Craigslist is a Web 1.0 dinosaur that has stubbornly resisted the shift to a less anonymous, more social web. By contrast, services like Lyft ask users to sign in with Facebook. Brad Burnham, a partner a tech investor at Union Square Ventures, sees the growth of these networks and a renewed trust in strangers as a fundamental part of modern internet culture. As Burnham writes:

The Internet is not just a series of pipes. Its core architecture embeds an assumption about human nature. It assumes that if individuals are empowered, they will do the right thing the vast majority of the time. Services like eBay, Craigslist, Etsy and Airbnb are built on the assumption that most people are honest … All of these companies spend a lot of time and money to battle spam and fraud. The companies are simply betting that there are many more good people than bad.

There is another long-term trend at play here: the sustained and significant drop in the rate of violent crime across the nation over the past few decades. This is especially true in the metropolitan areas where the majority of the startups at the forefront of the sharing economy have taken root. The most dangerous precincts in New York City now report less violent crime than the safest areas did back in 1993. San Francisco’s murder rate has dropped to levels not seen since the 1960s.

"We have come to trust in the network."

This change has been accompanied by a return to living in cities. The flight to the suburbs that hollowed out many major urban areas in the 1970s and '80s has largely reversed. The techies who once clustered in suburban locales like Xerox PARC, the Research Triangle, and Bell Labs have now returned to cities and begun creating peer-to-peer apps and services that leverage these crowded, metropolitan centers.

"Once upon a time we trusted a hotel chain like Hilton. The brand made people feel safe spending the night there," says Burnham. "Increasingly we have less confidence in these established hierarchies. We have come to trust in the network, in the web of connections between people."