'Cerebral organoids' model development of the mind in human embryo

Scientists have long been taunted by the human brain. After all, the very organ that gives us knowledge remains largely unmastered — something President Obama has set to rectify, in part, with an ambitious effort to map the brain. An incredible new development brings us closer to understanding the human mind, however: researchers have successfully grown a "mini brain" in the lab. This lab-cultivated tissue represents the first time a three-dimensional mass with multiple, distinct brain regions has been created, and it could offer researchers an invaluable tool for working towards a cure for certain brain diseases.

So why make a brain in the lab? Knowledge of human functions is often based on animal studies, and the theories drawn from those experiments rarely map perfectly with the human body. Jürgen Knoblich, PhD, who led the team responsible for this new development, explains that "transferring the knowledge that we obtain from animal models to our ultimate goal of understanding human disease and the human body is one of the greatest challenges of modern biomedical research." Analysis of living human organs would make the entire process much easier, but there are obvious ethical concerns. Hence the drive to produce organs in the lab — a push that’s already led to functional, human-generated liver, heart, eye, and pituitary gland tissues grown in cultures. But as Dr. Knoblich told members of the press, "So far the most complex of all human organs, which is the human brain, has not been susceptible to [these methods]." 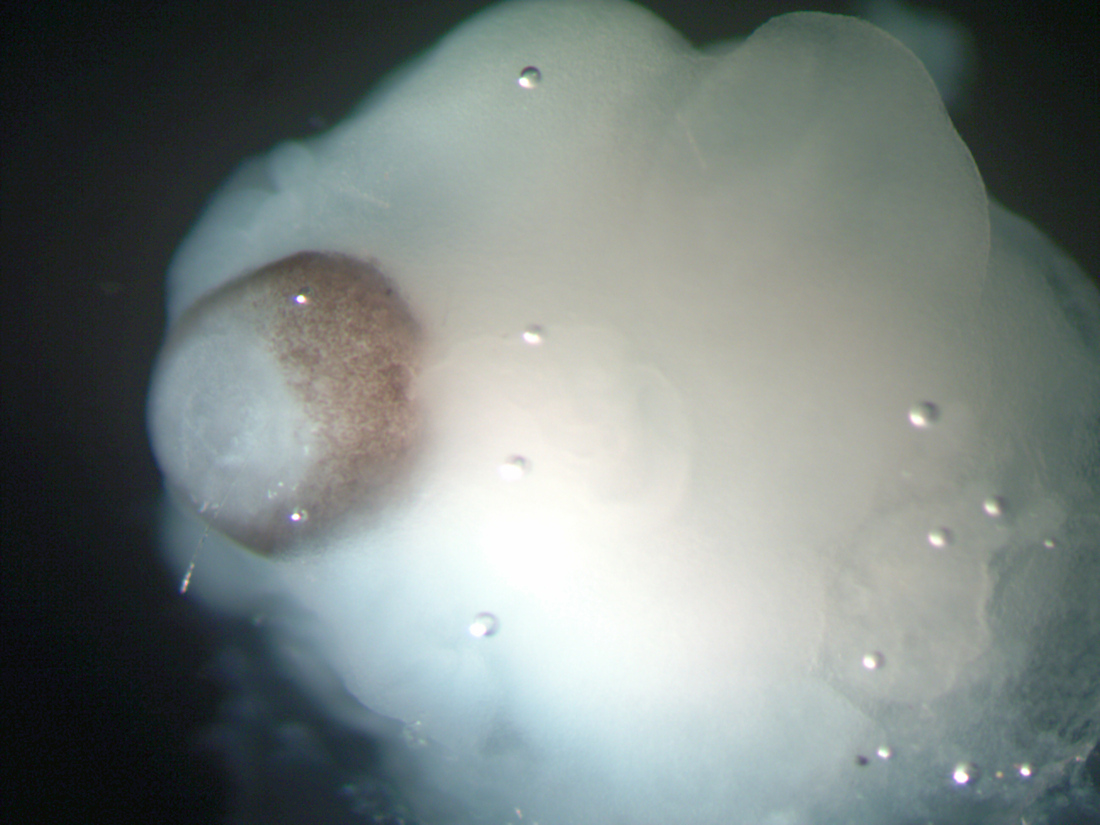 A closeup of an organoid with developing retinal tissue (brown).

The lab-made tissue announced today is known as a "mini-brain" for a reason. Researchers say that the "brains" — which they refer to as "cerebral organoids" — typically grew to no larger than 3 to 4 millimeters in diameter. But for the first nine weeks of development, the organoids "look very similar to the human embryo" and "display discrete regions that resemble different areas of the early developing human brain," says Madeline A. Lancaster, PhD, lead author on the paper outlining the research.

Specifically, the organoids grown in the lab have a dorsal cortex (the largest part of the brain), ventral forebrain, choroid plexus (which generates cerebrospinal fluid), midbrain and hindbrain (which form the brainstem), and even a retina. These regions developed on their own in cultures, and while they each resemble an immature human brain, they aren’t located in the right positions. Jürgen Knoblich likened the lab-grown organoid to a car with its engine on the roof and its transmission in the trunk — it doesn’t completely function or look like a human brain, but the individual parts are accurate.

"What our organoids are good for is to model development of the brain and to study anything that causes defect in the development."

To grow the brains, researchers took stem cells and placed them in a culture dish in which "most different types of embryonic conditions stop developing" and only those that lead to the creation of the central nervous system remain, says Lancaster. These tissues are then moved to a type of three-dimensional scaffold that spurs more complex development, before being transferred to a "spinning bioreactor" that "constantly agitates the medium and agitates the organoids inside to allow for better nutrient and oxygen exchange."

The method yields accurate brain samples — with active neurons that fire — for up to nine weeks. After that, the organoids develop differently than a human brain would. The researchers do have brains that have been growing for 10 to 12 months, but the bioreactor is no match for a true circulatory system. Since oxygen and nutrients can’t reach the interior of the brain as it grows, development is incorrect.

The spinning bioreactor used to mimic the environment of the human embryo and bring nutrients and oxygen to the "mini brain."

As such, what the organoids are good for is "to model development of the brain and to study anything that causes defect in the development," Knoblich explains. The team demonstrated this by studying microcephaly, a genetic brain disorder that causes reduced brain size and mental disability. By comparing the growth of a healthy lab-grown brain with one created using stem cells from a patient with the disease, researchers found that the latter formed neurons too early. They suspect that this developmental anomaly is central to the characteristic decreased brain size found in patients with microcephaly.

From here, the team hopes to model more diseases, like schizophrenia and autism, and believes it can use the system to analyze the specific functions of human genes in the brain. Knoblich also added that the organoids "offer the possibility to test drugs directly in a human setting and thereby avoid animal experiments and get more informed results that are more easily transferrable to cures in patients."

"The whole is not a brain."

But some of the more outlandish uses of this research will remain purely science fiction, for now. When asked about using such organoids to repair brain damage, Knoblich said "I have to be a bit pessimistic about this, because the ultimate complexity of the brain will not allow any replacement of structures." Additionally, he didn’t express interest in growing larger, more complex brains, explaining that we're extremely far away from human-generated brains that at all resemble a mature form with proper wiring and circulatory systems.