After years of neglect, Yahoo is restoring the prestige of Flickr's name

A funny thing happened this morning. Yahoo kicked out the latest update to its already pretty sweet Flickr for iPhone app and, in the process, ensnared me in its growing population of users. The most immediate new tweak in Flickr 2.20.1134 is the addition of live filters, allowing you to preview the post-processing effect before it's actually applied. This was a feature that Instagram used to have, and it's one that many of its users have missed since it was unceremoniously yanked away.

Flickr is now the go-to app for anyone looking for a big photography community and a full suite of filter options. The stock filters provided in the new app are an improvement on the old set, but Yahoo hasn't stopped there and has added customization options. You can now add and adjust effects like vignetting, tilt shift, and light blooms, which together let you finesse the style of each image.

But wait, there's more. After you've picked just the right amount of artificial bokeh and simulated degradation, you can put your iPhone photo through an extensive image editor. Pictures can be sharpened, straightened, cropped, flipped, rotated, and auto-enhanced. Then you can play around with sliders for the perfect exposure, white balance, saturation, and contrast. You can even tweak individual color levels.

Flickr's new iOS app wins by keeping all these options accessible without making them obtrusive. You can still blast out a quick picture with little effort — but should you wish to obsess over the finer details, the tools are now at your disposal for doing so. My previous favorite image tweaking app was Google's Snapseed, but that now feels inefficient compared to Flickr's quick and painless interface. And let's not forget, Snapseed plugs you into the Google+ social ecosystem whereas Flickr is the original home of photography buffs on the web. 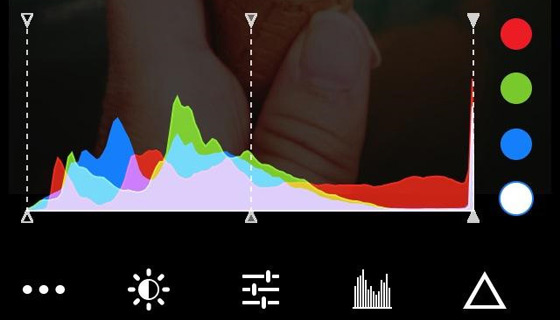 Yahoo's revival of the Flickr brand, after years of unforgivable neglect, has been a joy to watch. The web service finally looks like it was designed this century, while the mobile app is taking great strides toward becoming an all-in-one photography tool. The company's ambition to turn Flickr into more than just a picture sharing portal is also conveyed by its addition of pinch-to-zoom and a variety of creative composition grids to its camera interface. Exposure and focus locks are also available, leaving me wondering what else I could possibly want from my phone's camera software.

I'd be remiss not to acknowledge the widespread appreciation of VSCO Cam, whose image editing suite is similarly full-featured, but Flickr doesn't have to be the undisputed best app to be successful. It has a large built-in community that brings it closest to delivering the total package and It's simply a fun tool to use — both because it works seamlessly and because it represents a chance to root for the underdog.

Read next: The best photo apps for keeping your memories in the cloud