US has 'high confidence' Syria carried out chemical attack that left 1,429 dead (update)

US has 'high confidence' Syria carried out chemical attack that left 1,429 dead (update)

At least 1,429 Syrians were killed in a chemical attack allegedly carried out by the regime of Bashar al-Assad, according to new US figures. 426 children are included in that tally. Secretary of State John Kerry delivered the grim news in a press conference today, saying that United States intelligence agencies had "high confidence" that Assad was responsible for the ruthless offensive targeted at opposition forces and civilians. Kerry emphasized that officials had "reviewed and re-reviewed" thousands of pieces of evidence in reaching the conclusion, mindful of the mistakes made by the intelligence community leading up to the Iraq war. "We will not repeat that moment," Kerry promised. "It matters here if nothing is done," he said. "It matters if the world speaks out in condemnation, and nothing happens."

"What is the cost of doing nothing?"

"It is also important to discuss this directly with the American people. That's our responsibility," Kerry said, laying out several key facts uncovered by US intelligence in the days since the attack. "We saw rows of dead, lined up in burial shrouds, the white linen unstained by a single drop of blood," he said. "Read for yourselves the evidence from thousands of sources," Kerry said, referring to a newly released report on the incident. "We need to ask, 'What is the cost of doing nothing?'" Kerry stopped short of confirming military action against Syria, but his urgent tone made US intervention seem a near certainty. Still, he made sure to distinguish this situation from the invasions of Afghanistan and Iraq, pledging "no boots on the ground" in any assault. The US also released a visual map detailing the areas that were affected by the August 21st attack. 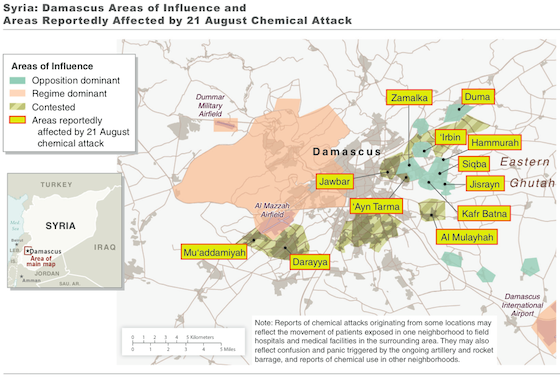 Syria President Bashar al-Assad and his regime are accused of having used chemical weaponry during an attack on civilians and opposition forces near the Damascus suburbs on August 21st. Hundreds of deaths resulted, and humanitarian aid group Doctors Without Borders said victims showed "neurotoxic symptoms" typically associated with a chemical strike. A United Nations inspection team dispatched has completed testing the area for evidence of chemical weapons, but it may be days or weeks before it can provide conclusive results.

"Fatigue does not absolve us of our responsibility."

Even with the knowledge that Assad may have gassed his own people, US citizens remain hesitant in supporting yet another hostile military engagement overseas. Polls show that President Obama currently lacks public support for any potential offensive. In an NBC poll, 80 percent of those surveyed would prefer the president gain Congressional approval for a strike rather than act by his own accord. Kerry addressed a war-weary public in his remarks. "We know that after a decade of conflict, the American people are tired of war. Believe me, I am too," he said. "But fatigue does not absolve us of our responsibility. Just longing for peace does not necessarily bring it about."

Kerry reiterated that any action the US takes will be "limited and tailored" in nature, but a potential military operation is growing more complex by the day. Reuters reports Assad's forces are hunkering down in schools and other residential areas that could increase civilian casualties. To further complicate matters, the United States also lost a traditional ally in the United Kingdom after British Parliament voted down Prime Minister David Cameron's pleas to join a potential US effort. "It’s clear to me that the British Parliament and the British people do not wish to see military action; I get that, and I will act accordingly," Cameron said following the result.

BREAKING: Obama says he has made no final decision on Syria, but is considering a "limited narrow act."

Update: President Obama hasn't yet made a final decision on a potential Syria attack, he told reporters this afternoon. But Obama has ruled out putting American troops on the ground. "We're not considering any open ended commitment," he said. Instead, Obama said any engagement would be a "limited narrow act." Obama shared Kerry's sense of urgency in his remarks, describing Syria's use of chemical weapons as "a challenge to the world."