Kyocera makes a lot of different products: knives, solar panels, smartphones, just to name a few. Not all of those are necessarily created equal though. Kyocera's ceramic kitchen knives seem to be pretty widely well received, while its cellphones, on the other hand, are usually fairly average devices that start out on smaller carriers like Sprint or Boost Mobile. But the company's latest, the Hydro Elite, debuted yesterday straight onto Verizon. It's $149.99 on contract — only $99.99 if you can remember to mail in a rebate — and has one pretty great (and increasingly popular) feature. For up to 30 minutes, it's waterproof when submerged in just over 3 feet (1 meter) of water. 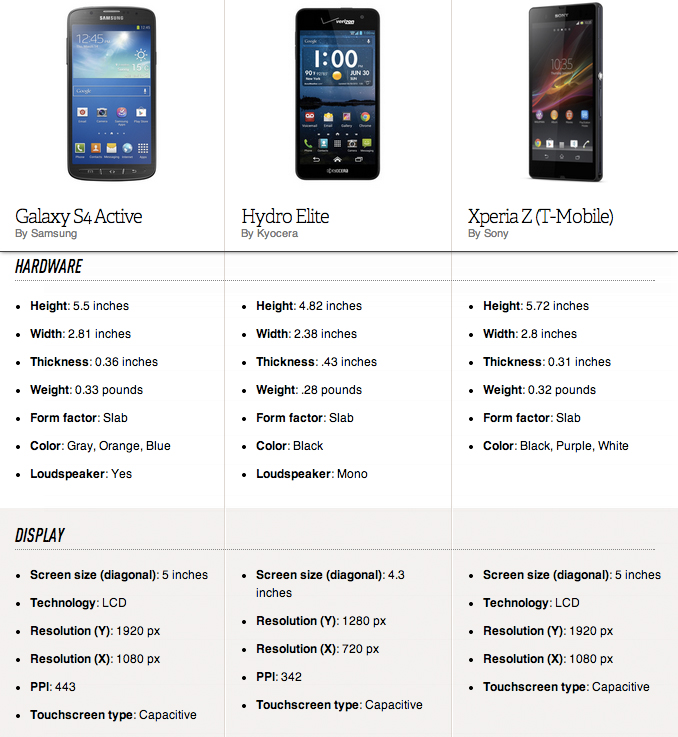 Waterproof phones are getting better and better

As we've been seeing lately, waterproof phones no longer have to be big, bulky, and carry usability tradeoffs just to get their price down. The Hydro Elite doesn't quite do that. It's a little on the thick side, at .43-inches, and bucks the Android trend of large screen sizes by going with a 4.3-inch display. It has a 720p resolution, and while that isn't bad at all with its smaller display size, it clocks in far short of the pixel density available on waterproof phones within just $50 of its price.

And those phones are pretty good ones: the Galaxy S4 Active is $199.99 on contract and hangs onto nearly everything that's great about the S4 proper, while the Xperia Z is even thinner and actually starts at just $99.99 (though that's on T-Mobile's pricing scheme — it actually about matches the full cost of the S4 Active).

The Hydro Elite doesn't fall massively behind them when it comes to specs, but it doesn't quite compare favorably either. It has a Snapdragon S4 processor, 1.5GB of RAM, and is only running Android 4.1 — software that's now one year and two versions out of date. That's surprisingly not all that far behind the Xperia Z, but the Z at least has an S4 Pro, which should handle intensive graphics considerably better. The Hydro Elite also has the lowest battery capacity of the bunch, but between its 720p display and older processor, it may actually be able to hold out for just as long.

There's one place where the Hydro Elite really does step up though: even though it's $149.99 on contract, it's just $349.99 off contract. That's not so bad considering that Verizon's other off contract offerings are highlighted by the Lumia 822 and the Droid RAZR M, but staying off contract has never been a great move for Verizon buyers unless they're looking to hang on to an unlimited data plan. Even so, Kyocera's latest is another instance of waterproof devices actually starting to look good, and the Hydro series certainly isn't a bad start.

There were a few cool additions to our database this week: