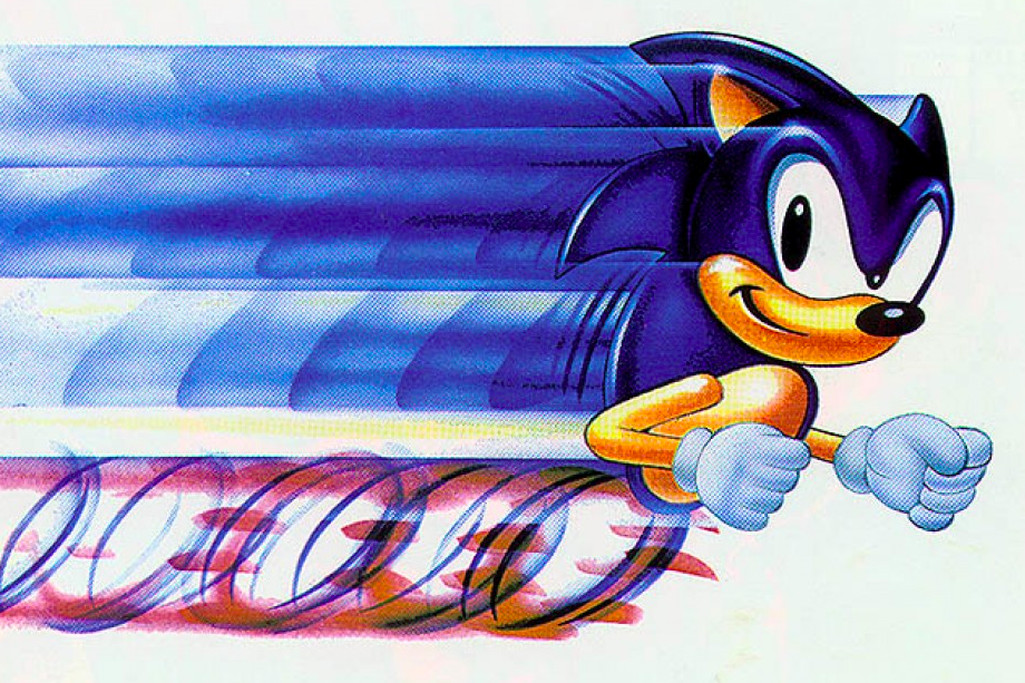 Every ride home from the video game store was a strange exercise in lust and this one was no different. I sat in the passenger seat and immersed myself in the sacred act of unwrapping and popping open the big black container shell, fondling the rounded cartridge in my hands as if the magic on the logic board inside could somehow be transdermally absorbed, internalizing the coarse alliteration of the box copy: Super Speed! Super Graphics! Super Attitude! It’s Super SONIC.

Like a jet engine warming up the choral two-toned SEGA brought my mind into gear but I still wasn’t prepared for what lay beyond the iconic finger-wagging title screen. Green Hill Zone, a platform landscape that should be designated a UNESCO World Heritage Site, was a new sort of virtual reality. It was all shimmering polygonal grass and innocently rotating rings and checkered brown underlayment twisting into impossibly navigable launchpads that showed off the primary achievement of Sonic Team: the raw thrill of unchecked speed.

All that speed, it turns out, required a new paradigm of gameplay, one that’s still the hallmark of every Sonic title. Only very general movements can be made when you’re moving at peak speed so much of the very fastest gameplay is predetermined; sort of a mini cut-scene in which the player can kick back and briefly enjoy objects screaming by.

Looking back on it today, that speed is purely nostalgic: games like F-Zero, Wipeout, and Saint’s Row continued to up the scroll-rate ante over the decades. But at the time Sonic’s pacing was exponentially quicker than anything we’d seen before. Like all truly innovative software Sonic The Hedgehog leveraged all 16 bits the Genesis’ advanced Motorola 68000 processor had to offer. To see what an 8-bit version would feel like, look no further than the Master System and Game Gear ports that focused more on exploration than speed because 8-bit words simply didn’t offer the computational expression needed for such a high scroll rate.

Speed wasn’t the only dimension that Sonic Team innovated in. The sheer quantity of movement on the screen was something that felt a little more alive than contemporaries like Altered Beast: rings twirl effortlessly in space and bounce out of Sonic in bursts of 20 when he takes damage; armies of innocent animals escape from their evil robot shells and scamper about the frame; bonus stages are a disorienting kaleidoscope of ever-changing barriers and emeralds. And who could forget the teenage petulance of our porcupine hero when left to his own devices: first an arrogant stare, then annoyed foot-tapping. These subtle movements, all products of the new processor, made Sonic the first game character with palpable attitude. He was the first sprite that fully exploited the expressive depth of his Central Processing Unit.

And then there was the sound.

Good film composers have known for a long time that music and noise play a much larger role than we give them credit for — audio is a more subtle medium than video, and one that had been neglected in ‘80s game design. While the 8-bit era left a long legacy of nostalgic composition it always felt like something that was tacked on at the end, a mere footnote to the quest at hand. As a 16-bit showcase Sonic The Hedgehog had to feel completely different — composer Masato Nakamura brought an unparalleled intensity to the soundtrack because he was able to compose with a polyphony and depth previously only associated with film. And, in a twist of fate that probably influenced a generation of electronic music fans, Nakamura had a distinct knack for bass grooves — if you haven’t done it lately, go back and try Marble Hill Zone with a subwoofer. Super sick.

Sixteen bits of compositional complexity lets the Green Hill Zone feel like the lush world it is, and accurately accentuates the emotional peak of completing a stage. Running out of air underwater actually feels like a life-threatening event and a bonus stage brings you to an airy, light-filled maze of joy. The twangy pu-wow of destroying an enemy, the deep thwomb of acquiring a shield, and the friendly ding-dong of touching a progress marker all form an expressive tapestry that brings you closer to a character’s world. Do you remember how amazing it felt to score a whole shitload of rings zooming through a corridor in a small amount of time? That’s due in large part to the fact that each shimmering tritone shing of ring collection was hard-panned left or right, alternating around you in space to psychedelic effect.

ONE SMALL STEP FOR A HEDGEHOG, ONE GIANT LEAP FOR KID-KIND

Sonic did as much as anything else in my developmental world to change the course of my life. Like millions of other pre-teens I had Sonic-themed birthday parties, Sonic faces drawn all over everything I owned, and I talked about little else with my third-grade peers. And when it’s cold out I still wear the blue spiked hat that I got at Sonic’s 20th birthday party in downtown Los Angeles, where I drank Curaçao-tinted cocktails and freaked out to a live rendition of Green Hill Theme on electric guitar by Masato Nakamura himself. And here I am, 20 years later, getting paid to wax nostalgic about a fast blue hedgehog.

All of our big dreams come from a simpler time in our lives. For those of us who grew up during the transition from 8 to 16 bits, each iteration was monumental: while Moore’s law has yielded diminishing returns in computing power in the 21st century, the ‘80s and ‘90s were years when a new generation of consoles meant a paradigm shift for the endless hours we spent shackled to our systems. While the multi-core networked power of the Xbox One and Playstation 4 usher in an Orwellian period of always-on surveillance, I wonder if any young gamers will experience the monumental adrenaline rush that I did when I finally defeated Dr. Robotnik in a blaze of glory at the end of Final Zone. I couldn’t share my achievement with my social media peers, but it would be all I could talk about at school for the next month, and it would cement the emotional engagement I have with technology forever. Sonic, it turned out, was a way of life.