Fruit should be eaten, not drunk

Share All sharing options for: Fruit should be eaten, not drunk

A study published by the BMJ this week affirms one piece of conventional wisdom — that eating fruit is highly beneficial to your health — while refuting another — that fruit juice is just as good as the unprocessed stuff. Analysing the dietary habits of 187,382 subjects over multiple decades, the research team concluded that "greater consumption of specific whole fruits ... was significantly associated with a lower risk of type 2 diabetes, whereas greater fruit juice consumption was associated with a higher risk."

A steady diet of whole fruit may help you avoid diabetes

Type 2 is the more prevalent kind of diabetes and, unlike type 1, can be actively prevented through a balanced diet. The new data from the BMJ identifies blueberries, grapes, apples, and pears as among the most significant reducers of diabetes risk, which echoes findings published in The American Journal of Clinical Nutrition last year. Where the new research goes further, however, is in looking at the effects of drinking fruit juice, which you might expect to be equivalent to eating whole fruit, but turns out to slightly increase your chances of developing diabetes.

In juicing the fruit's flesh away, you remove the dietary fiber and other nutrients that may be contained in the peel, while increasing the glycemic index by making its sugar easier to digest. Diabetes is a disorder of the body's ability to regulate blood glucose levels, which is why you might want to reconsider that glass of orange juice in the morning.

"Fruit juices lead to more rapid and larger changes in serum levels of glucose and insulin."

As usual with epidemiological studies of this kind, there are a number of limitations to the findings. The participants were self-reporting their fruit intake, some fruits (like apples and pears) were grouped together due to their nutritional similarities, and others weren't included at all. Consequently, the associations found can be considered informative, but the study's authors themselves point out that further research will be required to confirm their results and "to further elucidate underlying mechanisms." 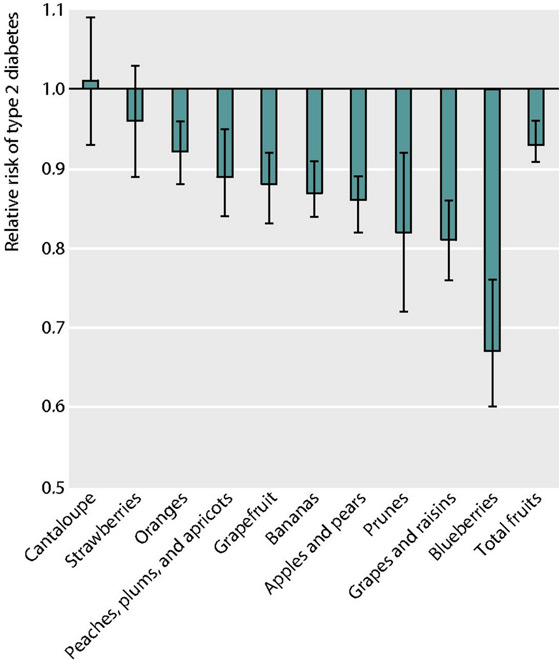