Apple is widely expected to announce the second generation of its iPad mini in the coming months — possibly as soon as September 10th — but LG's competitor in the 8-inch class is getting the spotlight first. The rumored G Pad 8.3 has been announced by the Korean electronics giant this evening, featuring what LG claims to be the first full HD display (1920 x 1200, to be exact) in a tablet of this size — though it conveniently ignores the new Nexus 7, presumably because it falls into the 7-inch class, not 8.

The G Pad 8.3 will have 16GB of internal storage, 2GB of RAM, and a Qualcomm Snapdragon 600 quad-core processor clocked at 1.7GHz. It runs Android 4.2.2 — not Android 4.3 — no doubt thanks to LG's software customizations that first debuted on the G2 smartphone. One unique feature to the G Pad is an app that LG calls "QPair," allowing users to pair to their smartphone and manage calls and messages directly from the tablet. Why a user would wish to take a call on the G Pad instead of their phone is unclear.

Pricing hasn't been announced yet, but LG says the G Pad 8.3 will be available in black and white across North America, Asia, and Europe in the fourth quarter of the year. The company had already promised to unveil its return to the Android tablet market at IFA 2013, so stay tuned for our first hands-on impressions from Berlin early next week. 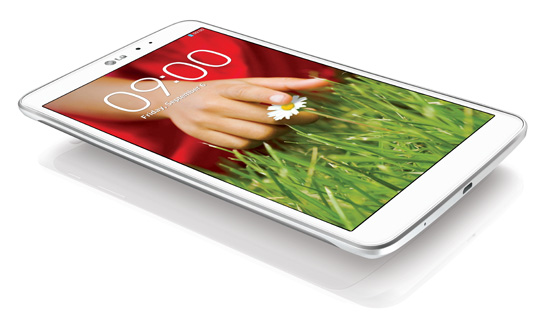