After spending the last several months rolling out Discover and Radio, two big pieces of its music discovery puzzle, Spotify is today introducing a critical third piece: Browse, a collection of the service's best playlists on iOS and Android. Whereas Discover and Radio are largely powered by algorithms, Browse introduces a human level of curation. The company is quick to admit that over one billion playlists have been created by users, and Browse is an effort to make sense of it all — a gallery of moods, moments, situations, and lists all represented in Spotify playlists.

Browse is an effort to make sense of Spotify's billion playlists

"Italian dinner," 'Dubstep Workout," and "Namaste" are among the 20,000 playlists Spotify has chosen as its favorites. "With over one billion playlists. chances are somebody has already made a playlist to suit your mood," says Charlie Hellman, Vice President of Product at Spotify. Aside from selecting top user creations, the company has made many playlists of its own, and is finally introducing top lists, new releases, and genre pages that make it easy to find the best rap and bluegrass music, or even the top tracks in the company's home country, Sweden. Browse was built in part by the members of Tunigo, a music recommendations app that Spotify acquired this past May. Tunigo was a lot like Songza, a popular service which offers radio stations for different moods and times of day, but built on top of Spotify's app platform.

Along with Browse, Spotify hinted at a revamped messaging platform launching next week that lets you go beyond simply sending an album or song to a friend. Messages, which will replace Spotify's archaic "Inbox," gathers all the music you've shared with friends into discrete conversations, so you can trace all the months of back-and-forth between you and your best friend or significant other. The feature looks like Facebook's web-based messaging platform, but with built-in Spotify music. You can also send text messages without attaching them to a song or album, which users will likely appreciate. Spotify isn't much of a social network (yet), but services like Last.fm have proven that hardcore music fans love striking up friendships based solely on similar music tastes, and Messages should help enable that. 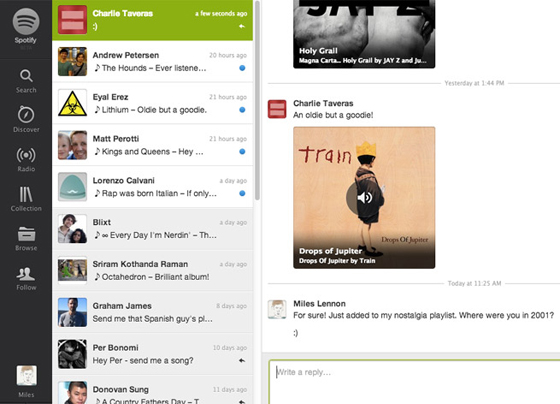 While Browse begins its life on iOS and Android, Messages will begin rolling out first inside Spotify's web player, and eventually make its way to mobile.