Researchers from the Netherlands unveiled a burger made entirely from lab-grown stem cells Monday, cooking and tasting the test tube meat at a media event in London. Dr. Mark Post, a professor at Maastricht University, heralded today's public tasting as an important step toward wide-scale adoption of synthetic meat — a transition that some see as a solution to looming environmental and agricultural crises.

The 5-ounce "cultured beef" burger was constructed from 20,000 protein strands grown from cow stem cells. The strands were compiled over the weekend and removed from a deep freezer on Monday. It cost $325,000 to produce, and was financed entirely by Google co-founder Sergey Brin. For Post, today's tasting marks the culmination of five years of research.

"we need to come up with an alternative, there's no question."

"I think people don't realize that current meat production is at its maximum, and it's not going to supply demand for the coming 40 years," Post said at today's event. "So we need to come up with an alternative, there's no question."

The burger was tasted by two volunteers — Hanni Rutzler, an Austrian researcher, and Josh Schonwald, a Chicago-based food writer. Both said that the burger felt authentic in some respects, though they noticed some peculiarities. Upon eating the burger, Hanni said it had a lot of "flavor" that was "close to meat," with a consistency she described as "perfect," though it was not "that juicy" because she knew the meat had no fat. Schonwald described the "texture, the mouthfeel" as "like meat," but also described what was "absent" as the fat of "conventional" burgers.

"I was expecting the texture to be more soft," Rutzler said, noting that the taste would have benefited from fat. "But there is quite a bit of flavor." (Post cited the development of synthetic fat as one of the "technical bottlenecks" he's currently facing.)

Post developed his "test tube burger" from muscle-repairing stem cells extracted from the shoulders of cows. When placed in a growth medium (calf serum), the cells differentiate into muscle fibers, and gradually begin to merge.

"The cells do the work on their own."

"The cells do the work on their own, we just provide the right conditions," Post told reporters Monday.

Post acknowledged that it will likely be "10 to 20 years" before cultured meat arrives on the market, citing high costs, low-volume production, and consumer apprehension as primary obstacles, though he remains confident that lab grown food could mitigate what many experts regard as an impending crisis. In a video released by Post's team, Brin said, "There are basically three things that can happen going forward. One is we will all become vegetarian -- I don't think that is really likely. The second is we ignore the issues, and that leads to continued environmental harm. And the third option is we do something new."

The world's population is expected to reach 9.6 billion by the year 2050, according to the latest projections from the United Nations. This growth is expected to put extra strain on global food supplies, and on meat, in particular. Worldwide demand for meat has increased dramatically in parallel with population levels, with consumption reaching 268 million tons in 2007 compared to just 70 million tons 50 years earlier. Demand is expected to increase with the growth of economic prosperity and middle class consumers in emerging markets like China and India.

Global crises loom on the horizon

Some estimate that food production will have to double over the next 50 years in order to feed the world's mushrooming population. But doing that through traditional agriculture will likely become more difficult due to climate change, widespread urbanization, and limited water supplies.

Post and others say artificial meat could offer a solution. A 2011 study from Oxford University found that synthetic meat would require just one percent of the land and four percent of the water that traditional livestock production currently uses. It would also present significant environmental benefits, the study found, reducing livestock-produced greenhouse gases by up to 96 percent, and using 45 percent less energy than conventional means. 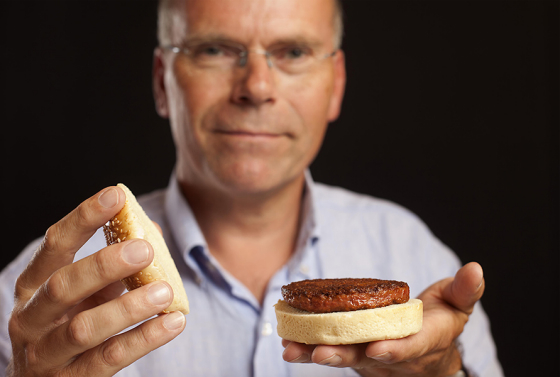 But critics note that Post's technique still relies on genetic materials that originate from animals, and it's not clear whether a purely synthetic solution is on the horizon. Because the myosatellite cells he uses cannot reproduce infinitely, Post's technique will always rely on a supply of cow tissue.

Other researchers are pursuing similar projects. Scientists from Utrecht University have been working to extract embryonic stem cells from pigs and cattle, while researchers at the University of Missouri are developing a stem cell that could be derived from adult cells and reproduce indefinitely.

Some animal rights groups have welcomed Post's work, lauding it as a more humane alternative to current systems. The People for the Ethical Treatment of Animals (PETA) has offered a $1 million reward to the first person to develop lab grown chicken, but others are taking a more cautious approach to the field, citing ethical and safety concerns.

Skeptics have already labeled it "Frankenburger"

The UK Vegetarian Society today said it is "officially interested" in the possibility of synthetic meat, though the organization said it needs more information about the animal materials used before condoning or condemning it. The UK National Farmer's Union struck a similarly skeptical tone, saying in a statement that it "remains to be convinced" that cultured beef and other artificial products are necessary.

Post acknowledged concerns over the safety of his burger, though he said there's no reason to assume that it would pose any risks, saying it would be possible to engineer the meat to be even safer than products currently on the market. He also stressed that the stem cells were extracted without inflicting pain or suffering upon the cows.

Marketing lab-produced meat to consumers will likely pose challenges — skeptics have already labeled it "Frankenburger" — though Post says people would warm up to the idea if they knew about the environmental benefits it offered.

"It's up to the people, but I think there are ways of marketing it effectively."