HTC's rumored 5.9-inch One variant appears to have been leaked by Taiwanese site ePrice. Rather than an upscaled One, the One Max looks more like HTC's One mini, which eschews the original's all-aluminum shell for a mix of plastic and aluminum casing. If ePrice's information is correct, the One Max will have the same resolution as the One, but stretched over a 5.9-inch display. It'll have a far larger battery to power that screen — 3,300 mAh versus the One's 2,300 mAh — and a more-powerful 2.3GHz Snapdragon 800 processor paired with 2GB of RAM.

According to the site, a dual-SIM variant of the device is currently being tested in China with a detachable rear cover to facilitate access to the SIM trays and a microSD card slot, but there's no telling if the single-SIM version will offer the same. The device photographed has 16GB of storage, but we've previously heard that HTC will offer up to 64GB of internal storage. 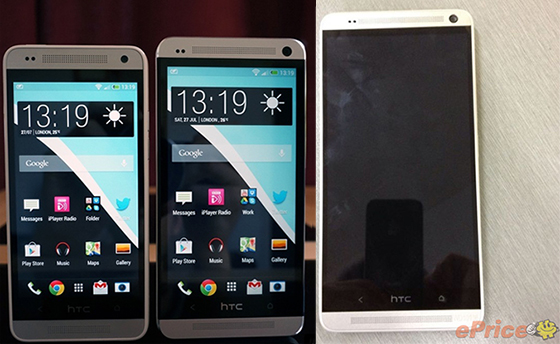 The HTC One Max alongside our image of the HTC One and HTC One mini. Its plastic and aluminum body has more in common with the mini than the One.

HTC's current lineup has been notably lacking a large-screen smartphone / tablet hybrid. A relatively new category, supermassive smartphones have become extremely popular. Samsung's Galaxy Note and Galaxy Note II are both among the top ten most-used Android devices in the world, and the Korean company is widely expected to launch the third iteration of its giant smartphone at the Berlin trade show IFA this September. HTC will reportedly announce its One Max at the very same show.

Update: Whoever first posted this picture has leaked another photo of the HTC One Max, this time more clearly demonstrating the large size of the smartphone. 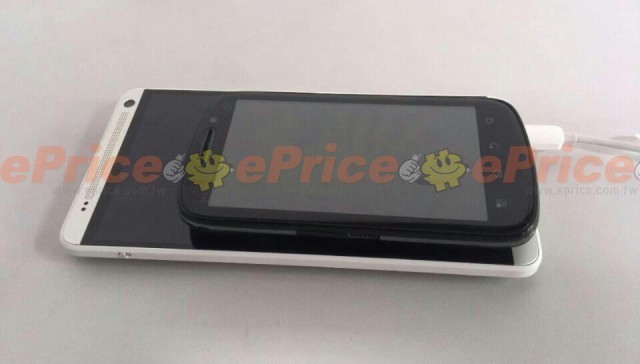