Almost half of US internet users over 65 use social networks, but only 5 percent use Twitter

Almost half of US internet users over 65 use social networks, but only 5 percent use Twitter

One of Pew's last studies may have found that teens were seeking refuge from "drama" on Twitter, but the social network still has a lot of catching up to do. In its latest poll, Pew asked around 1,900 American internet users whether they used social networks and, in a separate question, Twitter. While 72 percent said they did the former, only 18 percent reported using Twitter. Even so, that's a steady rise from 2010, when only 8 percent of internet users were on the platform. Social networks in general have grown as well: we've come a long way from the 8 percent using them in 2005, and 67 percent were on at least one network in late 2012, though the survey doesn't record how frequently they sign on. 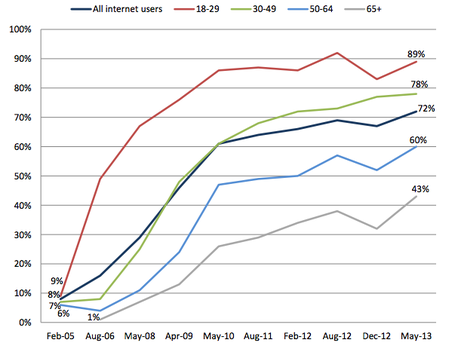 Likewise, despite real fears of a "digital divide" or speculation about social networks and class, the numbers were fairly even across income and education groups. People without a high school diploma were least likely to use social networks, at 67 percent; between 72 and 73 percent of everyone else said they had. Conversely, 75 percent of people in households that made less than $30,000 a year used social networks; between 71 and 74 percent of other income groups said they did. Twitter numbers showed more variation, generally rising with higher income and education.