Apple has spent much of the last year working hard to improve its iOS Maps product, an app that was severely flawed when it launched with iOS 6 last September. The company picked up a few new mapping companies earlier this year and has been hiring "ground truth" mapping experts around the globe, but now it looks like Apple will turn to its users to help more than ever before. According to Apple Insider, iOS 7 will ask users if they want to help improve the Maps app — those who opt in will have the street address associated with their Apple ID matched with the GPS coordinates of addresses saved to your "frequent locations" list.

Apple says this will help it "better approximate the geographic location of that address." Of course, Apple also says that all data it collects will be anonymized, and users will have to explicitly opt in to this program. Between this new data Apple will begin collecting, the new "ground truth" experts, its acquisitions, and a slew of new mapping hires the company is looking to make, the company is clearly hoping that Maps in iOS 7 can shake the bad reputation that came along with last year's release. 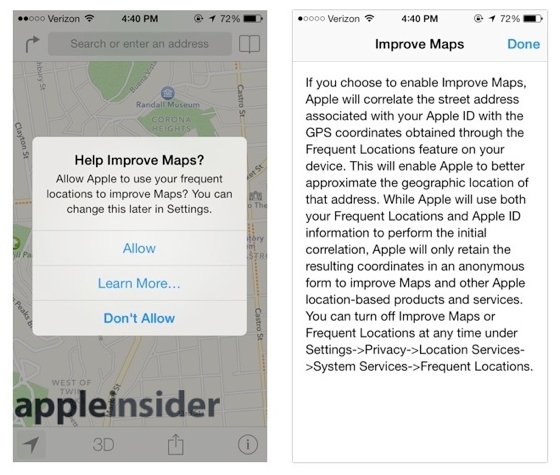