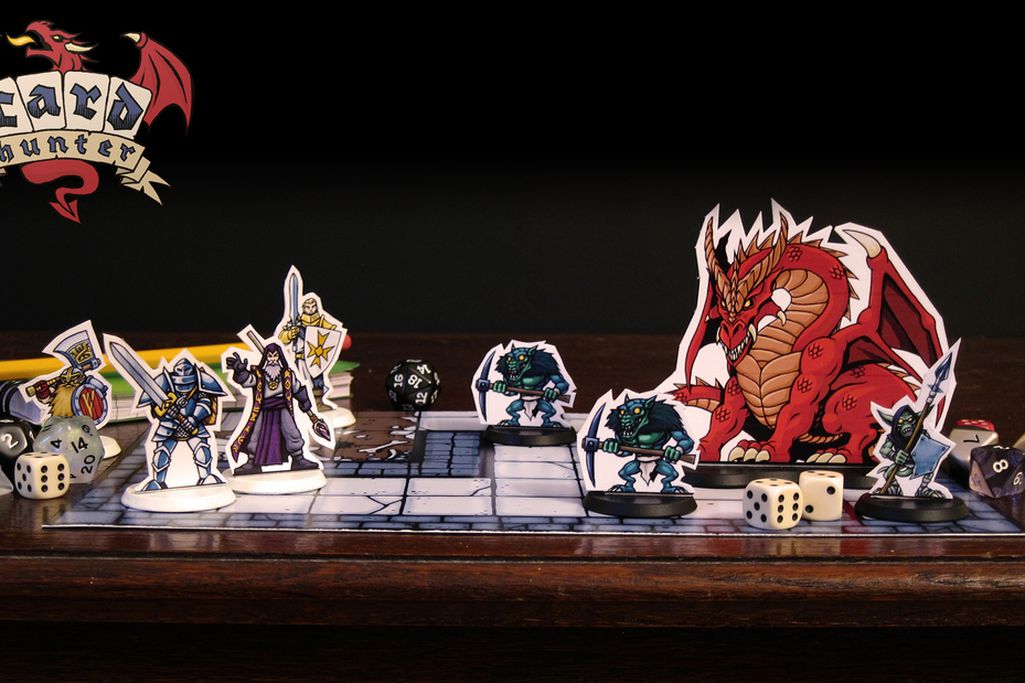 In the realm of nerdy board and card games, two names stand taller than the rest. Dungeons & Dragons has been the de facto pen-and-paper role playing game for decades, while Magic: The Gathering is easily the most well-known collectible card game in existence. They're pretty different games, but in spite of this the team at developer Blue Manchu Games decided to combine them into an experience you can play in a browser — and the crazy thing is that it works. Card Hunter is an addictive blend of Magic and D&D that manages to scratch a particular itch for anyone longing for the feel of a 12-sided die.

The basic setup will be familiar if you've played any RPG, whether it required a pen and some paper or included the words "final" and "fantasy." It's all about the journey. You manage a team of three would-be adventurers, traveling across a vast map, taking on quests, and battling monsters. Your characters will level up and become stronger, learn new abilities, and gain access to new weapons and armor. The trappings are familiar, but it's the way Card Hunter plays that makes it feel unique. 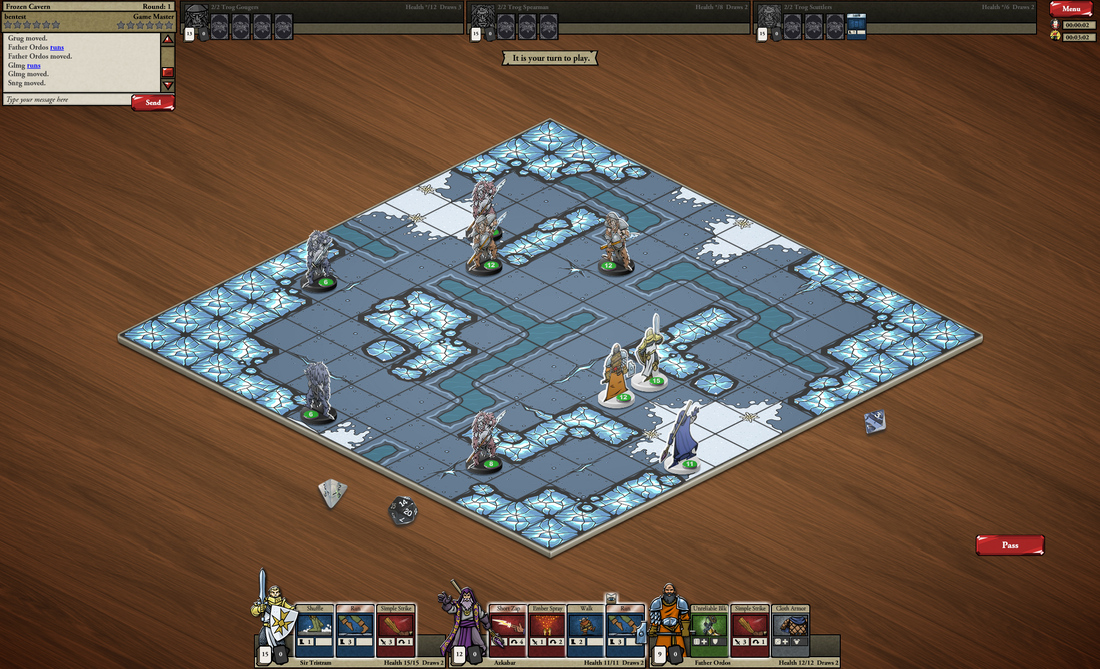 Much of your time, whether in the single-player campaign or in online multiplayer, will be spent in combat, which has you and your opponent taking turns exchanging blows much like in a standard video game RPG. You move your little warriors around a game board, and perform actions like swinging a sword or casting a healing spell using cards randomly drawn from a deck. What’s really unique, though, is how you build that deck.

Every weapon or piece of armor a character equips is associated with a handful of cards, essentially giving you a new set of actions by swapping gear. Better swords will give you better attacks, while that more expensive pair of boots can help your elf sneak around would-be attackers. Some items even carry a degree of risk: a big bulky club might provide both incredibly powerful attack cards as well as weak ones. Since your hands are drawn at random once you start a battle, you won't know which of those cards you’ll actually be able to use until they’re drawn. It really forces you to think about how you build your characters and, by association, your deck.

One of the in-game currencies is pizza slices

Turning a physical game into a digital one is an increasingly popular concept, as tablets and smartphones become the go-to places to get in a round of Carcassonne. "Physical board games are familiar to people and create a strong sense of 'this is a game' rather than an immersive or realistic impression of being in the situation," says Jonathan Chey, former co-founder of Bioshock developer Irrational Games, who's serving as both a designer and programmer on Card Hunter. "It might seem odd to try to re-create that feeling in a digital form, but I think it can give a more playful result. It makes a lot of sense to me for a fantasy genre, in particular, where taking the idea too seriously can be a bit ludicrous."

And Card Hunter certainly doesn’t take itself too seriously. It's a blend of two of the geekiest games around, and it revels in that. There's a whole meta-narrative that has you role-playing not as an adventurer, but as a kid sitting in a basement role playing as an adventurer. You'll be guided through the experience by a newbie dungeon master and there are plenty of visual touches to make it feel like you're playing a physical game — alongside the board and playing pieces, you'll see spiral bound notebooks and bowls of Cheezies in the background. One of the in-game currencies is pizza slices. It really makes you feel like a kid sitting around a table with your buddies, and the hilarious writing only heightens that.

While the team at Blue Manchu is made up of a number of experienced developers, including veterans of studios like Irrational, Looking Glass, and PopCap Games, they also enlisted some outside help when it came to designing the card game elements. Both Richard Garfield, who created Magic, and Skaff Elias, who served as a designer on the series, are serving as consultants on Card Hunter.

"Early on we knew we'd need some input from people who really understood the card game genre so it was very natural to reach out to Richard and Skaff for advice," says Chey. "Their feedback was invaluable in shaping the game. Perhaps the most important point they made to us was that we needed to speed up and simplify the core game mechanics in order to 'close the loop' around the game and deck-building cycle. Essentially, if your battles are taking too long, you de-emphasize the deck-building aspect of your game because players don't get enough chances to tweak their decks." 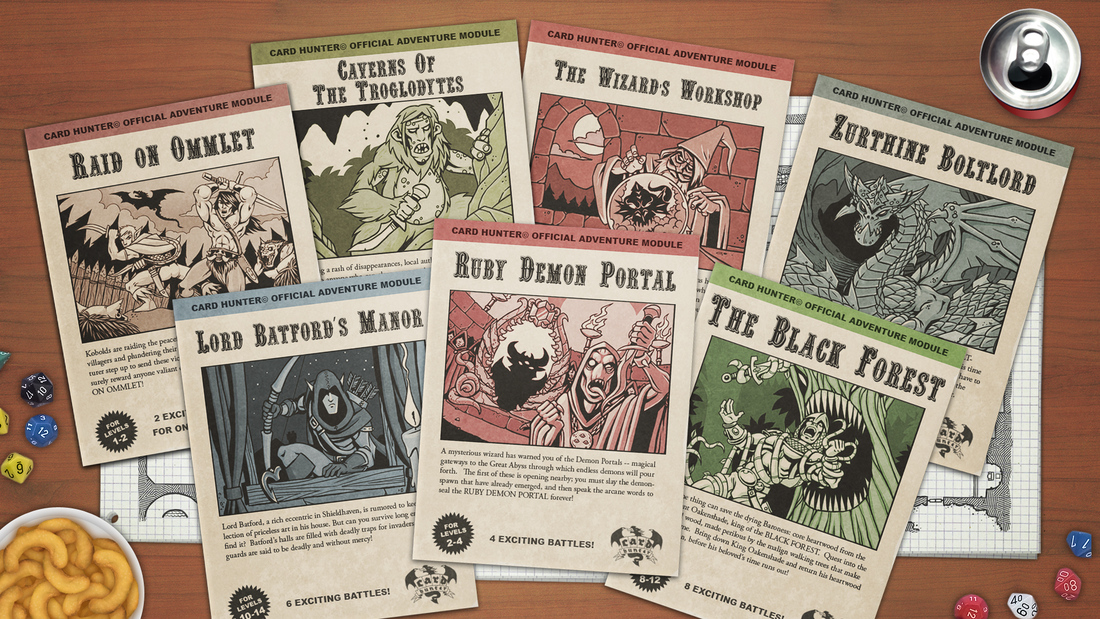 Thankfully the game is more than just a big dose of nostalgia. It's a robust and fun experience, though blending two different game types hasn’t exactly been simple. "In many ways, the two fit together remarkably well, but there are also cases where we were left scratching our heads trying to figure out how to smoosh them together," says Chey. "RPGs are very much about progression and increasing power, whereas card games really need to be about balance."

"I've watched an eight year old play the game, and I'm pretty sure she doesn't know a whole lot about Gary Gygax."

Among other things, this influenced the process of building the characters. In most RPGs your team will continually grow stronger over time, and you can focus on specific abilities to tailor them to your style of play. You can spend dozens of hours or more fine-tuning an adventurer, and the decisions you make are usually permanent. Whether it’s in D&D or Dark Souls, your character is arguably the most important part of the game. But because actions and abilities in Card Hunter are tied to cards, which are in turn tied to equipped items, you can completely revamp a character at any point by swapping their sword and shield. "That means that characters in our game are a bit less important than they are in a typical RPG," Chey says.

The result is a game that's been streamlined so that it's approachable, but still offers the depth fans of RPGs and CCGs crave. If you’ve been yearning for your days as a dungeon master, Card Hunter is a great way to satisfy that urge. However, the hope is that its free-to-play, browser-based nature will also make it easy for anyone to start playing Card Hunter, whether they grew up with D&D or not. "I've watched an eight-year-old play the game," says Chey, "and I'm pretty sure she doesn't know a whole lot about Gary Gygax… yet." The closed beta has been ongoing since January, the feedback so far has been good, and according to Chey the studio is nearing in on finally releasing the game to everyone. "[It's] really, really close now," he says.