How did milk turn from a toxin to a staple of the Western diet?

Share All sharing options for: How did milk turn from a toxin to a staple of the Western diet?

Lactose is a naturally occurring sugar you'll find in milk, while lactase is the enzyme that helps us digest it. The thing is, for most of our existence, the human species has only been able to produce lactase in the early years of life, rendering the consumption of milk during adulthood an untenable affair. Over on Nature, Andrew Curry describes how milk was essentially a toxin for early humans, and it was only through a fortuitous genetic mutation that some of us developed the ability to digest milk in the years after adolescence. 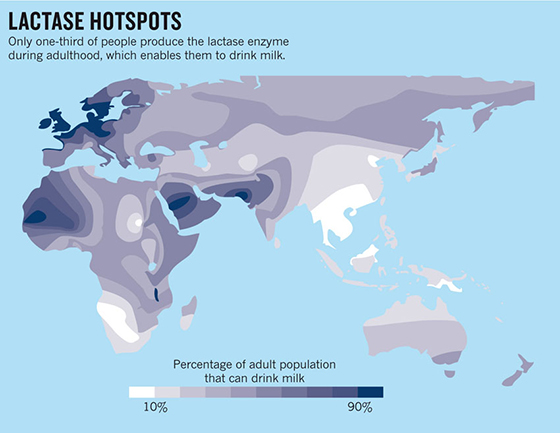 Humans had experimented with milk prior to that mutation, however, as evidenced by a number of archaeological discoveries that show we were making cheese as far back as 7,000 years ago. Even in those days, milk was instrumental in accelerating humanity's progression away from a hunter-gatherer lifestyle and toward a more regulated, farming-oriented method of subsistence. By virtue of its reduced lactose content, cheese was not only easier to consume, it also lasted longer — and could thus act as a substitute source of nourishment in the event of crop failure. The somewhat surprising conclusion is that milk, and the increasing human tolerance for it, may well have played a pivotal role in the development and progression of early European settlements.

Evolution works in mysterious waysOne thing's for sure, though lactose intolerance may sound like a disorder, it's actually been the natural state of adult humans for longer than not. So the next time you tuck into a bowl of cereal doused in dairy, remember why it is you're able to do so.