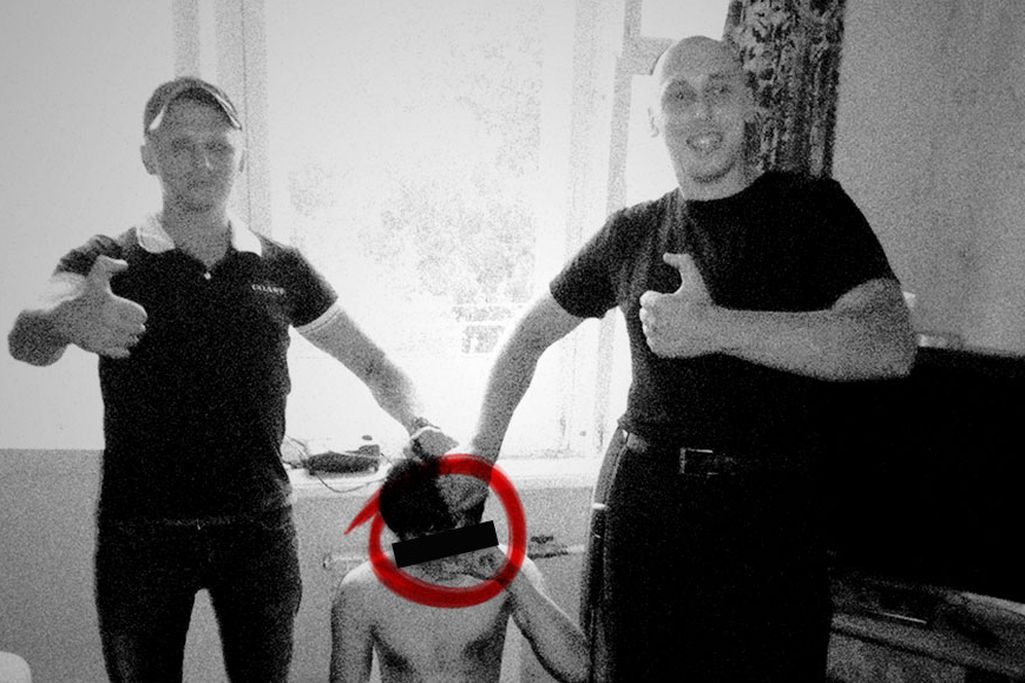 Last year, a teenager named "Alexei" (not his real name) was aimlessly surfing the web from his home in Moscow when he came across a curious collection of YouTube videos. Each clip featured different people, but they all followed the same basic script: a middle-aged man enters the scene expecting to have sex with a teenage boy he met on a dating website. Instead, he’s greeted by a group of young Russians who proceed to lecture, humiliate, and abuse him.

The videos can be difficult to watch, but for Alexei, they were fascinating. "It’s entertainment to me," the 20-year-old said in an interview with The Verge. "It’s about seeing the emotions."

"It's entertainment to me. It's about seeing the emotions."

Alexei has never been directly involved with any of the videos, though he supports the people who produce them — a loose collective of neo-Nazis and Russian nationalists known as "Occupy Pedofilyay" (Occupy Pedophilia). Both Occupy Pedofilyay and its smaller sister movement, "Occupy Gerontilyaj" (Occupy Gerontophilia), have garnered a substantial following on Russian social media over the past year, spawning hundreds of fan pages and dedicated satellite groups on VKontakte (VK) — Russia’s Facebook equivalent. Both are modeled on the same form of vigilante justice, and they target different sides of the same coin; Occupy Pedofilyay aims to catch pedophiles, while Gerontilyaj focuses on teenage boys who agree to have sex with older men, allegedly in exchange for money. Neither movement is explicitly anti-gay, though there are strong undercurrents of homophobia to each; thus far, only gay men and boys have been targeted.

People who belong to these groups say they serve a greater good by publicly humiliating alleged pedophiles, based on the pretext that their videos will deter others from engaging in similar behavior: pursue sex with a boy, and the entire world will watch you drink urine on camera. But opponents describe their tactics as crude, violent, and reckless. And in light of President Vladimir Putin’s recent crackdown on gay rights, some worry that the movements will only gain momentum going forward — fanning the flames of hate and bigotry as the Kremlin looks to shore up support among its conservative base.

"Being outed in a small city or village in Russia very often means death," says Larry Poltavtsev of the Spectrum Human Rights Alliance, a Washington, DC-based advocacy group for gay rights in Eastern Europe. "Exposed teenagers may commit suicide, or they’ll be harassed by your peers, their parents may kick them out of their house. It’s a nightmare."

Late last month, Poltavtsev published a disturbing video of a 15-year-old boy being interrogated by an Occupy Gerontilyaj contingent. For 20 minutes, the group of teenagers mock and lecture the boy, forcing him to admit that he came there to prostitute himself and making him repeat his full name on camera. They chastise him not only for agreeing to have sex for money, but for claiming to be bisexual, as well. The entire scene is framed like a mean-spirited intervention, as the teens urge the boy to change his ways while simultaneously hurling insults at him. The video comes to an abrupt end once the gang begins kicking him, after having already doused his head in what they claim to be urine. ("This will cure you of homosexuality," one says.)

"Being outed in a small city or village in Russia very often means death." 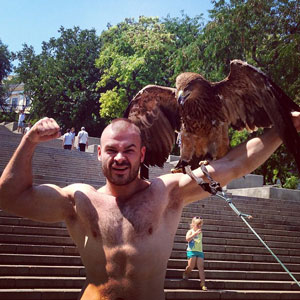 At one point in the video, the teens force the boy to praise Maxim "Slasher" Martsinkevich — a 29-year-old former skinhead who created the Occupy Pedofilyay movement in 2012. Musclebound and mohawked, Martsinkevich recently served a three-and-a-half year prison sentence for staging and filming a fake execution of a Central Asian drug dealer in 2009. In the video, he and his neo-Nazi cohorts were shown dressed in Ku Klux Klan robes as they pretended to hang and dismember the purported drug dealer. A Russian court found him guilty of provoking ethnic hate crimes. 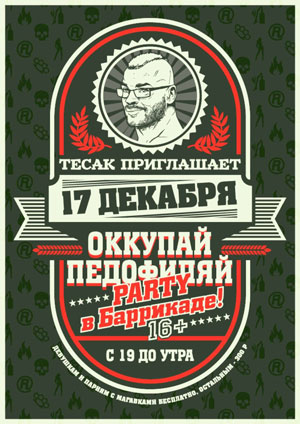 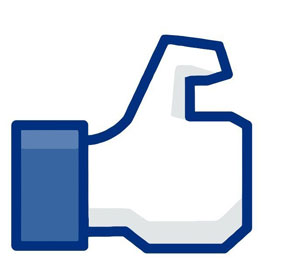 Upon his release, Martsinkevich created Restrukt ("Restructuring") — a vaguely defined "social movement" with distinctly nationalist overtones. Its manifesto calls for the creation of a "fundamentally new union of Russian people," in the hopes of reversing the country’s "degradation."

The group is strictly anti-drug and alcohol, and places a curious emphasis on exercise and bodybuilding. Martsinkevich regularly posts bare-chested pictures of himself on VK and Instagram, and promotes himself as a sports nutritionist and fitness guru. Swastikas and protein powder figure prominently in his online persona, and many of his followers describe him as a sort of moral leader.

Restrukt representatives insist that Martsinkevich is no longer personally involved in politics, though the organization allies itself with Russia’s National-Socialist Party — a neo-Nazi group that garnered international notoriety in 2007, when it decapitated an ethnic minority on video. Prior to his arrest, Martsinkevich led Format18, a neo-Nazi collective that spread anti-immigrant vitriol and violent videos across the web.

Anzhey Kmitits, one of Martsinkevich’s "comrades" at Restrukt, says the organization has grown rapidly in recent months. He claims to have established 10 regional offices across Russia, estimating that there are more than 500 activists currently engaged in its ongoing "social projects" — including Occupy Pedofilyay.

"Pedophilia, in our understanding, is an important indicator of the state of society — its flaws and weaknesses," Kmitits said in a translated VK message to The Verge. "We strive to help the public become better and stronger, to assume some of the functions of the state, which itself is neither willing nor able to deal with such problems."

There are hundreds of active VK groups devoted to Occupy Pedofilyay or Gerontifilyay. The largest has more than 75,000 followers, and 20 other groups have more than 1,000. Their common symbol is a bent thumbs-up sign, modeled after the Facebook "like" icon, though Kmitis says it has no special significance.

Martsinkevich’s well-manicured persona has inspired a legion of young cult followers to follow in his footsteps. Occupy Gerontifilyay was started in 2012 by Philip Dyonits, a 16-year-old Slasher protege who used to lure alleged pedophiles with fake dating profiles before breaking off to launch his own group. 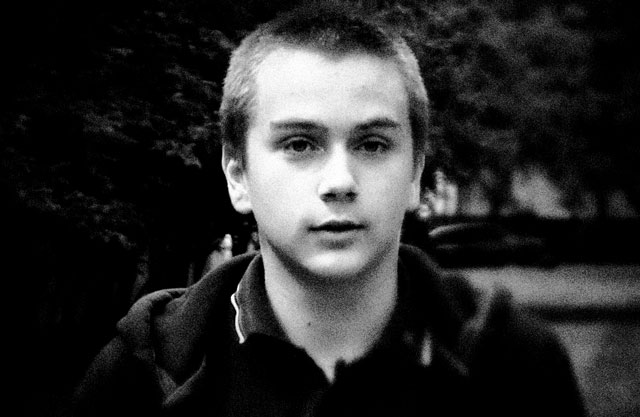 Occupy Peodfilyay’s regional affiliate groups are guided by Martsinkevich’s basic ideology — he regularly publishes stylized videos and holds regional seminars — though they operate in different ways. Some clearly resort to physical violence during sting operations (or "safaris," as they’re called) while others take a more hands-off approach. Dmitry Mikolenko, founder of the Occupy Pedofilyay movement in Kiev, Ukraine, says he doesn’t think violence is "meaningful," adding that moral abuse is more effective than physical aggression. He acknowledges, however, that his group frequently douses its "live bait" with urine.

The groups also differ in their respective philosophies on law enforcement. Mikolenko says he has no intention of cooperating with local police, alleging that authorities in Kiev are intent on "protecting pedophiles." But Kmitits and others say they’re on good terms with the police, with some claiming that they closely coordinate their operations.

"They know us," says Alexander Mikheev, leader of the Occupy Pedofilyay movement in the Russian city of Irkutsk. "We work closely with them, and if we have solid evidence, we call the police and give [the suspect] over."

The extent to which Martsinkevich dictates Occupy Pedofilyay’s agenda remains unclear. Kmitits says his colleague is in charge of the movement’s Moscow headquarters, and that the various satellite branches are "semi-autonomous." It is clear, though, that his persona and notoriety have garnered a broader cult following. Both Mikheev and Mikolenko say they’ve never met Martsinkevich in person, and started their respective branches after learning of the movement online.

Some VK users are calling upon the police to arrest Occupy’s leaders, on the grounds that their intimidation and physical aggression violate Russian law. Karina Frangulyan started an anti-Occupy Gerontifilyay group on VK last month, in the hopes of bringing down a movement that, as she says, regularly "tramples on human dignity." Frangulyan has collected around 15 videos from Occupy Gerontifilyay and is hoping to present them as evidence against its leaders, though she says that police have ignored many previous complaints. As of August 3rd, Frangulyan’s group had nearly 900 members, while two similar pages had close to 1,000, in total.

Although Frangulyan and her peers are explicitly targeting Occupy Gerontifilyay, they find its larger sister movement equally despicable, and have filed complaints against both to VK moderators. In an email statement to The Verge, a VK spokesperson says the site has shut down all groups related to Occupy Gerontifilyay, in addition to several Occupy Pedofilyay pages that were found to contain "insults, incitements to violence, or spam." It appears that VK has indeed shuttered all of Occupy Gerontifilyay’s pages, though critics say the site hasn’t gone far enough, pointing to the slew of safari videos, images, and Occupy Pedofilyay groups that remain online. 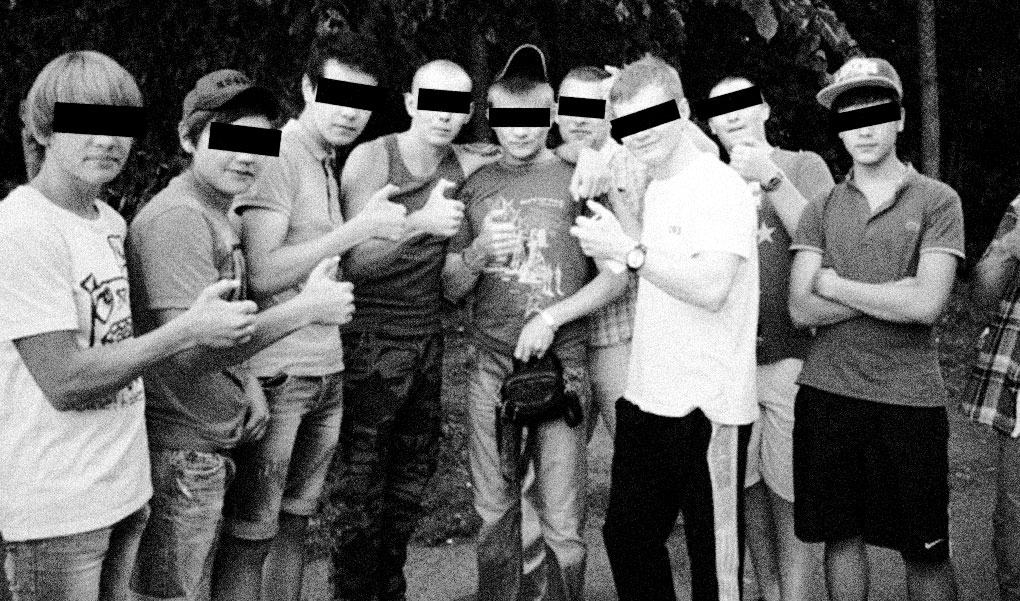 To gay rights advocates, VK’s tacit tolerance of Occupy Pedofilyay is simply a reflection of larger and far more worrisome political trends. In June, Putin signed a controversial law that makes it a crime to disseminate any propaganda that labels gay and heterosexual relationships as “socially equivalent.” The idea, the Kremlin claims, is to prevent minors from growing up with a “distorted understanding” of sexual relations, though the laws have been met with widespread condemnation, with critics saying they provide implicit justification for Martsinkevich and others to attack gays.

“If you create an environment where people think certain others are un-Russian or immoral, then some people will take measures into their own hands and attack them,” says Dmitry Gorenburg, senior analyst at CNA, a nonprofit think tank, and an expert on Russian ethnic politics.

Gorenburg and others say Putin’s gay crackdown is more about politics than morality. The 2012 protests — in which thousands of demonstrators demanded Putin’s resignation and accused his party of election rigging — spurred the president to pander to his more conservative base. 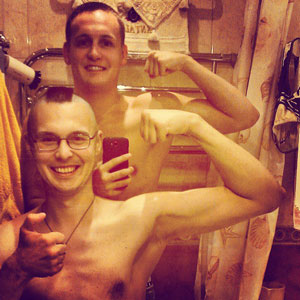 “When he was initially president the first eight years, he tried to avoid having an ideology — he wanted to be a president for everybody,” Gorenburg says. “And now, after the protests, he’s in a position where he realizes that some people are just sick of him. So he needs something more, and what he’s come up with is this very patriotic, anti-Western agenda.”

Many have blamed Putin’s political posturing for a recent spate of homophobic violence. In May, a gay man was burned to death in the southern city of Volgograd after his assailants sodomized him with empty beer bottles. Weeks later, three men killed a gay man in a village on Russia’s eastern coast, stabbing and trampling him to death.

When asked about their stance on homosexuals, Occupy Pedofilyay followers were quick to note that pedophiles are their sole concern, though the movement’s anti-gay overtones are impossible to ignore. The fake personas used to lure targets are exclusively male, and their safari videos are rife with homophobic slurs.

This kind of rhetoric, coupled with the Kremlin’s explicitly discriminatory stance, has left gay rights activists fearing the worst. VK’s largely hands-off approach has allowed the movement to flourish online, and in the absence of police intervention, critics worry that Occupy’s safaris may only intensify going forward. Martsinkevich, meanwhile, has shown no signs of backing down, and seems intent on pursuing his aggressive anti-gay agenda.

"It'll be the first, and the last time gays try to have their parade in russia."

"They can have their parade if they want to, but on that day there won't be a single policeman on the streets of Moscow," he said in an impassioned appeal to Russian police earlier this year, amid debates over whether to allow a gay pride parade.

"It'll be the first, and the last time gays will try to have their parade in Russia."

An earlier version of this article included an inaccurate translation of Maxim Martsinkevich's video address. It has been corrected.