LG's G2 takes on the Galaxy S4 spec for spec, and feature for feature (hands-on)

LG's G2 takes on the Galaxy S4 spec for spec, and feature for feature (hands-on)

A superphone by another name

After Samsung announced the Galaxy S4, its futuristic slab of a smartphone, it was only a matter of time until LG countered. Today, at a jazz hall in New York City, LG dealt its hand in the form of the new G2, and not surprisingly itâs a lot like the other phone shipping from Korea this year.

The first thing you notice about the G2 is that thereâs almost no bezel on the sides of the phone â more than any device Iâve seen, the 5.2-inch, 1080p screen really does appear to go edge to edge. Apparently the problem has always been touchscreens; there just has to be room for the wires that go from the touchscreen to the receiver that reacts to them. LG split the receiver, implementing one above the screen and one below, so there are half the wires in any given place â that means half the bezel, and it means the G2 feels about the same in your hand as the GS4 despite having a slightly larger display.

The hardware is otherwise very much like the GS4, with a plasticky back and thin rounded edges. The edges are empty, though, because all the G2âs buttons are located on the back of the device. Below the camera lens, the power button sits in between two volume keys. Itâs odd, but it works; the buttonâs right where my finger naturally goes when I pick the phone up, and it makes the G2 friendly to one-handed use in either hand. If itâs on a table and you canât reach? Just tap twice on the black screen, and it turns on.

The G2âs real story isnât its hardware. LGâs just hoping itâs good enough that you wonât notice it, and that its internals are good enough to power the massive laundry list of software features baked into the device. (Given that the G2 is powered by a Snapdragon 800 processor and 2GB of RAM, itâs probably good enough.) From pervasive customization to a nearly overwhelming list of apps and widgets, the G2 turns the Android experience into something completely different. Once again, it all sounds very familiar.

The 13-megapixel camera comes with a litany of shooting modes and options. Its Dual Camera mode lets you shoot one picture with both front and rear camera, and the wild VR Panorama mode guides you through a series of shots and then displays them like an interactive, Google Street View-esque panorama. The camera appears to take decent pictures, though itâs hard to say for sure based on such a limited interaction with the device â shots were a bit blurry in poor lighting, but the app is fast and photos seemed to look good. 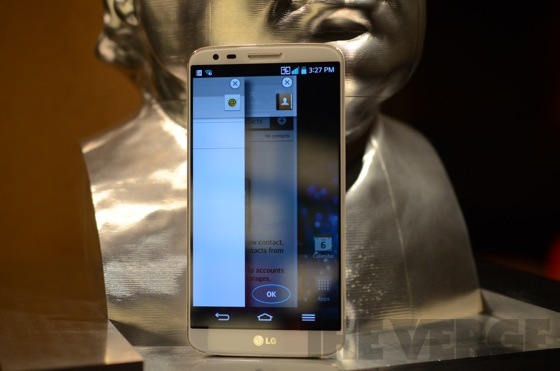 The cameraâs just the beginning of what LG has added to the Android experience on the G2. Thereâs the usual ugly aesthetic overhaul of Androidâs menus and buttons, plus a few new ways to interact with the operating system. One I particularly like is a three-finger swipe from right to left, which stores up to three apps off to the side of the screen â swipe left to right with those same three fingers, and you get quick access to your favorite apps. Itâs like a second multitasking tray, for only the few apps you use most. You can also really multitask, using the QSlide apps; they let you pop up a notepad, calculator, or video over top of whatever youâre doing, so you can read a recipe and take notes on it all at once. Or, you can use Quick Memo to grab a screenshot of the recipe and write it all down that way.

Everything happens quickly and smoothly â LGâs skin may be overbearing, but itâs not slow. Whether we were sharing VR panoramas via NFC, or poking through the IR-capable universal remote app, the phone kept up briskly.

You can change just about everything about the G2's software

When we asked LG how users are going to learn all of these features, and how theyâre supposed to figure out which ones to use and when, the answer was simple: "They can do it however they want!" Thatâs a theme with the G2, maybe the most out-of-the-box customizable phone Iâve ever seen. You can change the icons for any app you wish, to anything you wish; you can even change the on-screen navigation buttons, flipping the order or even adding a fourth key to the row.

You can add a Guest Mode to the phone, just by setting a different pattern lock; unlock it one way to access everything, and another to just give your friend a browser and a phone to use. You can choose which of the many icons, toolbars, and toggles appear in the notification pulldown (choosing all of them is a little overwhelming), and which are even enabled at all. Itâs the exact opposite approach of a phone like the Moto X; instead of only offering the features it thinks everyone needs, LGâs offering every feature anyone could possibly think of, and letting users pick for themselves.

Fighting the GS4 with... basically a GS4

If it all sounds a lot like the feature soup of the Galaxy S4, well, it is. And that might make it hard for the G2 to be competitive, even as it completes one of LGâs biggest rollouts ever â the phone will be available on all four major US carriers and around the globe, though the company was reticent to offer details about timing and price. Samsung has the marketing prowess and brand cachet that LG simply doesnât. Even though at first glance the G2 seems to be offer slightly better hardware than the Galaxy S4, it feels like LG is trying to confuse users into thinking a G2 is a GS4 rather than trying to do something truly different and better.

Editor markup for LG G2 hands-on pictures. This is only visible in the story editor.
Most Popular
From our sponsor
Advertiser Content From