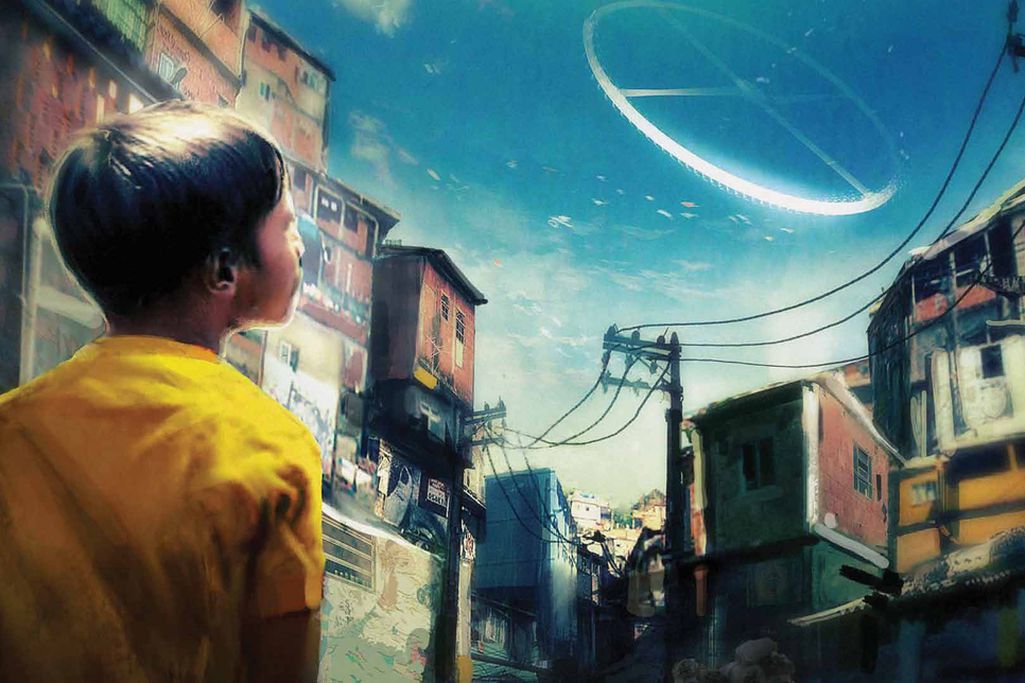 Director Neill Blomkamp's first feature film, District 9, was a vision of Johannesburg beset with alien-filled slums. It was science fiction that felt plausible — the aliens had to deal with xenophobia and bureaucracy, and their weapons and ships looked dirty and rundown. For his follow-up Elysium, Blomkamp looked to build a similarly deep and realistic sci-fi setting, only this time based in Los Angeles. "My largest personal goal making this film was to try and frame a vision of the future for the audience, and to do that with a world that felt as real and multi-layered as possible," he writes in the foreword for Elysium: The Art of the Film. "The only way that can be accomplished is with a shitload of conceptual design and visual ideas." All told, more than 3,000 pieces of art were created in order to build that vision.

Elysium takes place 140 years in the future, when the planet has been divided into two very distinct social classes: those who live in the gleaming space habitat Elysium, and the rest of us stuck back in the slums of Earth. Early on, creating that world involved lots of sketches, which Blomkamp gathered into a detailed graphic novel that covered everything from characters and locations to weapons and vehicles. That book became a tool that helped him sell lead actor Matt Damon and others on the project. "Neill's an accomplished designer in his own right and often had very specific ideas on how things should look," says Aaron Beck, a Weta Workshop concept artist who worked on the film. "So he had great concise feedback when necessary.” 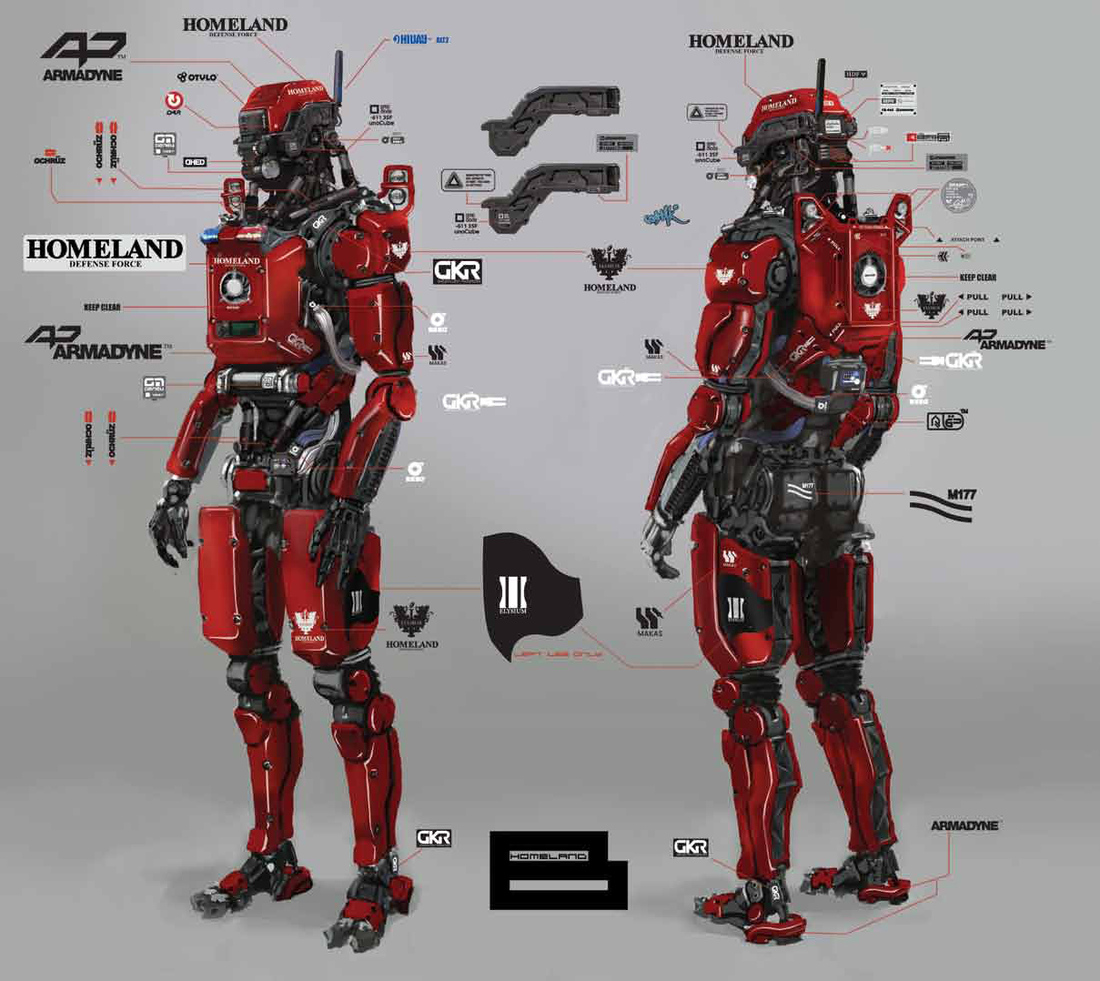 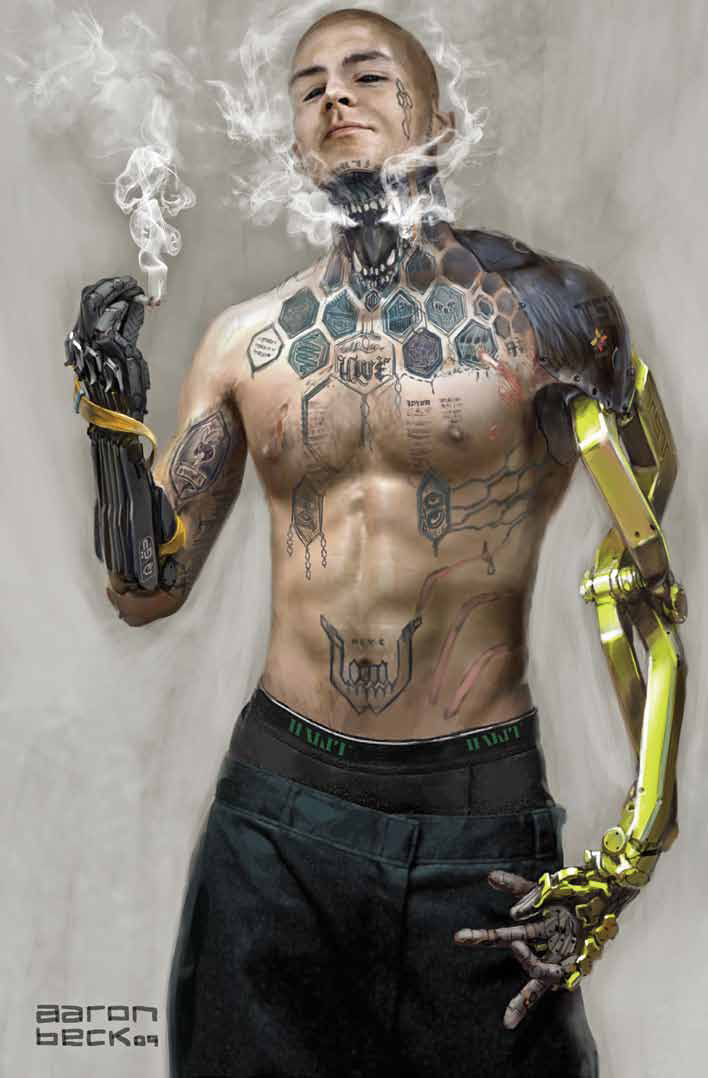 From graffiti to tattoos

The film’s two distinct locations led to two distinct looks. Los Angeles is dark and gritty — much of the film was shot in Mexico City, which stood in for LA — and filled with dangerous gangs, beat-up futuristic vehicles, and all kinds of robots. To create the sense of realism Blomkamp was aiming for, artists were tasked with designing even the smallest details, from the graffiti on favela walls to the tattoos sported by gang members.

"On my first day on the project," explains Beck, "I ran with this concept and quickly mashed together tattoo ideas to detail my take on [Damon’s character Max DeCosta], using a honeycomb look of hexagonal tattoos with various Latin and religious design elements." That design turned into the basis for all of the tattoos featured in the movie. "When it came to the gang stuff we made sure to learn as much as we could about those cultures," adds fellow Weta artist Christian Pearce, "mainly so we could avoid them. We were very careful to create artwork that had a similar aesthetic but didn't specifically reference any of that stuff."

Elysium is also a sci-fi movie, so of course there are fantastic new technologies. Much like District 9, the robots and vehicles feature a weathered, utilitarian look, to further emphasize the class divide at the heart of the film. The exo-skeleton suit worn by Damon's character Max captures that aesthetic: it's not simply something he wears, but something that has to be surgically attached. And the accompanying scene (and concept art) is particularly brutal. 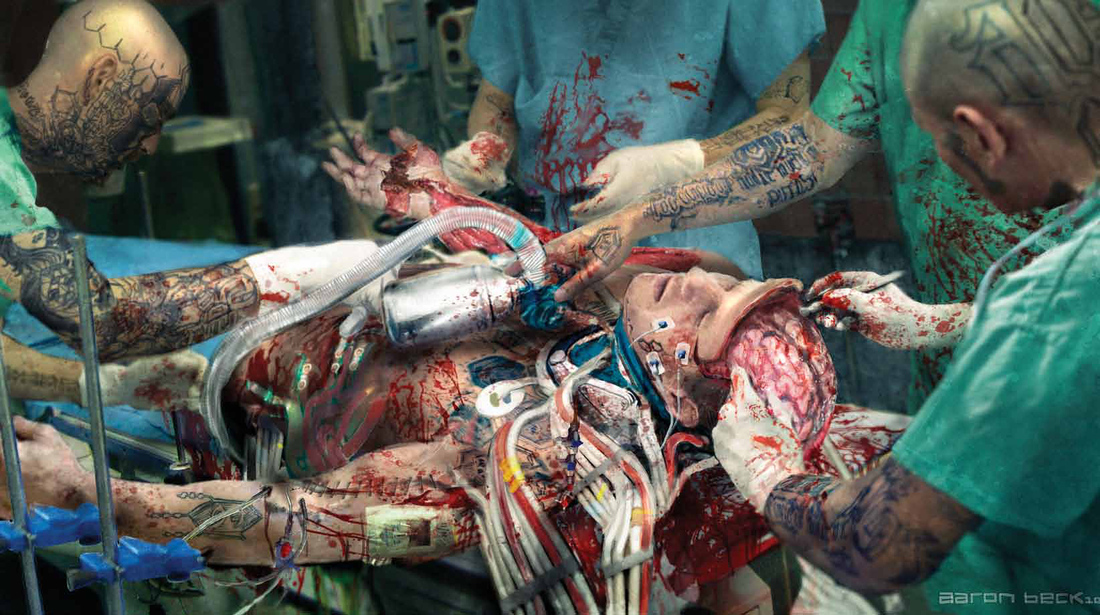 TyRuben Ellingson is an artist and designer who has worked on films ranging from Jurassic Park and Hellboy, to Avatar and Pacific Rim. For Elysium, he helped with several vehicle designs, though only one actually appears in the final product: the villain's shuttle, the Raven. 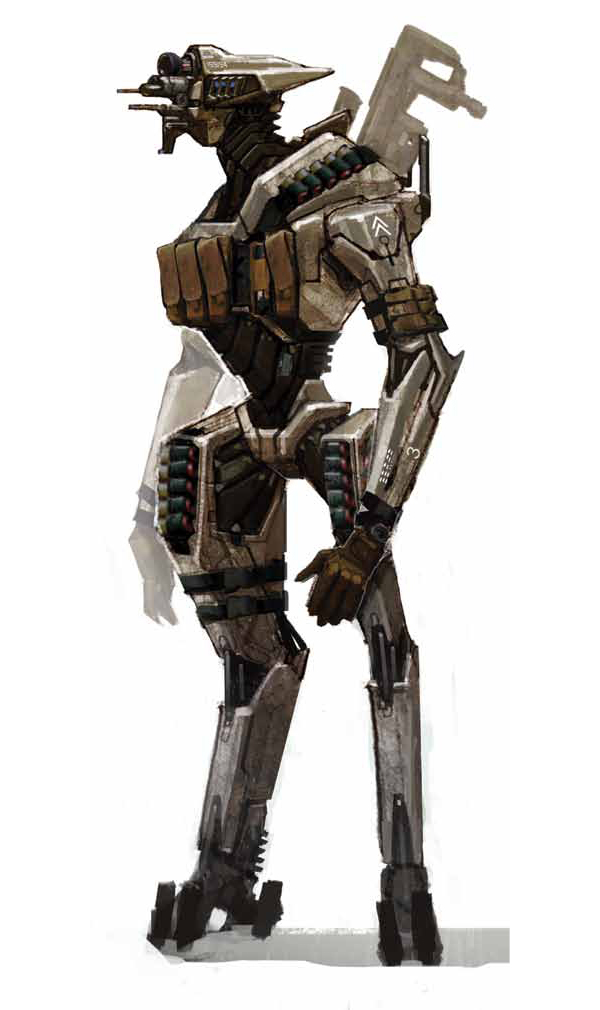 "It was usually a case where Neill would describe things to me in emotional terms and just leave me to it," explains Ellingson. "With regards to the Raven, for example, he might share, 'It's badass, tough military to a degree, but also fast.' And from that I'd take a shot at the design and send that along." However, crafting the Raven came with its own particular challenge: the set for the interior had already been built, so Ellingson had to base his design for the ship around that. "I built the sets quickly and simply in 3D, printed them out on paper and then just started drawing over these with ballpoint pen and markers."

Even though the film features advanced technologies like spaceships and robots, the artists didn’t always have time to research the latest tech. In some cases designs were turned in the same day they were assigned. "Luckily with Neill, we share similar interests and will often know what he's talking about straight away," says Pearce. "Everyone at Weta is pretty tech-obsessed and are always sharing articles — life is constant research! Well, that's what I call mucking about on the internet anyway."

"A lot of research was done in getting the feeling of scale and surface properties right."

However, when it came to designing the titular space station, research was one of the key elements. First the team had to determine the population of the Elysium, and from that extrapolate just how large it would have to be to accommodate everyone. "A lot of research was done in getting the feeling of scale and surface properties right," says the film's visual effects supervisor Peter Muyzers, in The Art of the Film. The station itself is based on the "Stanford Torus" concept, proposed design from NASA in the 1970s, that envisioned space colonies as giant, rotating rings that could house around 10,000 people. Once the details for size and population were nailed down, iconic designer Syd Mead got to work creating concept sketches — a particular treat for some of the other artists working on the movie. "I am a huge fan of his work and it, as it has so many others, had a profound effect on my development," says Ellingson.

While not every idea made it into the film, Blomkamp's focus on visual design appears to have once again resulted in a fully realized sci-fi world. And it's the kind of world that artists want to be a part of. "As a designer who loves trying to create unique work that's informed by a future-thinking solution to a design challenge", says Beck, "it's great to work with a director who operates the same way."