LG's new G2: high-end smartphone in the front, button party in the back

Share All sharing options for: LG's new G2: high-end smartphone in the front, button party in the back

It left very little up to the imagination, but LG has finally, officially, shown off the G2 smartphone it's been talking so much about. The G2 is the company's new flagship, the first without the Optimus branding. It's coming to more than 130 carriers around the world, including all four major American carriers, and represents the company's attempt to take on the iPhone 5, Galaxy S4, and every other flagship device on the planet.

The G2's most unique feature might be its rear-mounted power and volume keys — there are no buttons on the side of the device, instead opting to put everything on the back. LG calls it "a new perspective in smartphone design," and says the decision came from LG's realization that as phones get larger, reaching the buttons on the side or top gets harder. That's certainly true, but we're not sure this is the right way to solve that problem — we'll have to see.

This is a large phone, too. It has a 5.2-inch, 1080p display, yet LG says it's "designed for one-handed operation" thanks to tiny 0.1-inch bezels on either side of the screen. It's slightly larger than the GS4's 5-inch display, and it's an LCD rather than an AMOLED panel. The phone itself is thin, at 8.9mm, but there's top-notch power inside: a Snapdragon 800 processor clocked at 2.26GHz, 2GB of RAM, a 3,000mAh battery, and either 16 or 32GB of internal storage. There's also graphic RAM built into the display, which LG says will reduce the screen's energy usage — with this big a screen it's going to need all the help it can get.

It's huge, but supposedly designed for one-handed use

There's a 13-megapixel camera on the back, equipped with optical image stabilization — LG's slimmed down the technology required for both, so there's no protruding camera parts in the back of the phone. The speaker parts have been slimmed down as well, and the phone comes with Hi-Fi sound that LG says is the first of its kind. (There are even ringtones from the Vienna Boy's Choir, so you can hear "pick up your phone" in four-part harmony.) There's technical, R&D-based innovation everywhere you look, like the second touchscreen connector that let LG slim the bezels and the stepped battery that should allow for even longer life.

LG's known for taking a page or two from Samsung's book, and the G2 appears to borrow the Galaxy S4's penchant for software tweaks and customizations. There's Answer Me, which knows when you're raising your phone to your ear and automatically answers an incoming call; or Plug & Pop, which guesses what you might want to do when you plug in headphones or a USB cable. There's a Guest Mode feature, QuickRemote and an IR blaster, and Text Link, which is a very Google-like feature that guesses what you want to do with a bit of text that you select.

READ MORE: Compare the G2 to the Galaxy S4, HTC One, and Moto X

During LG's event, the company called the G2 "the only smartphone that learns from you." Motorola might have something to say about that, but LG's point is simple – this phone can do everything. There are slight interface changes everywhere you look, from the ability to tap twice on the phone's blank screen to turn it on to contextual copy / paste menus depending on the text you've selected. Each feature comes with its own ridiculous branding, from KnockON to AnswerME — but at least LG's not just calling them L Answer and L Knock.

LG didn't mention price or availability, except that it's going to be a huge, global release for the company. It may not be the most exciting phone we've ever seen, but there's nothing wrong with a little more competition. 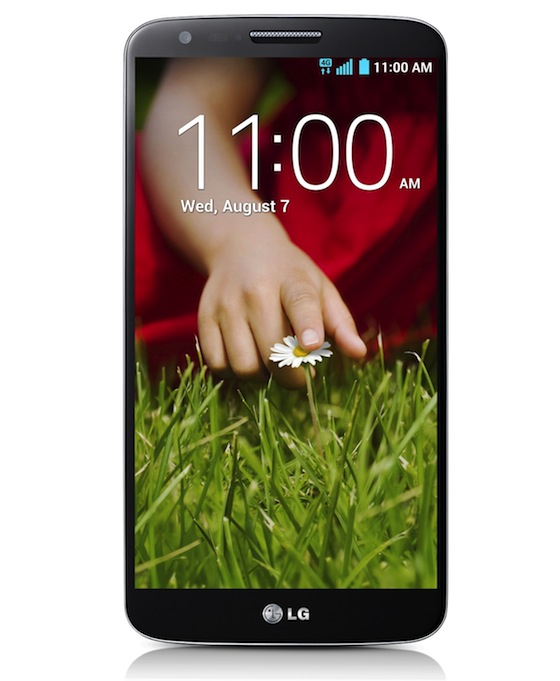