Facebook is gearing up to launch a new News Feed section that will point users toward popular subjects that people across the social network are talking about, according to All Things D. The section will be called "Trending Topics," and it will reportedly launch for a small percent of US users later today — though it may be limited to the mobile website. While Facebook features generally focus on what a user's friends are doing, this new feature will be somewhat different: it'll surface relevant posts from a user's friends, and relevant public posts from people who they don't know.

Some popular topics users might see this week are Jeff Bezos, Shark Week, and Alex Rodriguez — all of which have made big news of late. All Things D has several screenshots of what the new feature will look like on Facebook's mobile website: 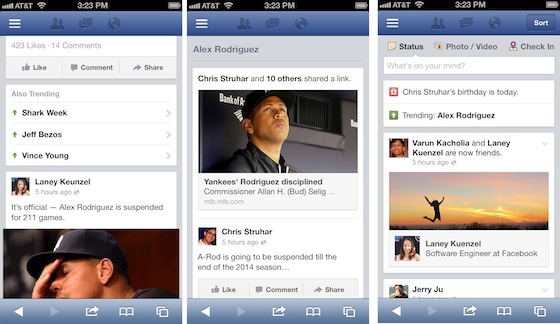 The idea of trending topics comes straight from Twitter, which has long used hashtags to highlight popular subjects of conversation. Facebook hasn't been quick to take inspiration from Twitter, but it's slowly tacked on the short-form social network's features over the years. That includes everything from public profiles, which Facebook has had for several years now, to hashtags, which just launched this June. While Twitter has had little trouble getting its users to share their information — and therefore give users plenty of content to consume — Facebook's activity has long been limited by friend groups.

By adding these Twitter-style features, which promote interaction with the social network at large, Facebook has been able to encourage its users to post more content publicly. Pushing content toward the public sphere has appeared to be an increasingly important goal for Facebook, and a trending topics section should be a natural extension of that.