LG announced its latest flagship smartphone today, the G2, along with some big plans for the big phone: the company's latest will be launching across the globe, eventually landing on all four major US carriers. That should put it in direct competition with today’s most exciting Android devices, as well as the top handsets from Nokia and Apple. The G2 isn't quite a common competitor though — it's slightly larger than much of its direct competition, it's something of a powerhouse, and it has an unconventional button placement that finds the volume rocker and power placed on its back. We're putting it side-by-side with the best out there to see if that's enough to make it stand out. 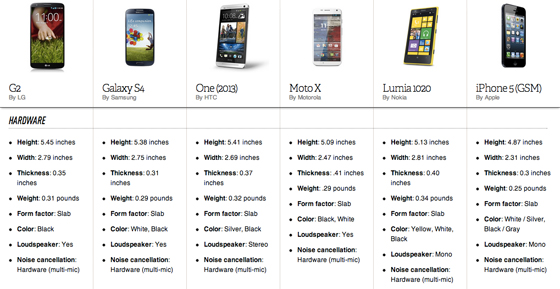 The G2 comes in at a somewhat formidable size compared to latest line of flagship phones: it's taller than both Samsung’s Galaxy S4 and HTC’s One, and it’s slightly wider than all but Nokia’s Lumia 1020. It isn’t the thinnest device on the market either, though it’s at least a bit trimmer than some of the others, including the Moto X.

With all of that extra size, however, LG has built in the largest display of the bunch. The G2 features a 5.2-inch 1080p display that goes nearly edge-to-edge across the device’s front. While that larger size makes it just slightly less pixel dense than its top Android competitors, the G2 ought to look plenty sharp regardless. Such a high-res display may not be necessary for everyone, but 1080p still ends up looking better — even if it’s not by much. In that regard, the G2 stands ahead of the iPhone 5, Lumia 1020, and Moto X, though the casual observer may have a hard time finding the difference.

To make up for the G2’s large size, LG created a unique layout for the device: not a single button is on its front or sides — they’re all located on the phone’s back, just below the camera. It’s an odd setup, though in our initial use of the handset, we found that it actually worked pretty naturally with the way the device was held. 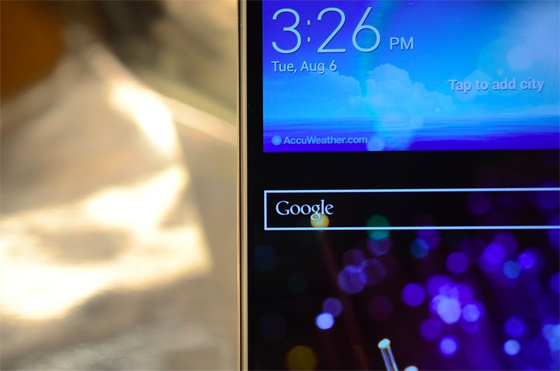 It may not feel top of the line, however, since the G2 has the same type of glossy plastic as the Galaxy S4. Build quality certainly isn’t everything, but when it's compared to the slick and sturdy constructions from Apple and Nokia, or the gorgeous styles available on the Moto X, the G2's aesthetics fall short.

Fortunately, what’s inside counts, and the G2 really makes the most of it. It has a high-end Snapdragon 800 processor — something that very few other devices have at the moment — and backs that up with 2GB of RAM. It also has a 13MP rear camera, which is numerically on the higher end, aside from the insanely high-res Lumia 1020.

Of course, day-to-day, that’ll all be running LG’s highly skinned version of Android. It’s a lot like Samsung’s TouchWiz, which makes it one of the less visually appealing operating systems out there. The G2 does offer a lot of neat features though, like a guest mode and a way to wake the device just by tapping it, but those very additions can be found elsewhere. And when compared to the genuinely useful features being added to the Moto X, it makes the G2’s take on Android shine just a little bit less bright.

Plenty of features, but few must-haves

LG hasn’t said yet when it’ll be sending the G2 onto the market, but when it gets there, it’s likely to have a tough road ahead of it. The device makes some interesting physical changes though, and with its powerful internals and large, high-resolution display, it may be able find some fans.