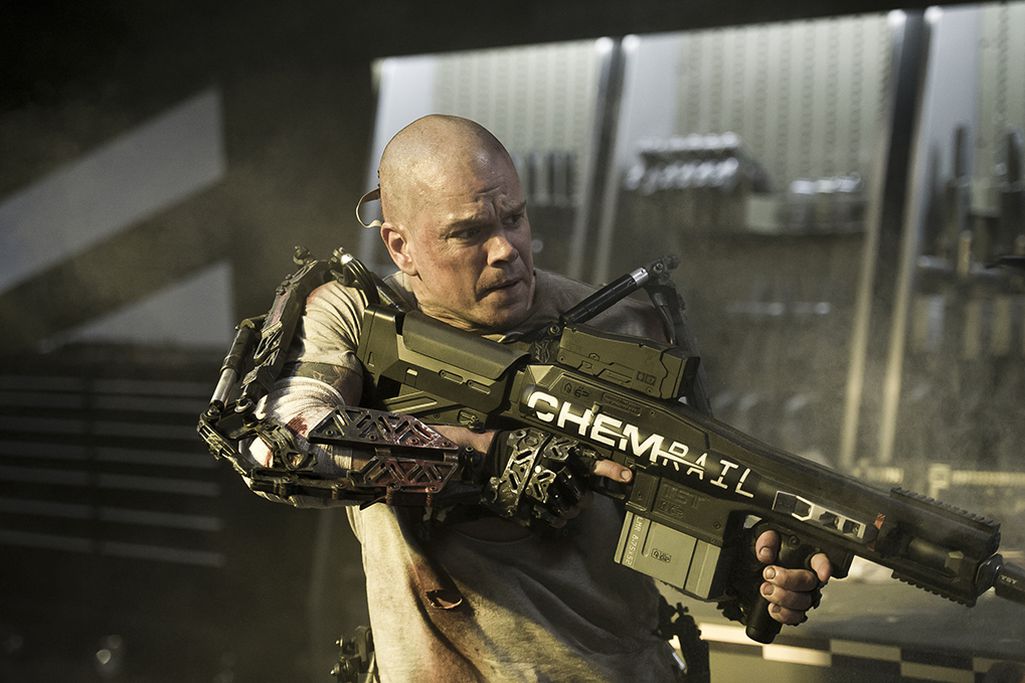 Four years ago District 9 hit theaters, heralding the arrival of a new voice in contemporary science fiction. Writer-director Neill Blomkamp’s alien-invasion film impressed visually, portraying a gritty, realistic world that seamlessly blended humans and digital creations. More importantly, it carried on in some of the best traditions of the genre by serving as intriguing social commentary without stepping on a soapbox — and earned Oscar nominations for Best Picture and Best Adapted Screenplay in the process.

Blomkamp has now returned with his sophomore effort, the Matt Damon vehicle Elysium. With a bigger budget and broader scope, the film portrays a futuristic world where the chasm between classes is the divide between space and Earth itself. In its rush towards sci-fi action spectacle, however, it commits the same mistake as its wealthy space dwellers: forgetting about the human characters that make the whole thing possible in the first place. 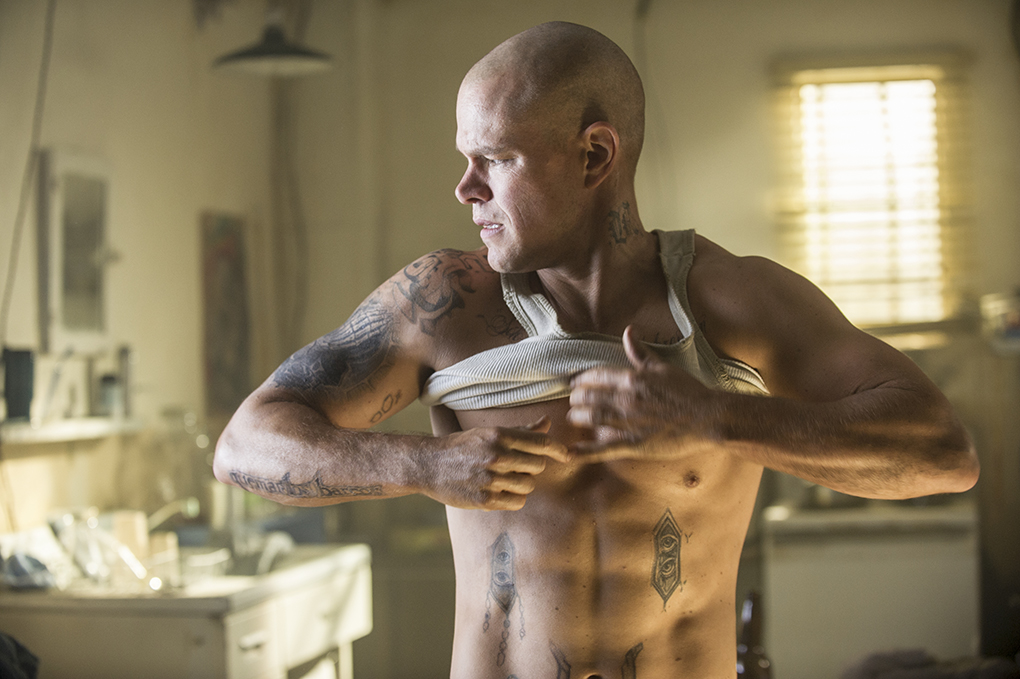 Back on Earth, things are grim

In the year 2154, Earth is overbuilt and overpopulated, so the richest of the rich now inhabit an orbiting space station called Elysium. There they live out their privileged lives, with all physical ailments healed by the high-tech medical pods found in every Elysium home. Back on Earth, things are grim. Max DeCosta (Matt Damon) is a former criminal doing his best to travel the straight and narrow; he even has a factory job assembling robots. One day on the line Max receives a lethal dose of radiation, and with five days to live, he hits up his former criminal colleague Spider (Wagner Moura).

Spider runs a sort of underground railroad, smuggling the sick and infirm up to Elysium so they can use the healing pods. Spider agrees to help Max if he’ll perform One Last Job: kidnap billionaire contractor John Carlyle (William Fichtner), and download his brain so they can steal his secrets. To make it possible, Spider’s gang pops a brain implant into Max’s head — and since that pesky radiation problem is making him weak, they affix a metal exoskeleton onto his body. There’s some tenuous logic to it, but mostly it just serves to make Max a badass man-mech hybrid.

Carlyle is helping Elysium Defense Secretary Delacourt (Jodie Foster) stage a coup, however, and when Max downloads the contractor’s brain into his own he also gets the secret program that can change Elysium forever. Delacourt dispatches her henchman Kruger (District 9’s Sharlto Copley) to find Max, and the chase is on. 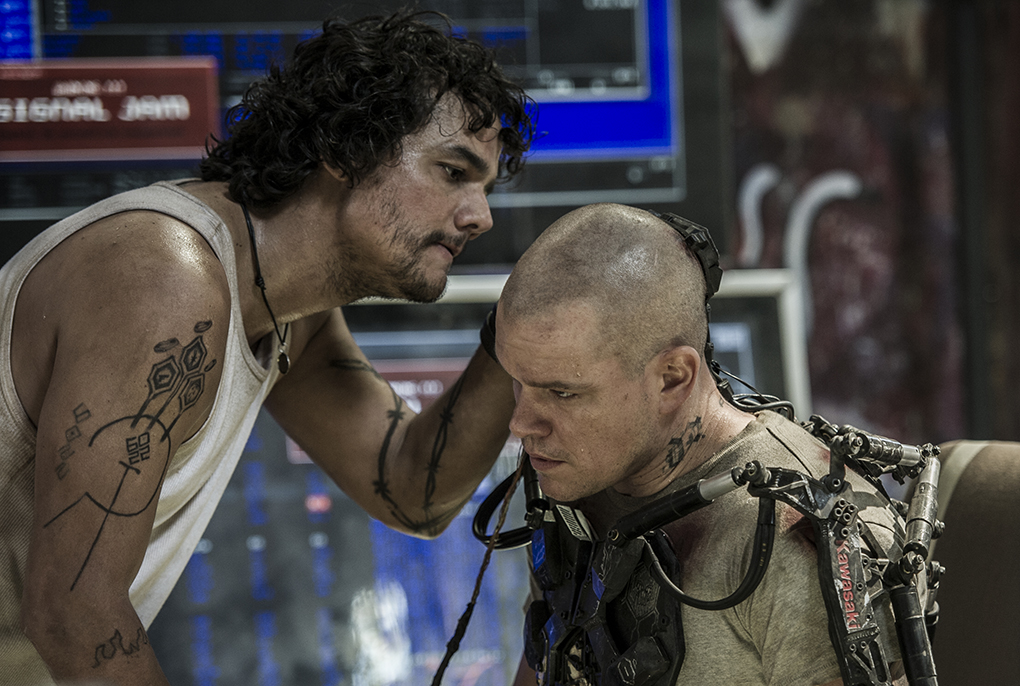 Works at first thanks to detailed world-building 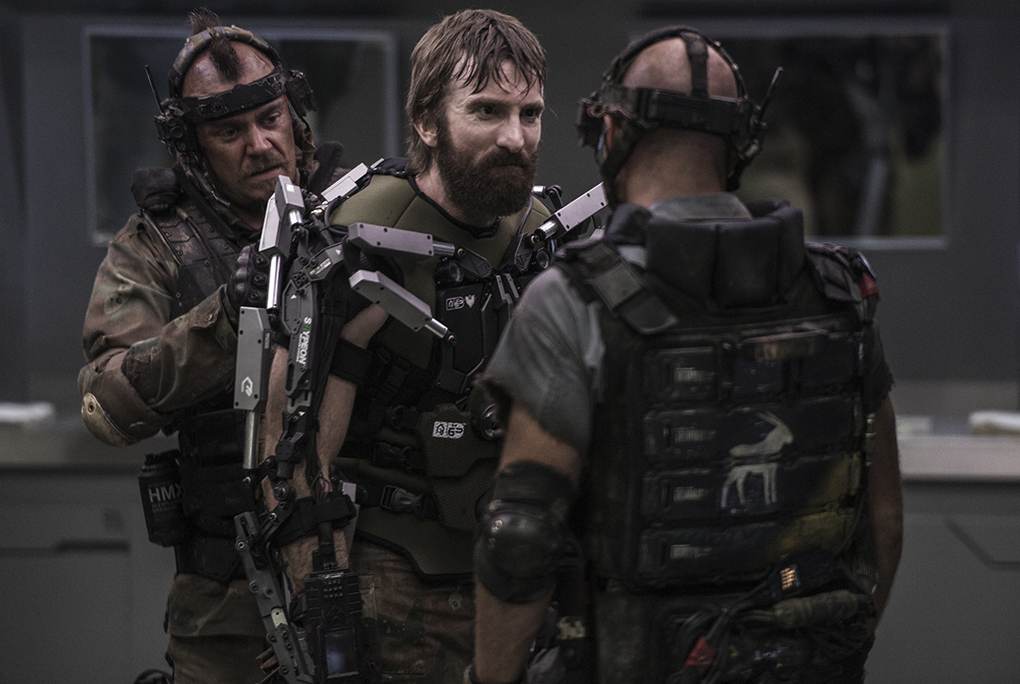 It’s a hodgepodge of ideas and familiar scenarios right from the start, but Elysium works at first largely due to the detailed and fantastic world it’s introducing. There’s a certain suspension of disbelief you agree to when walking into any sci-fi film, and when things are this interesting it’s easy to let early problems slide. It’s clear District 9 was merely a trial run, as Blomkamp unleashes his imagination in every possible direction. From robotic cops and parole officer automatons to inventive spacecraft and the nuanced specifics of the futuristic assembly line, every visual detail has been considered.

Syd Mead contributed to the design of the Elysium, a floating haven full of idyllic green stretches and the kind of ostentatious minimalism only the über rich can pull off. Future Los Angeles, in contrast, is bleached, worn out, and falling apart. It basically looks exactly like District 9 itself, but as a stylistic signature it serves Blomkamp well, allowing him to create a lived-in sense of time and place. Unfortunately, there’s little tying its flat land and shanties to modern-day LA — but in a world this decimated by overcrowding, that may be precisely the point.

Things quickly slow down, however, as the film settles into the familiar, dry rhythms of hunt-and-chase. At first, it’s a joy watching Damon battle with his new metallic frame and an assortment of inventive weaponry, but despite the best efforts of Blomkamp the director, he’s undermined by Blomkamp the writer. The fight sequences become increasingly repetitive, and the choices made by the characters themselves grow more and more ludicrous. It’s the kind of movie where a villain decides to hassle a character with a grenade for no apparent reason — other than to conveniently create a new action sequence and an ensuing set of complications. 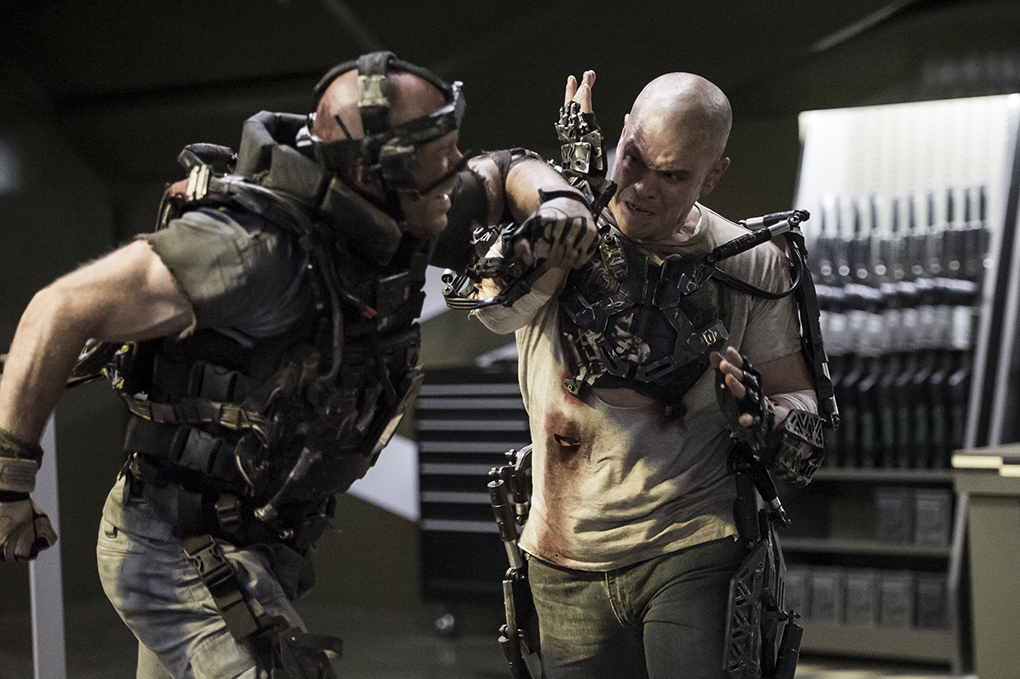 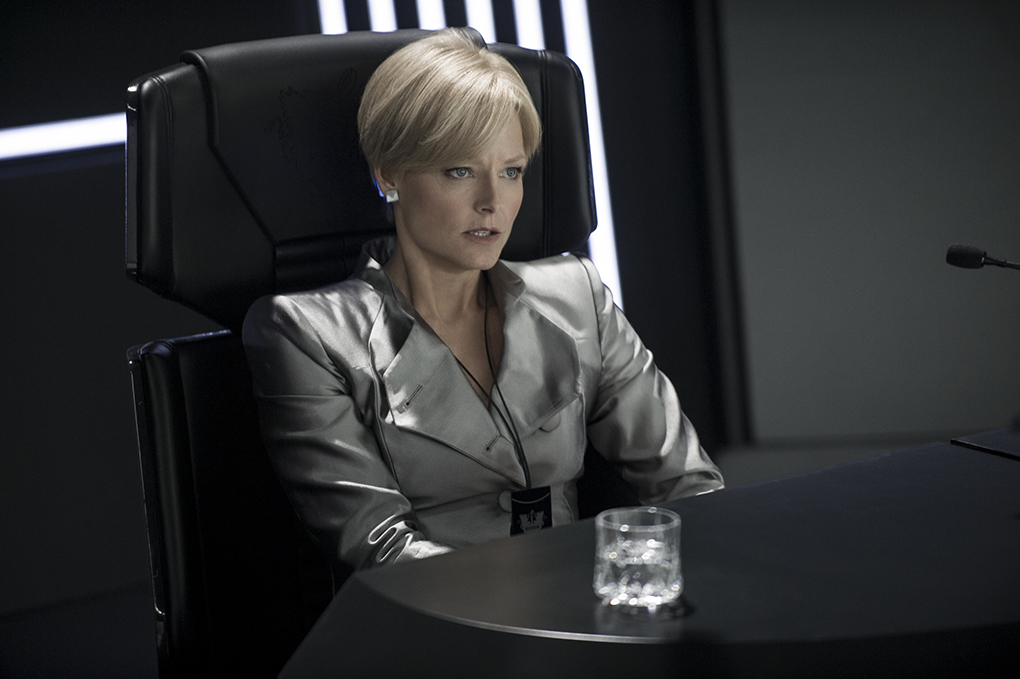 Damon plays Max as likeable and earnest, though he’s a little too nice here; it’s hard to buy him as a criminal or even a genuine smartass. (One also wonders why a guy that lives in a shack and spends his days using an electric screwdriver looks like he does P90X, but that’s another issue.) Jodie Foster, on the other hand, is shockingly off her game, chewing out pieces of arch dialogue with a constantly shifting accent. As Kruger, Copley is good pulpy fun, though he’s given little to do other than play The Guy Who Is Really Crazy (until bad things befall him and he becomes even crazier).

Alice Braga (City of God) brings a welcome, grounded presence as Frey, Max’s childhood friend who just coincidentally has a daughter in need of an Elysium medical pod. Frey is the closest thing the film has to an emotional center, but she and her daughter ultimately serve as nothing more than elaborate plot props, used to set up conflict and clunky emotional payoffs.

For all of Elysium’s glorious visual achievements, it feels like comparatively little thought was given to what humanity would really be like living within this universe. Yes, it uses current political issues as touchstones, calling on everything from the immigration debate to health care reform, but they’re set dressing; there’s no real commentary or exploration. The setup is compelling conceptually, but when it all boils down to a pair of comic book villains there’s just nowhere to go. And for all of Elysium’s focus on gritty, visual realism, its many plot holes suggest a disregard for the same on a human level: medical care on Earth is so poor that people travel off-world to heal themselves, yet Spider’s team can crack open Damon’s skull and he barely has a hangover?

As a forgettable summer action flick it’s no worse than your standard middle-of-the-road fare, but Elysium sags when it could soar, and coming off the heels of District 9 it’s hard not to feel disappointed. Once again, Neill Blomkamp has created a beautifully designed and realized world. If only he’d spent half as much time focusing on the people that inhabit it.

Elysium is now playing. To discuss the movie — spoilers and all — join our conversation in the forums!

Read more: Behind the incredible sci-fi art of 'Elysium'