Matter over mind: scientists begin to observe and manipulate memories

Matter over mind: scientists begin to observe and manipulate memories

New techniques could help with neurological disease, but how far should they go?

If we had the technology to rewire our brains to help remember certain things and forget others, it could help millions of people struggling with neurological conditions, from Alzheimer’s to post-traumatic stress disorder. But it also raises the frightening possibility — depicted over and over again in sci-fi — that someone would be able to use such technology to mess with people’s minds without their consent.

just how far can and should we go?

For good or ill, such techniques are edging closer to reality. In the last few months, several teams of scientists have made enormous leaps in visualizing memories and manipulating them. The work is confined to animals for now, but helping adjust the functioning of the human brain is the ultimate goal, raising the questions: just how far can and should we go?

In June a team of scientists led by researchers at the University of Southern California published a paper explaining that they had figured out a way to watch memories form in the brains of mice and zebrafish in real-time. The paper was largely overlooked by the mainstream press at the time, but its implications for the future of neurobiology are enormous. "This provides a much clearer window [into the brain] than anyone’s ever had before; it’s hard to predict where this will go from here" says Donald Arnold, an associate professor of molecular and computational biology at the University of Southern California who led the team. Using this technique "it should be possible to use this to delete and modify memory in some way," he explains.

"it should be possible to use this to delete and modify memory in some way." 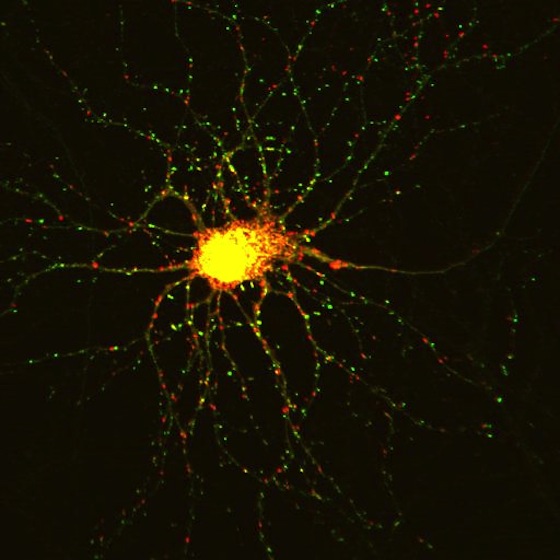 Microscopic image of a neuron in the brain of a living mouse, showing synapses lit up with fluorescent probes. (Credit: Donald Arnold/University of Southern California)

Prior to the work by Arnold and his colleagues, scientists weren’t exactly sure how memories were encoded in the brain. The basic consensus was that whenever you experience something, your memory is stored in neurons — specialized, tree branch-like nerve cells that number in the tens of billions in a single human brain, and which carry information in the form of electrical signals.

Neurons communicate with one another across gaps known as synapses. When an electrical signal carrying information, say a memory, reaches the end of a neuron, it triggers the release of a chemical called a neurotransmitter, which then floats across the synapse and lands on the receiving end of another neuron. Think of pollen floating from one tree to another. If all goes correctly, the receiving neuron picks up the neurotransmitter and fires its own electrical signal, which may cause it to release a neurotransmitter to yet another neuron. It’s this passage of information between neurons that lets your brain function. The vividness of a particular memory is thought to be related to the strength of synapses, that is, how reliably the neuron fires when it picks up a neurotransmitter. But scientists haven’t been able to see this process of memory encoding in action — until now.

What Arnold and his colleagues did was create a protein that sticks to the portion of a neuron responsible for absorbing the neurotransmitter, called the receptor. Then, they took a green fluorescent protein from jellyfish and stuck that onto the other end of their protein. When they implanted their glowing proteins into mice and zebrafish brains, they were able to look through a fluorescence microscope and watch as their proteins collected around the receptors. 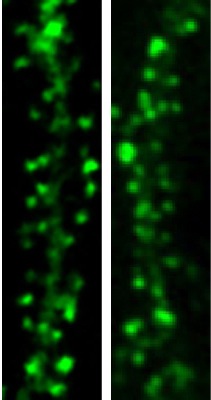 Microscopic image of the dendrite, or electrically conductive branchlike ends of a neuron in a mouse, with glowing proteins showing synaptic strength (Credit: Donald Arnold, University of Southern California).

"This allows us not only to see where synapses are, but how strong they are, by how bright and big these dots are," Arnold tells The Verge. "We can see new synapses forming and old synapses disappearing, and changes in synaptic strength." Arnold says that his team’s next work would involve teaching zebrafish and mice particular tasks and watching to see how their synapses change.

"Ultimately, the experiment we envision is looking at a mouse, having the mouse learn something, seeing how the synapses change, then going back in there and modifying the synapses to see if you can get rid of the memory," Arnold says. Deleting a memory using this technique would involve simply sticking a natural protein made in the brain on to the same protein made by researchers, which carries the glowing material. "It’s like a guided missile, you can put whatever payload you want on it." Arnold says. But, as he says, deleting memories in people using this method "seems way far off to me." Instead, he says, "it would be easier to screen for drugs that would help you forget."

Already, his team has begun work on arming the proteins they’ve made to help delete some other proteins, such as those that build up in the brains of those suffering neurodegenerative diseases such as Parkinson’s and amyotrophic lateral sclerosis (ALS).

"It’s known that the vast majority of proteins in the brain turn over every week or faster." Arnold says. "A week from now, your brain is essentially built from entirely new proteins. Nobody knows how that happens and your memories are retained. It’s crazy." But in neurodegenerative diseases, certain proteins that would ordinarily disappear linger and build up in brain cells, causing memory problems. "A bit of this trash doesn’t seem to get picked up, it just builds and builds," Arnold explains. "Can you get rid of the junk that builds up? Why does it build up? We want to at least start to answer these questions."

Other scientists are taking a different approaching to understanding how the brain stores and transmits information, coming at it from other body parts connected to an animal’s nervous system. For instance, a team of researchers at the Massachusetts Institute of Technology and the Max Planck Institute for Medical Research in Germany reported earlier this week that they’d successfully "mapped" 950 neurons in a slice of retina from a dead mouse’s eye. This technique could have applications for restoring sight and, if applied to the brain, for manipulating memory. 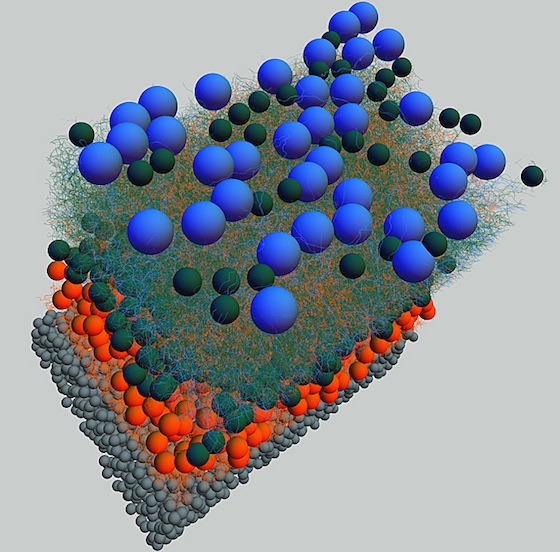 "We can imagine that our wiring diagram of the retina can help scientists down the road design and target retinal prosthetics to the right neurons," says Srinivas Turaga, one of the MIT scientists involved, in an email to The Verge. "And like you suggest with memory manipulation, having a circuit diagram will tell us which neurons to manipulate and how."

"having a circuit diagram will tell us which neurons to manipulate and how."

Turaga and his colleagues created their map of the mouse retina by using an electron microscope to take 3D images of the slice of retina, then having no less than 225 undergraduate students look at the images and physically trace the wiring connecting them by hand, which took a collective 20,000 hours.

He tells The Verge that his German colleagues were working on additional microscopic technology that would be able to image larger slices, and that "we hope that this will eventually allow us to scan a mouse brain in about a year." Turuga says that tracing all those neurons could take up to another 5 to 10 years total. Still, when the researchers achieve that goal, they also hope to use their advances to help treat those suffering from neurological diseases.

"we hope that this will eventually allow us to scan a mouse brain."

Eternal sunshine... on the distant horizon

Although some groups of scientists are getting closer to figuring out just how the brain works to store information, others have already begun tinkering with memories. Last week, a team of scientists led by a different group at MIT made headlines around the world for their success at implanting a "false" memory into mouse subjects, getting the mice to think that they had been painfully shocked in one location, when in reality, they’d been shocked in an entirely different one. The scientists achieved this by stimulating specific neurons in one area of the mouse brains. 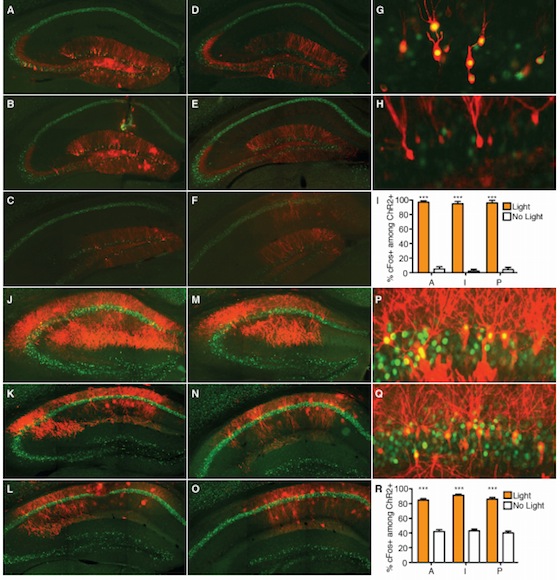 One of the scientists involved in that MIT project, neurobiologist Steve Ramirez, later told The New York Times that he thought it would soon be possible to use similar techniques to delete specific parts of memories. Rather than wiping out the whole memory of a relationship and an ex-girlfriend as in the 2004 sci-fi / romantic comedy movie Eternal Sunshine of the Spotless Mind, Ramirez says "we can get rid of the sad part of that memory," only.

""we can get rid of the sad part of that memory."

Indeed, humans have fantasized about being able to reprogram our minds at will since the early days of written history. In ancient Greek mythology, the souls of the dead were supposed to drink from a river of forgetfulness in the underworld in order to forget their lives and be reincarnated. Aside from Eternal Sunshine of the Spotless Mind, many other stories and movies have tackled the subject of memory manipulation, from Total Recall to Inception to Dark City. But some scientists think that even given all these recent advances, humans won’t and shouldn’t ever get to the point where the scenarios described in sci-fi are possible.

"Those memory-altering techniques are invasive, using either genetic engineering or virus methods to manipulate genes in the mouse brain," comments Joe Tsien, a neurology professor who serves as co-director of Georgia Regents University’s Brain and Behavior Discovery Institute. Tsien would know, given that back in 2008, he and his colleagues successfully deleted specific memories in mice by targeting yet another type of brain protein.

"Memories, whether good or bad, serve an adaptive purpose."

Going forward, Tsien says, "It is unlikely these experimental techniques in mice can be directly transferred for use in wiping a human person's memories." He points out that memories of upsetting or traumatic events are actually crucial to our evolution, teaching us resilience and to avoid certain situations or behaviors that may lead to hardship. Removing them might make a person feel better, but would also doom them to repeat their mistakes. "Memories, whether good or bad, serve an adaptive purpose," Tsien says.