Share All sharing options for: 'Up' director Pete Docter wows with ‘Inside Out’ preview at Disney’s D23 Expo

Every other year, Disney holds what's essentially its own Comic-Con: the D23 Expo. The company uses it as an opportunity to offer previews and unleash a torrent of news across its entire line of properties. Today it delved into its animation slate — and the unquestionable highlight was a look at a new film from Pixar.

Pete Docter's Inside Out has been touted as one of the studio's more experimental productions. It's the story of an 11-year-old girl named Riley whose life is turned upside down when she has to relocate to San Francisco. But as the director pointed out, Riley isn't just the lead character of the film; she's also the setting. The movie takes place largely inside her mind, with her individual emotions portrayed as distinct characters: Anger (Lewis Black), Disgust (Mindy Kaling), Fear (Bill Hader), Joy (Amy Poehler), and Sadness (The Office's Phyllis Smith). 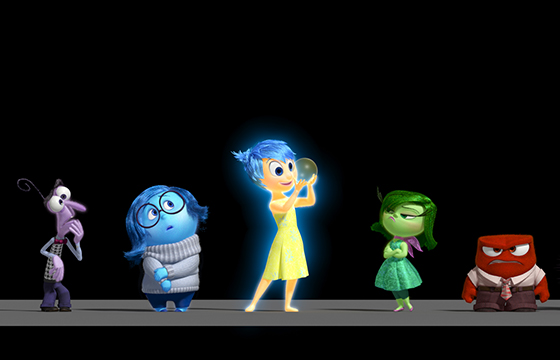 Somewhere between the TARDIS and the Enterprise

The characters operate from their headquarters inside Riley's mind (judging by the concept art shown, it lands somewhere between the TARDIS and the bridge of the Enterprise, with a large display screen centered up front). Different areas of the mind are conceived of as discrete worlds with their own visual styles. A land for imagination, a different one for abstract thoughts (with illustrations that call Picasso to mind), and a world for dream production. According to Docter, Riley's dreams and nightmares are shot there every night, though he said the participants have a fondness for improvisation. The entire world of Riley's mind is connected by — wait for it — the Train of Thought.

It's an ambitious and somewhat abstract concept, and while no footage was revealed Pixar did play an early animatic — and from the looks of things Pete Docter and his team are working on something very, very special. In the sequence, Riley gets in a fight with her parents, and we jump into the minds of both her mother and father. There we see the different elements of each of their personalities at work. Her father checks out, daydreaming about hockey, before putting his foot down (a WarGames-style procedure that requires a drop in DefCon and two operators to run the console). The mother, exasperated at her husband's lack of participation, thinks back to a romance with a dashing helicopter pilot she left behind. It's smart, clever, and funny - but more importantly, it appears to be rich with subtle pathos, something Pixar used to embrace openly but has steered away from in some of its more recent films. Unfortunately the film itself isn't due to arrive in theaters until 2015.

Coming much sooner is The Good Dinosaur. The set-up is simple: what would happen if 65 million years ago an asteroid didn't hit Earth, and left dinosaurs to continue on their evolutionary path instead? Co-director Peter Sohn and producer Denise Ream showed off several clips from the film, including an opening sequence where an asteroid thunders toward our planet... before missing us by that much.

Sohn explained that the dinosaurs in the films are farmers, and each were designed so they could serve as their own farming equipment as well. The lead dinosaur Arlo is an apatosaurus, voiced by Lucas Neff (Raising Hope), with his family making up the rest of the cast. (The father will be voiced by John Lithgow, the mother by Frances McDormand, and Arlo's siblings will played by Bill Hader, Judy Greer, and Neil Patrick Harris).

Takes a page from 'Monsters, Inc.'

From the clips shown the film is definitely lighter and kid-friendly in tone — Arlo galloping around calls nothing to mind so much as a happy labrador — and the movie appears to be taking a page from Monsters, Inc. by throwing a small child into the mix. In this case, it's a proto-human child named Spot that Sohn said is the only one of his kind in the entire world.

The other high-profile movie on Pixar's slate, of course, is the sequel Finding Dory. Director Andrew Stanton took the stage to discuss the film, and while there wasn't any footage shown, casting was revealed for three characters: Dory's mother (Diane Keaton), father (Eugene Levy), and a new sidekick, the beluga whale Bailey (voiced by Modern Family's Ty Burrell). And yes, Albert Brooks' Marlin will be returning along with Ellen DeGeneres as Dory.

Of course, animation is just one element of what Disney is announcing during D23, and while CEO Bob Iger said the company would be "speechless" when it came to Star Wars Episode VII, there's still the rest of its live-action slate — including titles from Marvel. We'll be here all weekend to bring you the latest news as it happens.