Dell did a good job last year when it brought ultrabook stylings to the traditionally drab business market with the Latitude 6430u. This week it’s done one better: it's trimmed the Latitude series down to nearly the size of a Macbook Air, dropped its weight by about a pound, and still kept the removable battery that’s helped to set it just a little bit apart. But with a price tag as high as leading ultrabooks, Dell’s laptops still have to make their case. 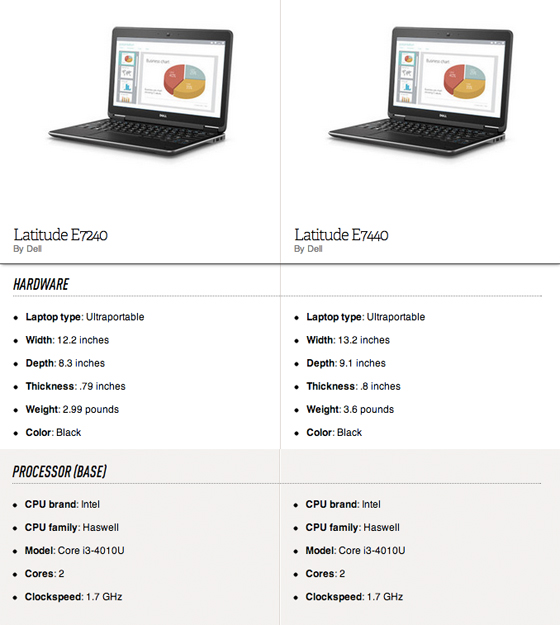 Fortunately, style isn't much of an issue. The good looks on both the Latitude E7240 and Latitude E7440 come primarily from their aluminum finishes. There's also an aggressive tapering along their sides — much like we've seen Samsung use — to help the ultrabooks appear even trimmer. They may not have the absolute sleekest look around, but they channel a composed style that’s worlds better than the chunky gray slabs that have traditionally catered to business users.

But what’s inside of the laptops is a mixed bag. Both machines have middling 1366 x 768 resolution displays — on the E7240 that’s across 12.5 inches, and on the E7440 it’s across 14 inches, further hurting its sharpness. Even so, that isn't significantly worse than what’s found on the 13-inch Macbook Air, and it isn't out of line for a laptop of its class. However, while both Latitudes are on Windows 8, neither come with touchscreens by default. Dell does say that an option for a 1080p touch-enabled display upgrade is in the works though. 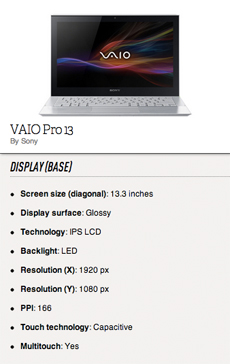 Where the Latitudes really slow down is their Core i3 processors. They're both part of Intel’s Haswell lineup — so they could have some of the battery advantages that come with the chip maker's latest generation of processors — but they're missing major speed-related features like Turbo Boost, which is found on higher-end units. Both machines also have batteries that fall on the lower side of the gamut when it comes to capacity, and Dell hasn't given an estimate on how long they might keep each of the ultrabooks running.

Both Latitudes fall around $1,100: at that price on the consumer side of the spectrum, you’re likely to find faster Core i5 processors, touchscreen displays, and longer-lasting batteries — such as on Sony's VAIO Pro. Even so, while neither Latitude may be the most thrilling laptop out there, they’re able to include business features like swappable batteries and optional fingerprint scanners without falling completely flat.

There were a couple other additions to the database this week:

If you want to learn more about any of the products mentioned above, all of our information on them can be found through the database box located beneath the article. For more on laptops, cameras, and just about every product around, you can check out the full Verge Database right here.