Hot on the heels of the Olympus PEN E-P5 comes the new E-M1, a long-awaited second OM-D camera which features both a small size and interchangeable lenses. The design isn't too much of a surprise — a number of press images leaked early in an odd political move — and it appears as if the E-M1 is built for function over fashion. While it won't evoke the same nostalgia as the retro-designed E-P5, it still packs plenty of impressive features.

According to Olympus, the E-M1 captures the highest image quality of any camera the company has made to date, thanks to the 16.3 megapixel Live MOS sensor backed by the new TruePic VII image processor. The camera has on-chip phase detection autofocus so it's extremely fast, focusing on anything we pointed the camera at almost instantly. Olympus also claims the camera can capture up to 10 frames per second, and I readily believe it given the few minutes we spent with the device. Also, there's no more anti-aliasing filter, allowing the camera to capture even sharper images with improved resolution and quality.

The full frame electronic viewfinder (EVF) is big and gorgeous on the E-M1, looking much crisper and cleaner than last year's E-M5. Olympus has carried over 5-axis image stabilization, which was first seen in the E-M5, which makes a big improvement during video shooting.

The E-M1 also has built-in Wi-Fi, which works in tandem to a mobile phone or tablet app. Unlike the app that connects to Wi-Fi-enabled Sony NEX cameras, we were able to use a Nexus 7 as a real-time viewfinder and take pictures by tapping the screen. There was a bit more lag with the external display compared to the built-in viewfinder, but it was great for remotely controlling the device. There are even some settings adjustments that can be made from the app, including shutter speed, aperture value, ISO, and exposure compensation. 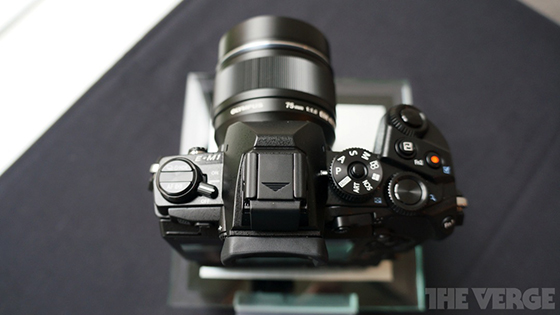 The camera works with all Olympus Four Thirds lenses, but the company is also releasing two new professional lenses to kick off a new Pro line. The first is launching alongside the E-M1: a dustproof and waterproof 12-40mm lens that's set at a constant f2.8 aperture. The second lens, a 40-150mm telephoto zoom, is also rugged and maintains a f2.8 aperture, but won't be available until sometime in 2014.